5 Ways Pregnant Women Can Get More DHA in Their Diets 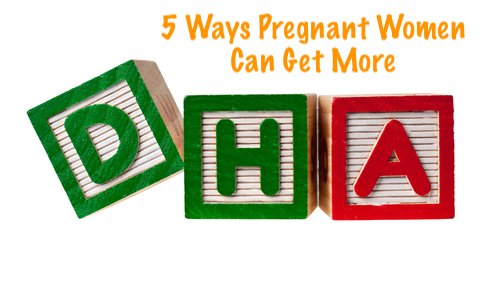 In order to give baby the best start, expectant mothers must ensure they are getting enough DHA (short for “docosahexaenoic acid”) in their diets. During pregnancy, women need at least 200 milligrams daily of this powerful omega-3 fatty acid to support the development of baby’s brain, eyes and nervous system. Plus, getting that daily dose of DHA has been shown to prevent pre-term labor, increase birth weight, and support postpartum mood in new mothers.

However, the majority of moms-to-be are severely deficient in this essential nutrient. Research indicates that most women are only getting around 60 mg/day and that just 1 in 14 actually take a DHA supplement.

It’s estimated that about 80% of women of childbearing age in the US have DHA blood level less than 5%, a suggested blood DHA target for pregnancy. Unpublished data from OmegaQuant found that in a study of 26 pregnant women in their third trimester (when the baby needs most of this nutrient) close to 50% had prenatal DHA blood levels less than 5%. In this particular population, taking 200 mg of DHA per day for 10 weeks within a highly controlled diet was enough to increase DHA levels in all of the women to at least 5%.

Since the human body is unable to make DHA efficiently from other omega-3 fatty acids, dietary intake is very important. Follow these guidelines to be sure you’re getting enough DHA to support a healthy pregnancy:

Low in calories and saturated fat, and high in protein, vitamin D and omega-3s, fish can be an excellent source of nutrition for a developing baby and highly beneficial to expectant mothers. The U.S. Food and Drug Administration (FDA) recommends eating 8 to 12 ounces a week of a variety of seafood that’s low in methylmercury while you’re pregnant or nursing a baby.

Consistently safe options like salmon, trout and herring can be eaten 2-3 times per week and are not only low in mercury but also high in omega-3s, which are shown to be especially important for baby’s cognitive development. White or albacore canned tuna is also a good source of DHA, but should only be eaten once per week due to a slightly higher mercury content.

While many fish prove to be an excellent source of DHA, the FDA advises women of childbearing age to steer clear of high-mercury species like swordfish, shark, king mackerel, and tilefish, which, according to the Environmental Protection Agency (EPA) can be detrimental to a baby’s brain development, vision, cognition and motor skills.

The FDA has released a helpful guide to choosing low-mercury fish, but be aware that not all the fish are rich in DHA. A list of fish that is both high in DHA and low in mercury is included in the Prenatal DHA Test report.

Vegan, vegetarian, or just don’t love the taste of fish? Algae is a great plant-based solution to getting your omega-3s. While consuming oily fish was once thought to be the only way to get adequate amounts of DHA and EPA, an omega-3 similar to DHA. It’s now known that fish don’t naturally produce these omega-3s and only have high levels of them because of their algae-rich diet.

In recent years, DHA has been successfully obtained from algae, which has opened up new opportunities for Vegan and Vegetarian Omega-3 supplements like Nordic Naturals Algae Omega and Vegetology Opti3 Omega-3 EPA & DHA. And research shows, such options can be extremely effective in meeting one’s DHA requirements.

One recent study had 32 healthy adults consume either algal oil capsules or cooked salmon with an equivalent amount of DHA each day for two weeks. By the end of the trial both group showed comparable increases in their blood levels of DHA, leading researchers to conclude that “algal-oil DHA capsules and cooked salmon appear to be bioequivalent in providing DHA to plasma and red blood cells.” Another 2014 scientific review similarly found that algal oil serves as an effective alternative source of DHA.

Algal oil is also a safe option when it comes to protecting the environment. Overfishing occurs when fish are caught at higher rates than they can reproduce, which negatively affects ocean food chains, increases global food insecurity, and destroys coral reefs. Algae-based DHA supplements, often harvested from ponds, represents a much more sustainable choice. Plus, algae don’t contain any heavy metals or toxins so there’s no risk of ocean-borne contaminants.

When it comes to how to pick your fish oil supplement, the key is to choose one that provides at least 200 mg of DHA per serving, to be sure that both mom and baby are properly supported. Taking up to 1000 mg DHA per day has been shown to be safe.

One fish oil supplement to consider is this prenatal offering from Wiley’s Finest. It contains well over the recommended amount of 200 mg DHA, as well as EPA.

In terms of fish oil supplement studies, one showed that these types of supplements could provide neurodevelopment benefits in children, when pregnant or nursing women take them before and during pregnancy.

BLOG: Make Sure You Are Getting Enough of These Nutrients During Pregnancy

Packed with protein, vitamins and minerals essential to a healthy pregnancy, the incredible edible egg can also be fortified with two different omega-3 fatty acids: DHA and ALA (an omega-3 found in plant sources like flax).

Hens fed a diet containing flaxseed, which is known to contain large amounts of ALA, produce omega-3 eggs. When the hens digest the flax, some of the ALA gets broken down into DHA and both fatty acids transfer to the yolk.

The Flax Council of Canada states that chickens fed ALA (as flaxseed) have eggs with an “average of 340 mg ALA and 130 mg EPA+DHA.” However, a commercially available omega-3 egg, GoldEgg Omega Choice, provides only 75 mg of DHA per egg, so it’s important to look at the label when you purchase it.

Some companies add fish oil to the chicken’s feed to further increase the DHA content of egg, like Phil’s Cage Free brand, which offers 150 mg of DHA per serving and 350 mg of omega-3 per egg. (By comparison, the USDA Nutrient Database lists a standard large egg as containing 18 mg ALA and 29 mg DHA).

Also, be sure to eat the whole egg when you buy omega-3 eggs — all the omega-3s are in the yolk!

According to the United States Department of Agriculture, pregnant women should consume three cups of milk each day for calcium, protein, and vitamin D to ensure a safe and healthy pregnancy.

And since DHA is to brains what calcium is to bones, moms-to-be can get the best of both worlds by drinking a fortified milk like Horizon Organic or Fairlife. DHA, calcium and vitamin D stores in baby are based entirely on what they get while in the womb. So, it’s essential to a newborn’s health that the mother gets enough of these nutrients while pregnant.

*The amount of DHA in fortified milks and eggs is relatively low per serving, so they should always be consumed in addition to whatever diet or supplementation strategy an expectant mother is already following.

Check out the following nutritional strategies from Kristina Harris Jackson, PhD, RD, a Research Associate at OmegaQuant Analytics, and inventor of the Prenatal DHA Test to be sure you’re getting enough DHA from your diet:

“The 200 mg/d can also be spread out throughout the week,” says Jackson. She shares the following samples as recommendations:

VIDEO: How Much DHA Needed During Pregnancy is Unique to Each Person