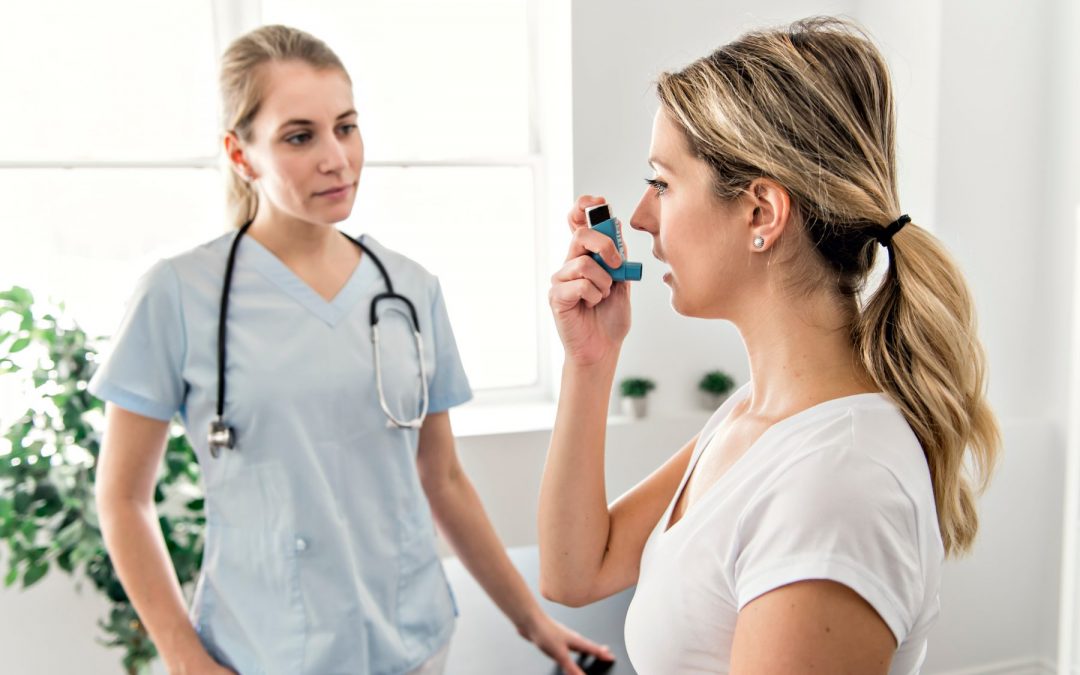 New research shows that having a higher Omega-3 Index has a profound impact on asthma control and medication use.

The National Heart, Lung and Blood Institute (NHLBI) defines asthma as a chronic or long-term condition that intermittently inflames and narrows the airways in the lungs and makes the airways swell. Asthma causes periods of wheezing, chest tightness, shortness of breath, and coughing.

People who have asthma may experience symptoms that range from mild to severe and that may happen rarely or every day. When symptoms get worse, it is called an asthma attack. While asthma affects people of all ages, it often starts during childhood.

Previous studies have examined the association between omega-3 fatty acids EPA and DHA and asthma. Most recently, a study published in Nutrients showed that having a higher Omega-3 Index is associated with better asthma control.

While inhaled corticosteroids (ICS) are considered standard treatment for many asthmatics, researchers say dietary patterns are also being investigated for their potential preventative or therapeutic role.

More specifically, it has been suggested that a Western dietary pattern, high in energy, saturated fats, sugars and salt, may increase the prevalence and severity of asthma, independent of socioeconomic and lifestyle factors, according to researchers. Meanwhile, a Mediterranean dietary pattern, which is nutrient dense and high in fish, fruit and vegetables, could be protective, reducing the incidence and the severity of asthma symptoms. One such way researchers believe the Mediterranean diet might be effective in reducing asthma symptoms is due to the high intake of omega-3s, which come from fatty fish like salmon, herring and sardines.

Research has shown that omega-3s have established anti-inflammatory effects, thus having potential as an adjunct therapy in asthma. The purpose of this study was to compare the Omega-3 Index in adults with (n = 255) and without (n = 137) asthma to determine the relationship between blood levels of omega-3s and clinical asthma outcomes.

Researchers in this study concluded that a higher Omega-3 Index is associated with better asthma control and with lower ICS dose, suggesting that having a higher level of omega-3s in the blood may play a role in asthma management. This is the first study, to the best of these researchers’ knowledge, reporting that a lower Omega-3 Index was associated with poorer asthma control in adults with asthma.

“Considering the high medication burden and reduced quality of life in people with asthma, our study suggests that higher levels of n-3 PUFA could be utilized as an adjunct therapy in the treatment of asthma,” the researchers commented. “Our findings suggest that achieving an Omega-3 Index of 8% or higher could be a beneficial target for people with asthma in order to reduce maintenance ICS dose.”

An August 2018 study produced similar findings in young children. Published in August 2018 in the Journal of Allergy and Clinical Immunology: In Practice, researchers investigated the association between omega-3s and allergic disease in 3-year-olds.

The children in the study were part of a vitamin D trial, which studied pregnant women and their offspring to see if there were any preventive effects of the vitamin on asthma.

Last but not least, parents were asked every three months until children were 3 years old about wheezing episodes, asthma medication use, and whether their child had been diagnosed with asthma by a healthcare provider.

“However, the link between higher omega-3s and less asthma/wheeze was strongest in children who had higher levels of vitamin D at birth, suggesting possible synergy between these two nutrients,” researchers said, cautioning, “Studies following children over time and larger randomized trials are needed to further evaluate this safe and inexpensive potential treatment for childhood asthma and allergies.”

Ultimately, researchers believe, policy changes in school lunches could play a role in providing these nutrients in diets.

This six-month study of 135 children from Baltimore City by Johns Hopkins Medicine researchers showed that having more omega-3 fatty acids in the diet results in fewer asthma symptoms triggered by indoor air pollution. They also found that higher amounts of dietary omega-6 fatty acids may have the opposite effect, and be associated with more severe asthma.

“Our group is working on ways to reduce the levels of indoor air pollution in Baltimore City homes,” said Emily Brigham, M.D., M.H.S, lead study author and assistant professor of medicine at the Johns Hopkins University School of Medicine. “Results are promising, but we don’t want to stop there.”

Brigham notes there is mounting evidence that diet, particularly omega-3 and omega-6 fatty acid levels, may play a role in lung health by changing how the body responds to and processes inflammation. Because children with asthma are already prone to inflammation and respiratory symptoms, the researchers hypothesized that omega-3 and omega-6 intake might be related to asthma severity, and how children responded to the air pollution in their homes.

The researchers recognize and acknowledge that many places where low-income people live are food deserts that lack access to healthy options, and that foods rich in omega-3s may be more expensive. If diet proves to directly impact asthma health, eliminating these barriers will be a key step in reducing health inequalities and in combating asthma disparities in Baltimore City and elsewhere. Brigham says, “Among populations known to be disproportionately affected by asthma, we may find that improving diet and air pollution together has the greatest impact on health.”

While these studies have uncovered positive associations between omega-3s and omega-3 levels and asthma, there are those that have found otherwise.

VIDEO: Who Should Take an Omega-3 Index Test?

A year ago, a study published in the Annals of the American Thoracic Society showed that fish oil does not appear to improve asthma control in adolescents and young adults with uncontrolled asthma who are overweight or obese.

The study authors reported that four grams of fish oil (delivering 3.18 grams of EPA and DHA) a day for six months did not improve asthma control, as measured by a standard asthma control questionnaire, breathing tests, urgent care visits and severe asthma exacerbations.

“We don’t know why asthma control in obese patients is more difficult, but there is growing evidence that obesity causes systemic inflammation,” said Dr. Lang, lead study author and associate professor of pediatrics at Duke University. “Because the omega-3 fatty acids in fish oil have anti-inflammatory properties, we wanted to test whether fish oil would have therapeutic benefits for these patients.”

The 98 overweight/obese participants in the study ranged in age from 12 to 25 (average age: 14.6). All were diagnosed with asthma by a physician but had poor asthma control, despite using a daily inhaled corticosteroid to control their asthma. About half the participants were African American. For every three participants assigned to take fish oil for 25 weeks, one was assigned to take the soy oil placebo.

The researchers also looked at whether a variant in the gene ALOX5 affected study findings. It is known that mutations in the gene can reduce responses to anti-leukotriene drugs. Leukotrienes are inflammatory molecules that play a critical role in triggering asthma attacks. In this study, the ALOX5 variant did appear to be linked to leukotriene production but not to the effectiveness of fish oil in providing asthma control.

The authors wrote that the study’s negative findings may not be the last word on fish oil and asthma. They acknowledged that larger doses of fish oil over a longer period of time may produce a different result.

Based on the current study, however, “there is insufficient evidence for clinicians to suggest to patients with uncontrolled asthma that they should take daily fish oil supplements to help their asthma,” Dr. Lang said.

VIDEO: How Do Omega-3 Levels Affect Cognitive Function in Children?