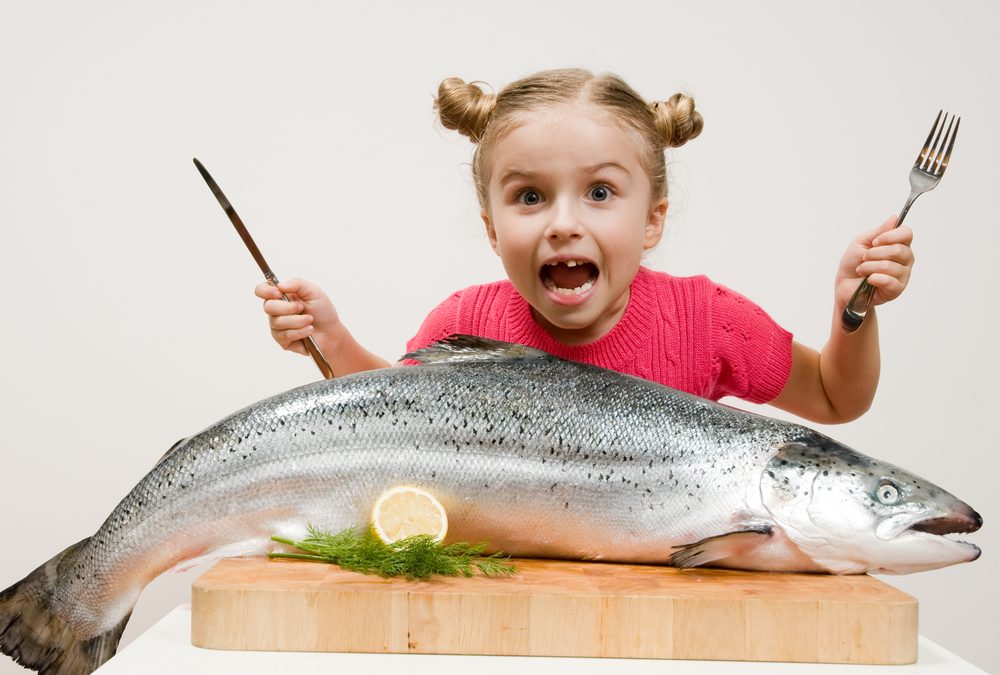 Research published in the June issue of Pediatrics shows that American children don’t eat enough seafood, which could have a negative impact on their health. This is because they are missing out on important fatty acids like omega-3s EPA and DHA, which contribute multiple health benefits for children.

Many types of fish and seafood offer a variety of important nutrients such as vitamins, minerals, protein, and omega-3s, which have been shown to play crucial roles in child brain, eye and immune system development. However, more than 90% of the animal protein children eat comes from other sources like chicken and beef, which offer little in the way of omega-3s.

This new American Academy of Pediatrics (AAP) report — Fish, Shellfish and Children’s Health: An Assessment of Benefits, Risks and Sustainability, from the AAP Council on Environmental Health and Committee on Nutrition — highlights research on the potential benefits and risks associated with consumption of fish and shellfish, reviewing the evidence for their impact on specific diseases or conditions.

Omega-3s have been studied for numerous benefits, including inflammatory bowel disease, neurologic/cognitive development, behavioral and mental health, sickle cell disease, lipid profiles, blood pressure, depression, attention-deficit/hyperactivity disorder and allergic disorders. Yet most of these studies are geared toward adults or pregnant women, so making definitive conclusions about children is difficult in many cases, according to the study’s authors.

More than a dozen observational studies have shown that a mother’s fish intake likely influences the risk of atopy in offspring. Studies have also shown that eating fish early in life — probably before 9 months of age — may prevent allergic diseases like asthma, eczema and allergic rhinitis.

Studies have also shown that a child’s neurodevelopment may benefit from maternal prenatal fish consumption. In fact, one study noted that seafood intake of less than 340 grams a week (¾ pound) during pregnancy was associated with a higher risk of a child ending up in the group with the lowest verbal IQ. Low seafood intake has also been linked to worse outcomes for prosocial behavior, fine motor, communication and social development scores.

The study authors also note that despite concerns about toxicants, evidence-based guidance concludes that seafood, especially low mercury choices, should have a larger place in the American diet. However, they believe more research is needed to substantiate seafood’s specific health benefits in children.

It is important for pediatricians to understand that some fish are a rich source of omega-3s EPA and DHA and that these fatty acids are essential nutrients that must be consumed in the diet. If this is challenging for families, then considering taking a supplement is a great alternative to avoid an omega-3 deficiency in children.

BLOG: How Can You Get Your Kids to Consume More Omega-3s? Let Us Count the Ways…

The study authors say that while humans also can elongate and desaturate short-chain “parent” polyunsaturated fatty acids such as alpha linoleic acid (LA), present in nuts and seeds, into the longer chain omega-3s like EPA and DHA, this process is inefficient and unlikely to result in sufficient levels for optimal health among most individuals.

Fish are the primary natural dietary source to get more omega-3 in children’s diets. These fatty acids can also be concentrated from algal sources and in this form have been added to infant formula and foods such as milk, yogurt, and pasta and increasingly are taken as supplements. Specifically, omega-3s are structural components of neurons in the brain and eye and have anti-inflammatory and immunomodulatory properties, which is why they’ve been studied for their role in neurodevelopment and allergy concerns.

Pharmavite LLC, the makers of Nature Made vitamins, minerals and supplements, announced the publication of a review paper in the May issue of the journal Nutrients, highlighting current research into the roles of choline and DHA in maternal and infant nutrition.

According to national data, more than 90% of Americans do not have adequate dietary intake of choline and DHA. And this is found to be especially true in women of child-bearing age and pregnant women. Choline and DHA play a significant role in infant brain and eye development, with inadequate intakes leading to visual and neurocognitive deficits.

BLOG: 5 Ways Pregnant Women Can Get More DHA in Their Diet

The review paper findings suggest a link between intake of DHA and choline, and that an inadequate intake of one or both nutrients may have an impact on baby’s brain and eye development. Furthermore, emerging findings illustrate a synergistic interaction between choline and DHA, indicating that insufficient intakes of one or both could have lifelong impact on both maternal and infant health, particularly brain health.

Therefore, supplementation of DHA and choline, particularly for vulnerable populations including women during pregnancy and lactation, should be considered.

“This review paper suggests that prenatal care can be improved with a greater understanding of maternal nutrient needs and how an individual’s dietary intake, as well as their genetic and lifestyle factors, may impact metabolism of these important nutrients,” said Susan Hazels Mitmesser, PhD, Vice President of Science & Technology, Pharmavite. “As part of prenatal care, it may be beneficial to include testing of key nutrients such as DHA and choline, to ensure adequate intake levels are being met.”

The 2018 AAP policy statement emphasized the role of nutrition in the first 1000 days of life, including choline and DHA as key nutrients in supporting early neurodevelopment and lifelong mental health.

OmegaQuant Analytics, producer of the original omega-3 blood test, The Omega-3 Index, invented the Prenatal DHA Test to help expecting moms monitor their omega-3 DHA level. The company believes this tool will help women figure out how much of this important nutrient they need in order to support a full-term pregnancy.

Around 10% of babies are born too early each year, and the medical community is still uncertain as to all the reasons why. New research suggests a nutrient deficiency might be at least partly to blame.

DHA has been the subject of several recent studies specifically connecting it with a risk of early preterm birth (before 34 weeks), which is one of the top concerns for doctors and pregnant women. One study showed that taking DHA could reduce this risk by 42%, while another study showed that women with low blood levels of DHA are 10x more likely to deliver a baby prematurely than women with healthy DHA levels.

The Prenatal DHA Test measures the amount of DHA in your blood. It requires a simple finger stick and one drop of blood. For women, DHA is important because studies have shown that those with higher DHA blood levels are less likely to have early preterm birth. For babies, DHA is important for brain, eye and immune system development.

Once women know their Prenatal DHA level, they can personalize their diet to safely change their level in as little as two to three months. Achieving a score of 5% or higher is desirable, while anything below that number is associated with an increased risk of early preterm birth.

Establishing DHA status during the different stages of pregnancy could play a crucial role in preventing prematurity. Until recently, omega-3 intake was confirmed primarily through dietary or supplemental records, but OmegaQuant believes that measuring blood levels of DHA during pregnancy to guide appropriate intake is needed.

“In a study we published in December, we estimated that 70% of women of childbearing age in the US are below the 5% DHA cutoff. There are no known risks to having a DHA level that is too high in pregnancy, except for the potential of carrying a baby past 40 weeks. Still, the longer a baby can stay in the womb, the lower the chances are for complications,” said Kristina Harris Jackson, PhD, RD, a Research Associate at OmegaQuant Analytics. “It’s hard to think of a more important biomarker than prenatal DHA levels, which can be safely and easily modified and has such potentially consequential outcomes.”