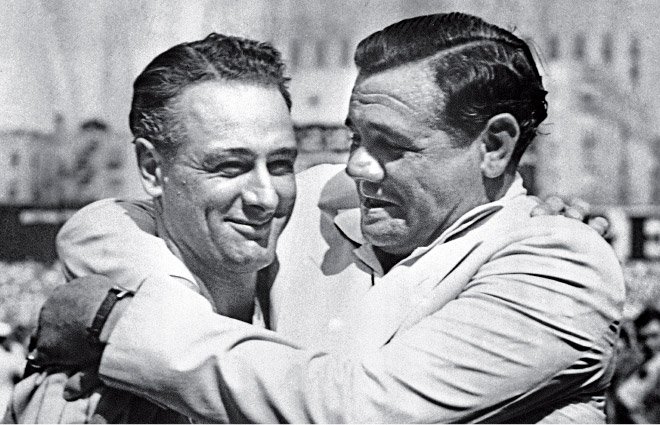 A particular blood fatty acid pattern may help diagnose or predict the prognosis of individuals with ALS [amyotrophic lateral sclerosis], a devastating condition wherein a person slowly loses the ability to control his or her body. ALS was made famous by Lou Gehrig (as shown on the left, next to Babe Ruth), who acquired the disease in the prime of his professional baseball career but still considered himself “the luckiest man on the face of the earth.” Most ALS patients die within 1-5 years from diagnosis from a combination of paralysis and respiratory failure. ALS ramps up the metabolic rate and alters glucose and lipid metabolism. Doctors use a constellation of these metabolic outputs and an ALS-specific quality of life questionnaire called the ALSRES-R to diagnose ALS and disease progression. However, more specific metabolic biomarkers of both the disease could help identify patients with ALS and their stage in the disease with more precision. Fatty acids can reflect changes in metabolism so it was hypothesized that blood fatty acid composition may be a new biomarker of ALS or of disease progression. Dr. Alexandre Henriques and colleagues took this hypothesis and tested it using both case-control and cross-sectional study designs.

A case-control study design is used when researchers want to look at the characteristics of people with a disease (cases) and compare them to people without the disease (controls). In this case, they had 48 cases (with ALS) and 48 controls (without ALS) and they compared their blood fatty acid profiles. While this study design cannot ascribe causality, it does provide a powerful tool to discover new aspects of a disease.

[WARNING: Explanation of SCD ratios includes a foray into fatty acid metabolism. So, either read on and be amazed by the human body or skip to the last 2 sentences]. A commonly used fatty acid metric related to energy metabolism is the SCD ratio, or delta 9 stearoyl-CoA desaturase ratio. SCD is an enzyme that facilitates the reaction that adds a double bond to a fatty acid (by taking away a hydrogen), changing a saturated fatty acid into a monounsaturated fatty acid. SCD ratios are therefore measured by comparing levels of C16:0 (saturated, no double bonds) and C16:1 (monounsaturated, 1 double bond) fatty acids (as well as 18:0 and 18:1). [Note: The fatty acid naming C16:0 means there are 16 carbons and 0 double bonds; C16:1 has 1 double bond]. Higher SCD ratios are associated with both obesity and conditions with altered energy requirements, such as periods of food restriction or high intensity training. During intermittent energy scarcity, the liver converts fatty acids to more “highly energetic lipids” to store for the next bout of energy shortage. Since ALS is characterized by a hypermetabolic state, finding higher SCD ratios in those with ALS makes biological sense. Indeed, they found that ALS patients had significantly higher serum SCD ratios for both 16:1/16:0 and 18:1/18:0 than that of the controls.

The second part of this study was a cross-sectional study, which is where researchers collect a lot of information about people with a common condition at one time (no follow-up). In this paper, they compared the overall health profiles of individuals in various stages of ALS to find what may predict disease progression. Later on, the researchers compared the profiles of those with ALS who were still living and those who had died.

Using 117 ALS patients (including the 48 used previously), a higher 16:1/16:0 SCD ratio in blood pellets (which is mostly red blood cell membranes) corresponded to a slower onset of ALS symptoms compared to a lower ratio. Disease progression was measured using the ALSFRS-R metric. More importantly, those with a “high” 16:1/16:0 ratio had a significantly extended life span of about 11 months compared to those with a “low” ratio. In sum, those with ALS with a higher 16:1/16:0 ratio experienced better quality of life and longer lifespans than those with a lower ratio.

This study demonstrates the value of learning more about what blood fatty acid patterns are telling us. Since the dried blood spot is a stable specimen with simple collection, transport and storage procedures, the fatty acid profile could be used immediately with low doctor and patient burden. At OmegaQuant, we already offer the whole blood full fatty acid profile (Omega-3 Index Complete), which includes 16:0 and 16:1. While we don’t believe there is enough research to support the average person needing to know their “SCD ratio” like we do for the Omega-3 Index, research may uncover greater utility in knowing the full story in each drop of blood.