How Can You Get Your Kids to Consume More Omega-3s? Let Us Count the Ways… 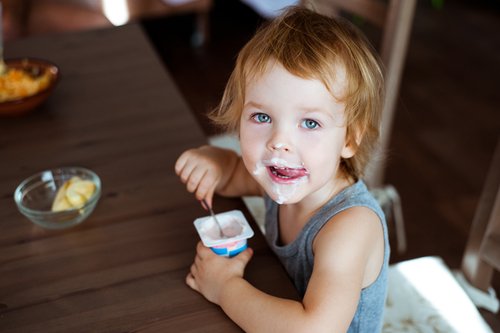 The omega-3s EPA and DHA are incredibly important to your child’s health and development from the time they are in the womb, through their teens, and well into adulthood — from top to bottom, and the beginning to the end of life.

Some of the best sources of omega-3s are salmon, mackerel, tuna and herring. And if your child already eats these on a regular basis, please pat yourself on the back. But if your kid is like most, they probably fall woefully short when it comes to fish intake.

According to the 2016 Fisheries of the United States Report released by the National Oceanic and Atmospheric Administration (NOAA), Americans increased their seafood consumption to 15.5 pounds of fish and shellfish per person in 2015, up nearly a pound from the previous year, making it the biggest leap in seafood consumption in 20 years.

HOWEVER, Americans are still only eating about 4.77 ounces of seafood a week, and that amount is probably a lot lower when it comes to kids. And it’s especially not that impressive when you consider our annual average consumption of chicken and beef, which weigh in at ~60 pounds and ~52 pounds, respectively.

When you are trying to get kids to try new foods, start very small, says a recent Parents article. Using peas as an example, Keith E. Williams, Ph.D., director of the feeding program at Penn State Hershey Medical Center, in Pennsylvania, said you have to make sure you’re not giving your kid a giant bowl of peas.

He claims many parents offer a portion that’s way too large, which can automatically turn kids off from trying new foods. “We usually begin with pieces so small that they could literally be blown away,” he says. At home, try a single pea, part of a noodle, or a crumble of cheese. Encourage your child by saying something like, ‘This is easy — you could be done in a second.’ Once your child eats it, give him a food he does like. Then, at subsequent meals, increase the portion of the new food and phase out the follow-up food.”

The same might work for tough foods like fish too. But the reality is, besides the occasional fish stick (which contains hardly any omega-3s), most American kids are not eating enough fish and therefore not getting their valuable omega-3s. But all is not lost.

Given the significant importance of omega-3s to human health, the last decade has witnessed an explosion of products featuring EPA and DHA in food, beverage and dietary supplement form. From omega-3 gummies to cookies to yogurt and milk, omega-3s are showing up in a variety of applications that are helping kids get a decent daily dose of omega-3s.

The current Recommended Adequate Intakes of Omega-3s for kids are:

But a word to the wise: the “omega-3” claim can be misleading when it comes to food, beverage and even supplement products. Make sure that the products you seek out actually contain EPA and DHA, and not just ALA. While ALA might have health benefits in its own right, many consumers equate this omega-3 with EPA and DHA and the health benefits just don’t compare to getting these two fatty acids directly from the diet.

As the Global Organization for EPA and DHA Omega-3s cautions, “Locating the EPA and DHA levels on food and beverage packaging can be a little tricky. If it is not found on the Nutrition Facts panel itself, you can often find it on the front of the package or by reading the back and side panels.”

If a product says it only contains omega-3s but doesn’t specify the source it comes from, like salmon oil, algal oil or marine sources, or the type of omega-3, namely EPA and/or DHA, then don’t waste your money. It is best to make sure that you are consuming the right omega-3s. Foods fortified with flax or other plant-based sources like chia won’t do the trick.

Below are some product types and examples featuring EPA and DHA that are currently in the marketplace today.

There are several different types of eggs — conventional, organic, cage free, pastured, omega-3 enriched — and their nutritional content varies greatly. According to one study, consumption of omega-3 eggs has the potential to confer health benefits through the increase in intake of omega-3 fatty acids. Other studies on eggs from pastured and free-range hens have showed they contain a higher amount of nutrients compared to their conventional counterparts.

When it comes to omega-3 fortified eggs, there is definitely some confusion in the marketplace, as some eggs contain only the omega-3 ALA, which is ok if that is the omega-3 you are looking for, but it is a very poor converter to EPA and DHA.

Typically, omega-3 eggs are produced by hens fed a diet containing flaxseed. When the hens digest the flax, some of the ALA gets broken down into DHA and both fatty acids transfer to the yolk. One omega-3 egg typically contains 340 milligrams of ALA and 75 to 100 milligrams of DHA.

There are some cases where fish oil is added to a chicken’s feed to further increase the DHA content of egg yolks. For example, GoldEgg Omega Choice contains 130 mg of DHA per egg.

When looking for omega-3 eggs, make sure they are actually fortified with EPA and DHA. GoldEgg OmegaChoice is a great example. 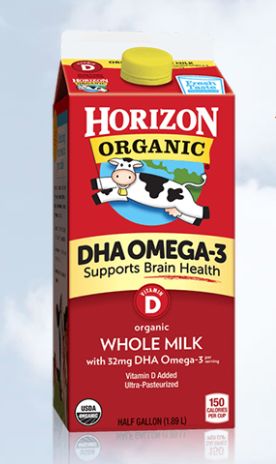 Horizon Organic Milk is fortified with a healthy amount of DHA, which is crucial for kids’ developing brains. The DHA used in this milk is also vegan.

Many milk brands are now fortifying their products with DHA, the omega-3 that is most plentiful in the brain and crucial for early childhood development. According to life’sDHA, “DHA is important for brain and eye development and function throughout the life stages, but is particularly important during the first two years of life and early childhood. Between birth and five years of age, the human brain increases approximately 3.5 times in its total mass! During this time it is critically important that infants and children consume adequate amounts of DHA in their diet to support this period of rapid brain growth and development.”

Typically the source for DHA is algal oil, the kind found in life’sDHA. There are many milk brands that are fortified with life’sDHA. Just look for this on the label to know your little ones are getting a healthy dose of omega-3s that is also vegan. But beware of price. A half-gallon of Horizon Organic DHA-fortified milk costs $4.99, while conventional milk costs on average $4 for a full gallon.

Westhaven Omega-3 Yogurt claims to be the first to contain naturally occurring EPA and DHA from omega-3-supplemented cows.

Yogurts are also being fortified with Omega-3s EPA and DHA. In most cases, producers are using milks that have already been fortified with these omega-3s. In other parts of the world, companies like Tasmania-based Westhaven Specialty Dairy are producing yogurts with milk that comes from omega-3-supplemented cows. They claim to the be the first and only yogurt that contains naturally occurring omega-3 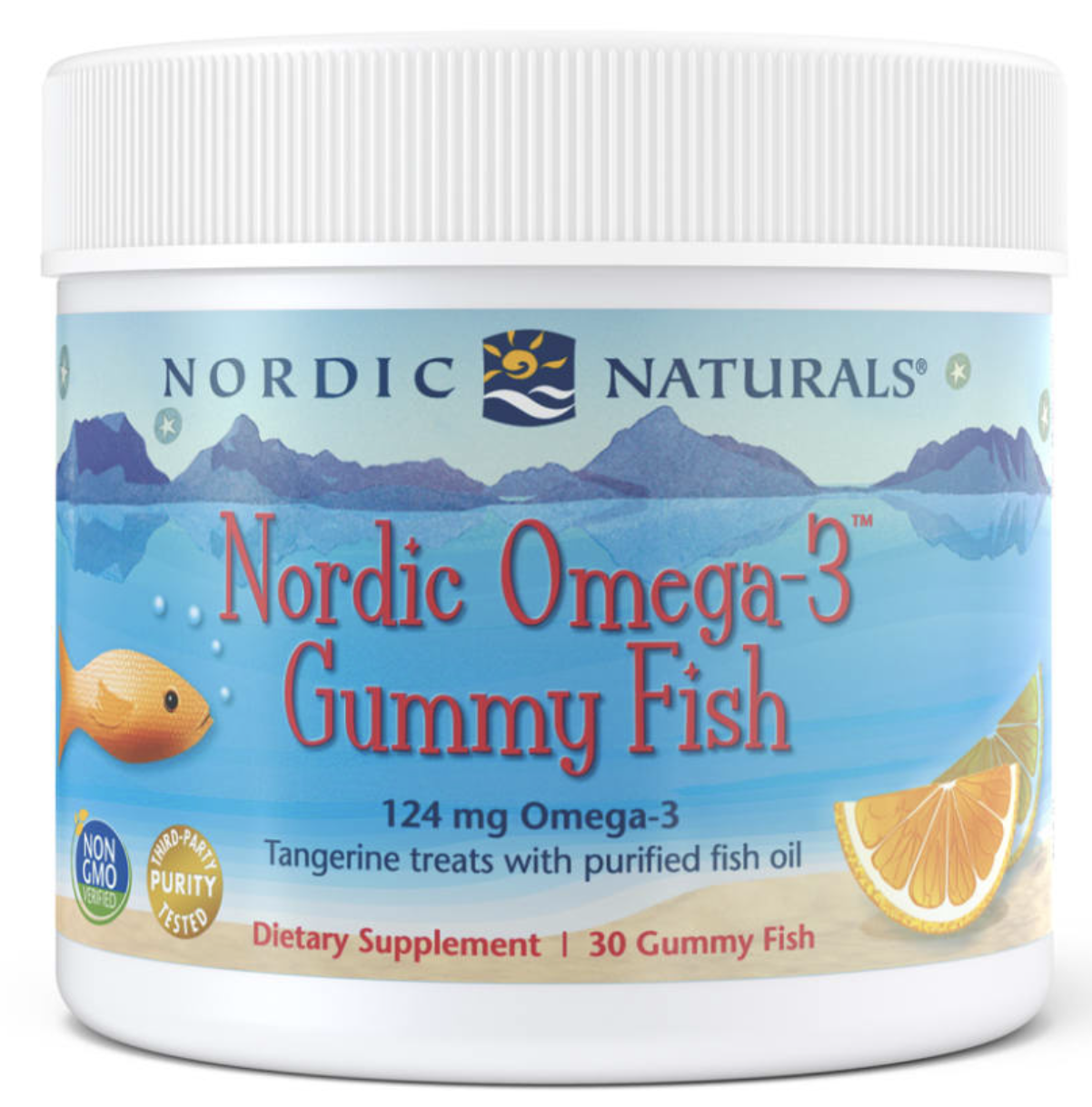 Gummies are so popular with kids, but Nordic Naturals has taken it a step further with its gummy fish and gummy worms fortified with omega-3s.

Gummies represent one of the most popular delivery systems for nutrients, particularly vitamins, and more recently omega-3s. In the US, the market has blossomed to $1 billion in sales; globally it
raked in $2.7 billion in sales. And while they

find favor with kids and adults, gummies don’t pack in quite as much omega-3s as some other delivery systems. Typically the dosage for gummies will average between 32-60 mg of EPA and DHA.

One company that has taken gummies a step further is Nordic Naturals, which boasts a line of gummy fish and gummy worms packed with 100 mg and 50 mg of EPA and DHA, respectively.

If you want to pack a lot of omega-3s in a small dose, consider an omega-3 emulsion.

Emulsions are tasty, potent supplements that are perfect delivery a healthy daily dose for your kids.

These are highly concentrated sources of omega-3s and they taste great too. Technically speaking, an emulsion features a combination of two liquids that normally don’t mix. The word emulsion comes from the Latin word meaning “to milk” (milk is one example of an emulsion of fat and water).

A good example of an omega-3 emulsion is a product called Barlean’s Seriously Delicious Omega-3s. Barlean’s has created a line of emulsions that are particularly popular with kids because they have a pleasing flavor profile, available in several varieties and different concentrations. For these products, the dosages range from 720 mg of EPA and DHA per spoonful to 1500 mg EPA and DHA. These doses will more than fulfill kids’ recommended intake needs.

Omega3 Innovations is the brains behind Omega Cookie, a high fiber, low-sugar breakfast cookie that contains the omega-3s EPA and DHA. Each cookie is full of essential nutrients like vitamin D3, calcium, gluten-free oat fiber and, of course, omega-3 fatty acids — one contains seven regular fish oil capsules worth of omega-3, which amounts to a whopping 2000 mg EPA and DHA! Equally important, there are no processed ingredients such as trans fats, high fructose corn syrup or preservatives, and each cookie contains less sugar than an apple! 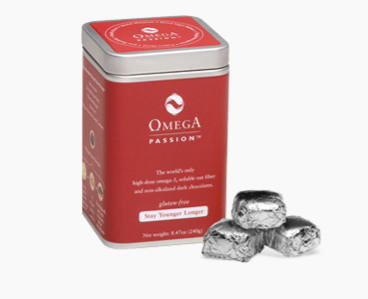 Four of these tasty chocolate treats offer a nice daily dose of omega-3s.

The company has also launched a line of chocolate truffles called Omega Passion that are laced with EPA and DHA – 300 mg per truffle. “Enjoy up to four Omega Passion truffles every day, if you so desire,” the company says. “When you consume four Omega Passion Truffles a day, you’ll cover a good portion of your omega-3 needs, plus you’ll benefit from the oat fiber and antioxidants in the non-alkalized dark chocolate.”