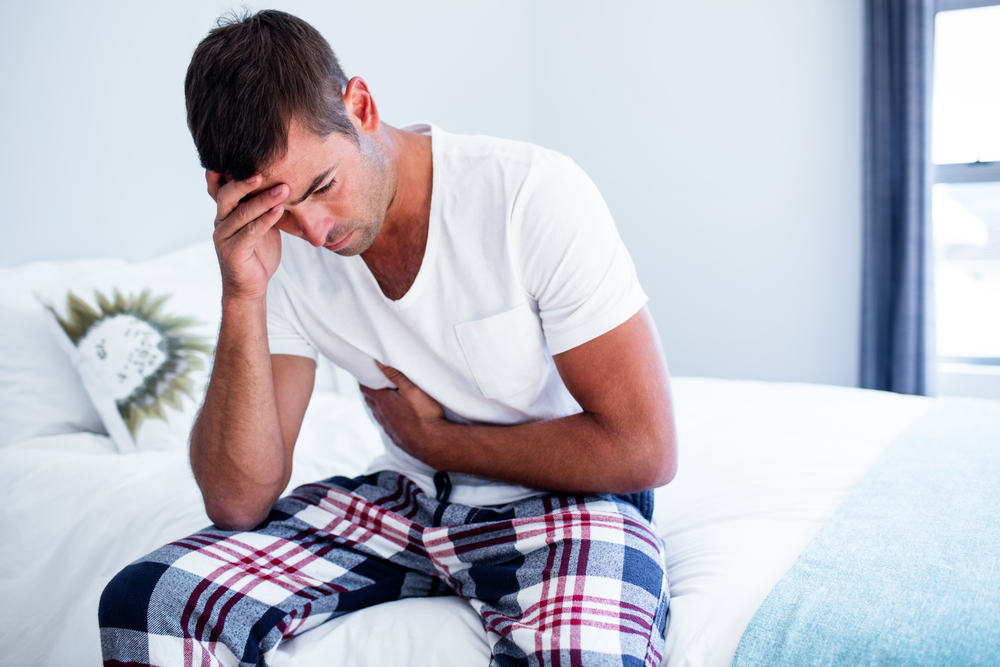 Over the past decade, there’s been a resurgence of interest in vitamin D outside of its traditional role in bone health and calcium homeostasis. Some of the non-traditional roles that have been investigated include possible implications in immune-mediated diseases, such as inflammatory bowel disease (IBD).

The burden of gastrointestinal (GI) diseases in the U.S. is staggering and has been found to affect 60 to 70 million Americans annually. Moreover, a substantial proportion of Americans regularly experience GI symptoms but do not seek care from a clinician. But is low vitamin D to blame for your upset stomach?

What is Inflammatory Bowel Disease?

Inflammatory bowel disease (IBD) is a group of diseases that creates chronic inflammation in the digestive tract. Crohn’s disease and ulcerative colitis are the two most common types of IBD. How common, you may ask? Approximately 1.6 million Americans suffer from IBD. The exact cause of IBD is unknown, but it is thought to be an interaction between genetic, immune system, and environmental factors.

When the GI tract is chronically inflamed, such as with IBD, it produces symptoms like diarrhea, abdominal cramps and pain, bloody stools, and ulcers. In addition to these uncomfortable and sometimes painful GI symptoms, chronic gut inflammation can do even more harm to your health. It can lead to malabsorption of the food that you eat, which over time can cause nutrient deficiencies.

Vitamin D’s role in IBD came about after an association between temperate climates (e.g., northern latitudes with lower sunlight exposure) and high incidences of autoimmune diseases were found. This association stands true for IBD, with higher incidence and prevalence in northern European countries than their sunnier southern counterparts.

Furthermore, research shows that people living near the equator at low risk of developing IBD increase their risk when migrating to developed countries in temperate climates. This well-known north-south gradient of IBD prevalence suggests that vitamin D plays an important role in pathogenesis. Ecologic studies confirm that it is in fact science (not a coincidence), and that lower levels of vitamin D associated with reduced sun exposure could account for the north-south gradient of IBD.

The Role of Vitamin D in IBD and Gut Health

A review published in 2019 that analyzed more than 130 studies found an inverse association between vitamin D and the development of several autoimmune diseases, including Crohn’s disease, ulcerative colitis, and IBD.  Although the mechanisms are not entirely clear, a few suggestions have been made about how vitamin D influences IBD prevalence and outcomes.

First, vitamin D appears to play a role in the innate immune system and inflammatory response. IBD is a chronic inflammatory state of the GI tract caused, in part, by a dysregulated immune reaction. Vitamin D receptors are expressed throughout the immune system, and the positive effects of vitamin D on immunity are well documented.

Vitamin D deficiency has been suggested to play a role in the pathogenesis of IBD and research has found that vitamin D repletion in patients with active ulcerative colitis who were deficient in vitamin D improved objective markers of inflammation. Therefore, vitamin D supplementation may be able to both reduce the risk of IBD development, and support those with active IBD by reducing intestinal inflammation and supporting immunity.

Second, Vitamin D plays a vital role in mucosal barrier homeostasis and in preserving the integrity of epithelial junctions in the gut. A complex and healthy mucosal barrier acts as the first line of defense against invading microorganisms in our gut. Therefore, impairments in this system could have serious negative effects on our health.

In recent years, it has become apparent that the intestinal barrier is compromised at different levels in IBD patients. Consequently, high numbers of microorganisms are allowed to encounter the hosts immune mechanisms, leading to chronic intestinal inflammation. Recent animal data suggest that vitamin D inadequacy can lead to increased susceptibility of the mucous membrane to damage and significantly increases the risk for IBD. Preserving or restoring the intestinal barrier functions may be a therapeutic strategy to prevent and treat IBD.

In a recent study, Schaffler et al. found that vitamin D administration significantly impacted the bacterial composition in participants with Crohn’s disease. Another study confirmed these findings, observing changes in gut microbiota with vitamin D supplementation in patients with multiple sclerosis (another type of autoimmune disease). Gut microbiota restoration may be an effective treatment approach of IBD, and adequate levels of vitamin D may support these bacterial composition changes.

Lastly, there seems to be a genetic association as well. Studies have linked genetic variations in the vitamin D receptor gene to increased susceptibility to Crohn’s disease and ulcerative colitis in several populations. Researchers suggest that either over-activation or under-activation of the vitamin D receptor gene could lead to complications in the immunoregulatory effects of vitamin D, which could lead to an improper immune response, and an increased risk of developing IBD or other auto-immune diseases.

Is Vitamin D Deficiency the Cause, or Effect, of IBD?

However, the truth is likely to fall somewhere in the middle. It appears that even if vitamin D plays a role in the pathogenesis of GI disease, it is also expected that GI disease will exacerbate vitamin D deficiencies if malabsorption is present. Intensified vitamin D malabsorption secondary to GI disease will only worsen the problem. Vitamin D’s role in maintaining GI barrier integrity, gut microbiota, and inflammatory immune responses is essential in decreasing risk for developing IBD and improving symptoms of the disease if it already present.

Vitamin D Might Help if You Already Have IBD

Another study completed in patients with Crohn’s disease found that after 24 weeks of vitamin D supplementation, serum vitamin D concentrations increased above 40ng/mL, and the mean IBDQ score rose significantly. This suggests that restoration of normal vitamin D levels may be helpful in the management of patients with IBD.

Although more human studies are required to confirm, clinical data suggest an association between low vitamin D concentrations and increased disease activity in ulcerative colitis and Crohn’s disease. Therefore, it appears that vitamin D levels should be considered to not only decrease the risk for IBD development, but also treat active IBD by reducing disease activity and improving quality of life.

What About GI Pain not Associated with IBD?

There have been some other reports of GI dysfunction outside of IBD related to vitamin D levels. For children under the age of 5, episodes of diarrhea can be more than an inconvenience but can also cause death if not resolved. Rotavirus is an important cause of diarrhea in this age group.

Furthermore, low vitamin D status isn’t the only thing that can cause stomach discomfort. Symptoms of GI distress such as stomach pain, constipation, and diarrhea have been reported by TOO MUCH vitamin D. Although not very common, vitamin D can become toxic if taken in high doses over an extended period. Hypercalcemia is responsible for producing most of the symptoms of vitamin D toxicity, including diarrhea, constipation, nausea, vomiting, and loss of appetite.
BLOG: Is There Such a Thing as Getting Too Much Vitamin D?

So How Much Vitamin D Do You Need to Support Your Gut?

Vitamin D deficiency is now recognized as a pandemic and research on the negative effects is growing fast. According to research, vitamin D deficiency has also been associated with an increased risk of common cancers, autoimmune diseases, hypertension, mental health problems, infectious disease, and bone disorders such as rickets and osteoporosis. In 2011, the overall prevalence of vitamin D deficiency was 42% in U.S. adults, with the highest rate seen in African American (82%) and Hispanic (69%) populations.

According to current recommendations, serum 25(OH)D levels of less than 20 ng/mL indicate vitamin D deficiency, while levels between 21 and 29 ng/mL represent insufficiency, and 30 to 100 ng/mL represent normal values.

BLOG: Vitamin D Levels Around the World Are LOW

It is important to remember that those with GI dysfunction may not respond to dietary vitamin D the same way those with a healthy gut do. For example, one study in Crohn’s disease patients found that it took 24 weeks of vitamin D supplementation up to 5,000 IU/day to raise serum 25(OH)D3 and reduce Crohn’s disease activity index scores. Interestingly, most patients in this study were on vitamin D supplements at baseline, but the level of supplementation was insufficient to sustain serum vitamin D at adequate levels. No adverse reactions were reported during this study.

Fortunately, most human vitamin D is derived endogenously through the exposure of the skin to UV light (sunlight). Although there is some controversy about sun exposure, there are some benefits to obtaining your vitamin D needs this way. First, sunlight exposure cannot cause vitamin D toxicity in normal vitamin D physiology. Second, this method bypasses the gut. Therefore, if you have any gut issues, you are not depending on vitamin D absorption through the intestine to meet your needs. And lastly, spending time outside can be a lot of fun!

Curious to know how much vitamin D you need each day? We recommend starting with testing your current levels. Since every person’s diet, gut health, and sun exposure differs, every person’s vitamin D requirement will be different. Once you know your current vitamin D status, you can work with a trusted health care professional or use our vitamin D calculator to determine the intake you need to reach optimal levels.