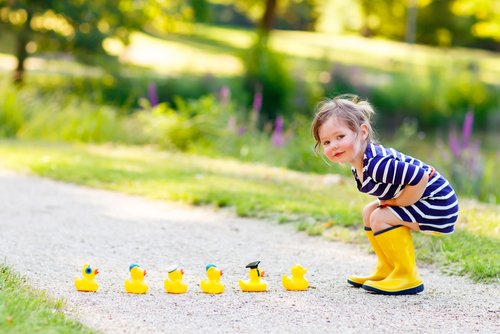 Chances are you’ve heard of or may even know someone struggling with attention-deficit/hyperactivity disorder (ADHD), a brain disorder that makes it difficult to control impulses and be attentive for more than short periods of time. ADHD affects an estimated 8.4 percent of kids and 2.5 percent of adults, according to the American Psychiatric Association(APA).

While it occurs in both boys and girls, the rate of boys diagnosed with ADHD is three times higher than the number of girls diagnosed, and in the majority of cases it lasts throughout a person’s lifetime.

ADHD is often diagnosed in childhood by a clinical interview with a mental health professional. “Technically, in order to be diagnosed with ADHD, a child must have at least six ADHD symptoms of either inattention, hyperactivity-impulsivity, or both. In addition, these symptoms must be present for at least 6 months or longer, be present before the age of seven, and cause significant impairment or difficulties in two or more settings, such as home, school/work or social setting,“ says Leslie A. Hulvershorn, M.D., M.Sc andAssistant Professor of Clinical Psychiatry at Indiana University School of Medicine. Adults, meanwhile, are initially screened using the Adult ADHD Self-Report Scale.

While there is currently no lab test to diagnose ADHD, there is evidence that genetics play a large role in who is affected. According to the APA, three out of four children with ADHD have a relative with the disorder. Those born prematurely, with a brain injury, or with a mother smoking, using alcohol or having extreme stress during pregnancy are also at an increased risk for developing ADHD.

For those who receive a positive diagnosis, the National Institute of Mental Health recommends a combination of behavioral therapy and medication, particularly those with moderate to severe ADHD.

For children with ADHD, behavioral treatment usually consists of educating parents and teachers on how to provide positive feedback for desired behaviors and consequences for negative ones. Through this kind of coaching, parents and teachers can help children manage their attention, behavior, and emotions, and find the most effective ways to respond to the difficult behaviors associated with ADHD.

Likewise, adults with ADHD may benefit from psychotherapy and ADHD coaching, through which they can learn behavioral strategies to help bring routine, structure, and organization to everyday life.

When it comes to medication, the national organization, Children and Adults with Attention-Deficit/Hyperactivity Disorder(CHADD) notes both stimulants and non-stimulants have been shown to be helpful for both children and adults in activating the brain’s ability to pay attention, slow down, and use more self-control.

BLOG: This Is Your Brain on Omega-3s

Stimulant medications are commonly used because they have been shown to be most effective for most people with ADHD, notes the Attention Deficit Disorder Association. Non-stimulant medications have also been shown to be effective and are typically used as alternatives for those who do not respond well to stimulants or if a non-stimulant is preferred. As with all medicines, children taking these drugs must be carefully monitored by their parents and doctors.

There’s promising new evidence when it comes to omega-3s for ADHD research. These long-chain polyunsaturated fatty acids may play a valuable role in lowering the risk of ADHD in children should the mother consume enough of during pregnancy. Omega-3s are known to play a crucial role in the function of the central nervous system, particularly in the third trimester and are vital to baby’s brain development.

The results of a study led by a team of researchers from the Barcelona Institute for Global Health (ISGlobal) suggest that the risk of a child developing symptoms of attention deficit hyperactivity disorder (ADHD) may be controlled by the mother’s diet during pregnancy.

The study, published in the Journal of Pediatrics, analyzed samples of umbilical cord plasma from 600 children in four Spanish regions to quantify the levels of omega-6 and omega-3 that reach the fetus. In addition to these samples, they gathered data on symptoms from two standard questionnaires: the first completed by the children’s teachers at age four years, and the second by their parents at age seven years.

VIDEO: What Else is DHA Good For?

The statistical analysis showed a higher omega-6:omega-3 ratio to be associated with a higher risk (13% per unit increase) of ADHD symptoms at seven years of age.

Previous research has shown that children with ADHD symptoms have a higher omega-6:omega-3 ratio. “Our findings are in line with previous studies that established a relationship between the omega-6:omega-3 ratio in mothers and various early neurodevelopmental outcomes,” commented Mónica López-Vicente, ISGlobal researcher and lead author of the study.

“Although the association was not clinically significant, our findings are important at the level of the population as a whole,” noted López-Vicente. “If a large proportion of the population is exposed to a high omega-6:omega-3 ratio, the distribution for ADHD symptom scores would likely move to the right and the prevalence of extreme values would increase, leading to a negative impact on the community’s health costs and productivity.”

While it’s been shown that omega-3s provide crucial support to baby’s brain development and the overall health of expectant mothers, “this study adds more evidence to the growing body of research on the importance of maternal diet during pregnancy,” commented ISGlobal researcher Jordi Júlvez, a co-author of the study.

“The nutrient supply during the earliest stages of life is essential in that it programs the structure and function of the organs, and this programming, in turn, has an impact on health at every stage of life,” she said. “As the brain takes a long time to develop, it is particularly vulnerable to misprogramming. Alterations of this sort could, therefore, lead to neurodevelopmental disorders.”

Guidelines from the World Health Organization (WHO) recommend that pregnant and nursing women consume an average of 300 mg per day or more of DHA, either by eating fish or taking an omega-3 supplement.

VIDEO: The Omega-3 Index Test is Safe for Children

Because of their positive effects on brain function, omega-3 fatty acids have been identified as a possible treatment (or additional treatment) to neurological disorders such as ADHD. A recent Norwegian study published in Nature looked at the relationship between omega-3 intake and ADHD behavior and found there to be a correlation between increased omega-3 intake and a reduction of attention problems.

Hypothesizing that many people are deficient in omega-3s, which can in turn negatively affect one’s brain cells, researchers based their study around a group of 80 boys, ages 10-14, in the Netherlands, half of which were diagnosed with ADHD.

The children consumed either a margarine enriched with omega-3 fatty acids, or a regular margarine, every day for 16 weeks. The enriched margarine contained 650 mg of docosahexaenoic acid, or DHA, and 650 mg of eicosapentaenoic acid, or EPA—both found in fish oil. Boys with and without ADHD were in each group.

According to the study, the boys had to eat 10 grams of margarine every day (which provided over 1 gram of omega-3s) for 4 months. The boys’ DHA levels (taken via non-invasive cheek samples) and their overall behavior (documented in a Child Behavior Check List by their parents) were monitored throughout the study.

By the end of 16 weeks, results showed that the boys who’d consumed the omega-3 supplement saw a reduction in their attention problems — as rated by their parents — compared with those who did not consume the supplement. Improvements in attention were seen in both children with and without ADHD, but the effect was greatest in those with ADHD.

“Omega-3s are an important building block of the brain. It is abundantly present in the brain’s cell membranes, where it is thought to facilitate the transmission of neural signals,” said study researcher Dienke Bos, of the University Medical Center Utrecht. It’s important for children with and without ADHD to consume enough omega-3 fatty acids. One way to do this, besides supplementation, would be to eat fatty fish once or twice a week, Bos said.