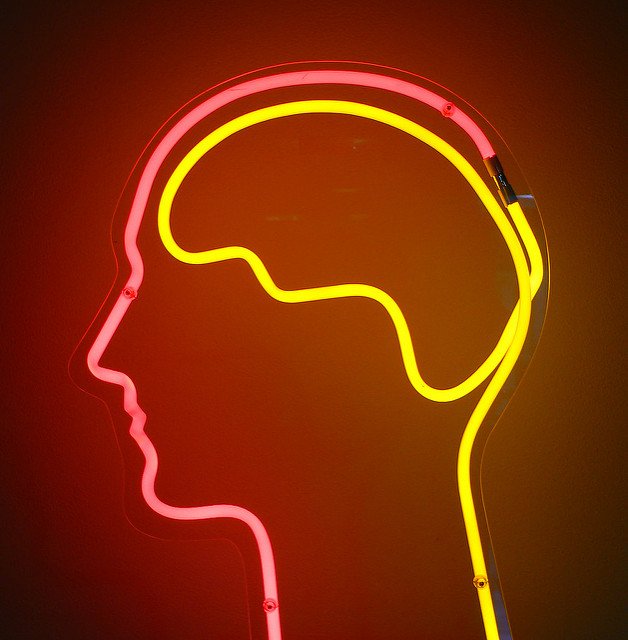 Bipolar disorder is a disorder of the brain that is characterized by periods of depression and mania. Like many brain-related diseases such as depression and ADHD, there is a hypothesis that omega-3 fatty acids, particularly DHA, may play a role in its pathophysiology and possibly its treatment. Drs. McNamara and Welge of the University of Cincinnati School of Medicine performed a meta-analysis on all the available case-control studies that compared the long-chain polyunsaturated fatty acid blood levels of people with (cases) and without bipolar disorder (controls). Importantly, they chose to measure fatty acid levels in red blood cells, like OmegaQuant’s Omega-3 Index, because it is the most reliable marker of DHA status. 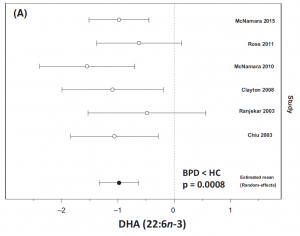 The authors found that DHA levels in red blood cells were significantly lower in individuals with bipolar type 1 compared to individuals without the disorder. The forest plot above shows the effect sizes of DHA levels across the 6 individual studies. Basically, if the lines (95% confidence interval) on either side of the dot (standardized mean effect size) are below 0, that means there was a significant reduction in DHA levels in cases vs. controls. The dot+line at the bottom of the graph is the combined effect from all the studies, which in the case of DHA, shows a robust difference between cases and controls. EPA effect sizes were slightly lower than 0 but not as clearly as the DHA levels. Other long-chain polyunsaturated fatty acids, linoleic acid and arachidonic acid, were not different between cases and controls.

While the authors found a significant deficit in red blood cell DHA levels in those with bipolar disorder, we cannot determine if fatty acid levels played a role in causing the disorder. By the same token, it is unknown if supplementing with DHA to increase red blood cell levels and thereby levels in the brain would help someone with bipolar disorder or prevent the onset of the disease. Those questions must be answered with longitudinal studies or randomized controlled trials. Some of these trials have been conducted and have successfully demonstrated that fish oil supplementation helps with symptoms of bipolar disorder, especially the depressive symptoms. With the effects of DHA on pro-inflammatory pathways and corticolimbic structure and function (the part of the brain affected in many of these disorders), reversing the DHA deficit is a promising hypothesis that could help the people affected by this debilitating disorder.