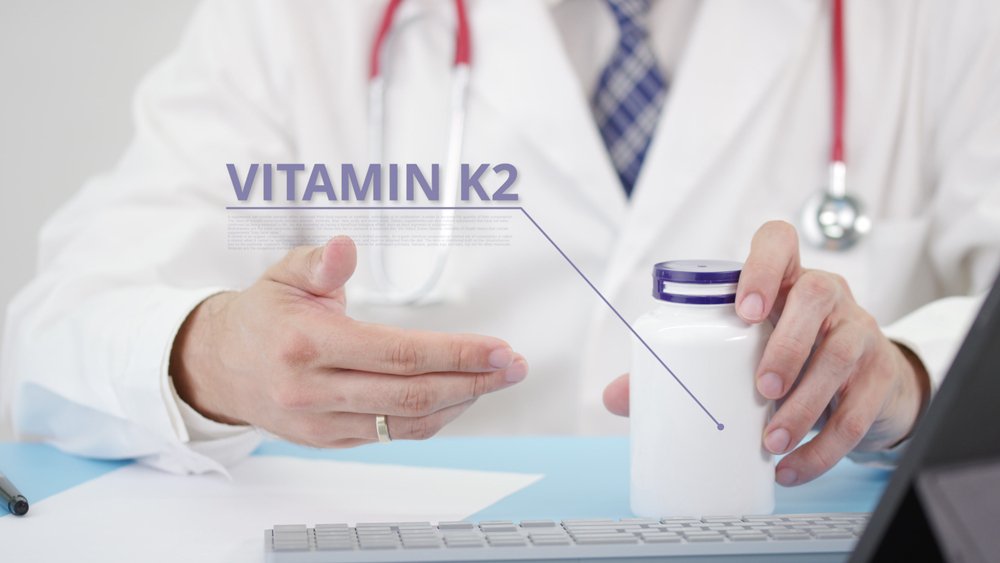 Here’s one we haven’t talked much about on this blog—vitamin K2. It’s not for lack of necessity—make no mistake, vitamin K2 has an important role to play in your health—but for whatever reason, it hasn’t attracted the same kind of buzz as vitamins B, C and D.

You might say that vitamin K is the “kwiet” vitamin (okay, we couldn’t resist), without the public energy of B12 or the loud in-your-face does-it-all vitamin D. However, like its lettered cousins, vitamin K is one of the essential vitamins. It’s also the last of the line of lettered vitamins, which start with A and end with K.

The fat-soluble K vitamins are a group of compounds with similar structures that are needed for your body to produce prothrombin, a protein that encourages blood clotting and regulates bone metabolism.

While there are several different types of vitamin K, it’s K1 and K2 that are most often found in the human diet, according to this article. And, it’s actually vitamin K1 (phylloquinone) that serves up most of the vitamin K we get from our food sources, with about 75-90% of all vitamin K consumed by humans.

On the other hand, vitamin K2 (menaquinones) may offer better absorbability. It’s the one to watch as scientists are exploring the added and independent (from vitamin K1) functional areas where vitamin K2 may be beneficial.

Why Vitamin K2 is Important

While both K1 and K2 are needed for healthy blood clotting and to help prevent, excessive bleeding and blood vessel bruising, this piece discusses some of the emerging science for vitamin K2 specifically in the areas of bone health, heart health, diabetes and rheumatoid arthritis.

For example, this recent review article published in the BMJ’s Open Heart, says there is a strong association with supplementing with vitamin K2 and improved cardiovascular outcomes through the vitamin’s modification of systematic calcification and arterial stiffness. In addition, the authors add that “increased vitamin K2 intake may “…slow progression of vascular and valvular calcification, lower the incidence of diabetes and coronary artery disease, and decrease cardiovascular mortality.”

BLOG: New Research: B Vitamin and Omega-3s, Better Together for the Heart

But, say the authors, there is more work to be done to “…establish vitamin K2 as a safe, cost-effective, and efficacious supplement for preventing and improving cardiovascular outcomes.”

This article too sees potential benefit for vitamin K2 in reducing the risk of bone fractures, slowing cancer cell activity, and reducing the recurrence of liver and prostate cancer. But the authors also advise, that “…much more research is needed.”

While vitamin K1 is found in leafy greens, some other vegetables and some plant oils, vitamin K2 may not be as abundant in our conventional diets. Or perhaps not found in as many healthy options as K1.

There are three main food categories that are rich in vitamin K—animal products, fermented food, and some dairy.

Now when we say “animal” products, no one is suggesting that you ingest dog food, let’s make that clear right away. We’re talking about specific types of organ meats—the organs of animals that are eaten. For example, liver (e.g., beef liver, chicken liver) and sweetbreads (not exactly your daily delicacy for most people).

BLOG: The ABC’s of B Vitamins

As for fermented foods that are rich in vitamin K2, try sauerkraut, natto (made from fermented soybeans) or kimchi. Not all dairy products are rich sources for vitamin K2, but some cheeses are (e.g., Muenster, Camembert and aged Gouda). Egg yolks are a good source, but only those from chickens that get vitamin K2 in their diet. There are 2.1 micrograms of K2 in about a tablespoon of butter, but how much butter can you eat in a day (okay, that’s a rhetorical question). Read more here.

Some experts say that diet alone gives us enough vitamin K. But others say we’re not getting enough specifically of vitamin K2. So, while you may be able to get your daily recommended vitamin K from food alone, that’s something to keep in mind. The average daily recommended amount of vitamin K you need—there’s not a distinction between K1 and K2—begins at birth (2.0 mcg) and men 19 years and older require the most (120 mcg). If you don’t fall into those categories, you can get more information more specific to your sex and age here.

You can add vitamin K—and specifically K2—to your diet through the addition of dietary supplements.  Here are seven tips:

What Happens When You Don’t Get Enough Vitamin K2?

There are consequences to not getting enough vitamin K. And this article explains that up to 31 percent of adults may be insufficient—and may not even know it.

Some populations are more prone than others to vitamin K deficiency. For example, people with celiac disease or other gastrointestinal disorders (such as colitis, pancreatitis or inflammatory bowel disease) are at greater risk. These conditions, and also having cystic fibrosis, may make vitamin K absorption more difficult.

And if you’ve had a small bowel resection or have had part of your intestine removed, or have kidney issues, you should talk with your doctor about vitamin K.

BLOG: Do Omega-3s Thin the Blood

If you’re taking certain medications such as antibiotics or anticoagulants—especially for long periods of times—you might be more susceptible to a vitamin K deficiency.

And newborns may be at risk, especially because there is not a lot of vitamin K found in human milk. Some experts, including those at the American Academy of Pediatrics, recommend a single shot of vitamin K at birth to prevent low levels of the vitamin, which can lead to dangerous bleeding in newborns and infants.

How do You Know if You Have a Vitamin K Deficiency?

Here are some things to watch for:

If you suspect you may be low in vitamin K, talk to your doctor about what test if any are appropriate. For example, a prothrombin time (PT) test will measure how long it takes for your blood to clot. But be aware that these tests are not regularly ordered, especially without symptoms. However, they are especially used for patients taking the blood thinner warfarin. And, be aware that if you’re taking vitamin K supplements or getting large amounts of vitamin K from your diet, your test results may be affected. Read more here and here.

Here’s how that works. If the results of the PT test are thought to be a result of low levels of vitamin K, then your doctor may recommend a vitamin K injection or adding vitamin K supplements to see if the bleeding issue can be resolved in that manner. If the problem is resolved, it’s likely that a vitamin K deficiency was the cause and you’ll need to discuss with your doctor how to maintain vitamin K sufficiency.

You can also talk to your doctor about a serum Vitamin K test to determine your blood levels of vitamin K1.

Apparently testing for a lack of vitamin K2 is not as common according to this post because vitamin K2 is challenging to measure. So, labs measure the proteins that vitamin K2 activates. But as vitamin K2 becomes more popular and more benefits are uncovered, there may be more focus on vitamin K2 testing. Stay tuned.

VIDEO: What are the symptoms of a B12 deficiency?