Fish during Pregnancy – Friend or Foe? 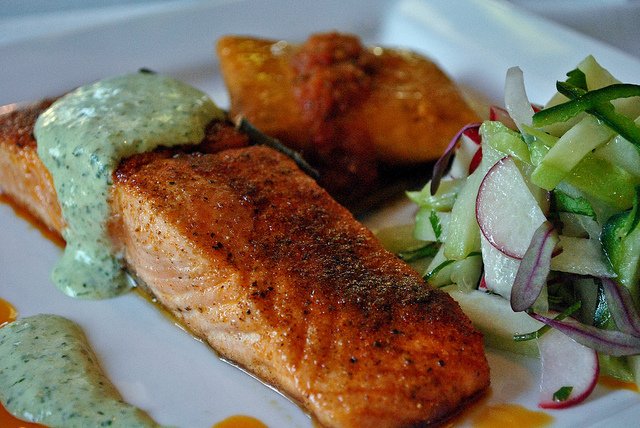 The decision for a pregnant woman to eat fish is not easy. They may hear: “Avoid fish high in mercury,” or “only eat oily fish,” or “NO SUSHI!” The reason there are so many stipulations on fish intake for pregnant women is because fish are a source of both methyl mercury (which can be damaging to the brain of the growing fetus) and essential polyunsaturated fatty acids (PUFA), such as omega-3 fatty acids EPA and DHA (which are important for brain development).  You can see the conundrum. A recent study by Strain et al. published in the American Journal of Clinical Nutrition tried to tease apart the relationship between these two components of fish and child development.

The authors have been studying mothers and children in the Republic of Seychelles since 1989 through the Seychelles Child Development (Nutrition) Study.  The Republic of Seychelles is a 115-island country off the eastern coast of Africa in the Indian Ocean where fish intake is very high. On average the mothers in this study ate fish 8.5 times per week – that’s more than 1 meal per day! As a comparison, the US government recommends 8-12 oz per week of a variety of fish that are lower in mercury for pregnant women; that equates to only 2-3 servings. Unfortunately, it is unlikely that these recommendations are being met since the general US population does not meet current fish intake recommendations (Papanikolaou Y, et al. 2014).

Because of their high fish intake, this group of 1265 mother-baby pairs in the Seychelles islands is a perfect population in which to observe the effects of methyl mercury and PUFA on child development. The main objective of this study was to see if there was a relationship between prenatal methyl mercury exposure (as measured by mother’s hair levels of mercury) and maternal intake of PUFA (as measured by questionnaires and serum levels of PUFA) with tests of psychomotor skills, communication, behavior and general development (as measured by questionnaires as well as direct observation of the children) in their 20-month old children.

First, they did not observe any relationship between the moms’ methyl mercury levels during pregnancy and neurocognitive outcomes in the babies.  This does not mean methyl mercury is safe and that pregnant women can eat any kind of fish they want, but it is encouraging that high fish intake appears to be safe for the growing fetus.  Second, the mothers’ DHA blood levels were related to better language development in their toddlers.  This supports previous work in this population that found maternal serum DHA levels were positively associated with language development in 5-year-old children (Strain JJ, et al. 2012).  Third, blood levels of DHA in the mothers were associated with worse mental development scores in the children. The authors suggest that where DHA is abundant (in high fish-eating populations) the limiting factor in mental development may be omega-6 fatty acids, specifically arachidonic acid (AA). On the other hand, when AA is plentiful and DHA low in the diet (as in the US), higher DHA levels are beneficial for mental development. More research is needed to better understand this relationship. Other interactions between DHA and methyl mercury status yielded complicated but generally positive findings for omega-3s or a lower omega-6:omega-3 ratio.

The main take away from this study is that the level of methyl mercury exposure that occurs when a population eats fish daily is not adversely affecting child development.  Based on studies like this one, in 2014 the US government simplified its recommendation to pregnant women: eat fish but choose wisely.

(Note: Sushi is still not recommended because it is raw, not cooked, fish).