What is the rationale for the Trans Fat Index cutpoints (low, intermediate, and high)?

The cut points were derived from a combination of two sets of data. First, based on over 27,000 samples analyzed at OmegaQuant Analytics over the last few years, we have an idea of the distribution of the Trans Fat Index in the US population. Second, we used published data from Sun et al. (Circulation 2007;115:1858-1865) in the Nurses’ Health Study. These researchers measured levels of industrially-produced trans fats in red blood cell membranes and related those levels to risk for cardiovascular events. They found a statistically significant, direct relationship between the Trans Fat Index and heart disease – higher levels were associated with higher risk. Those women in the highest 25% of the population (4th quartile) were 2.8x as likely to have a cardiac event as women in the lowest quartile. 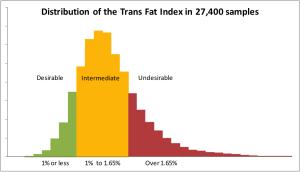 Since we still need more data to really know what the “healthiest” level of trans fats would be, it is more important for the consumer to see a decrease in his/her Trans Fat Index after making healthier dietary choices than for the consumer to be in a specific risk group. In other words, lowering the Trans Fat Index from whatever level it is at the start shows good progress and would be expected to lower heart disease risk.