From Blood Pressure to Pregnancy: US FDA Recognizes the Power of Omega-3s 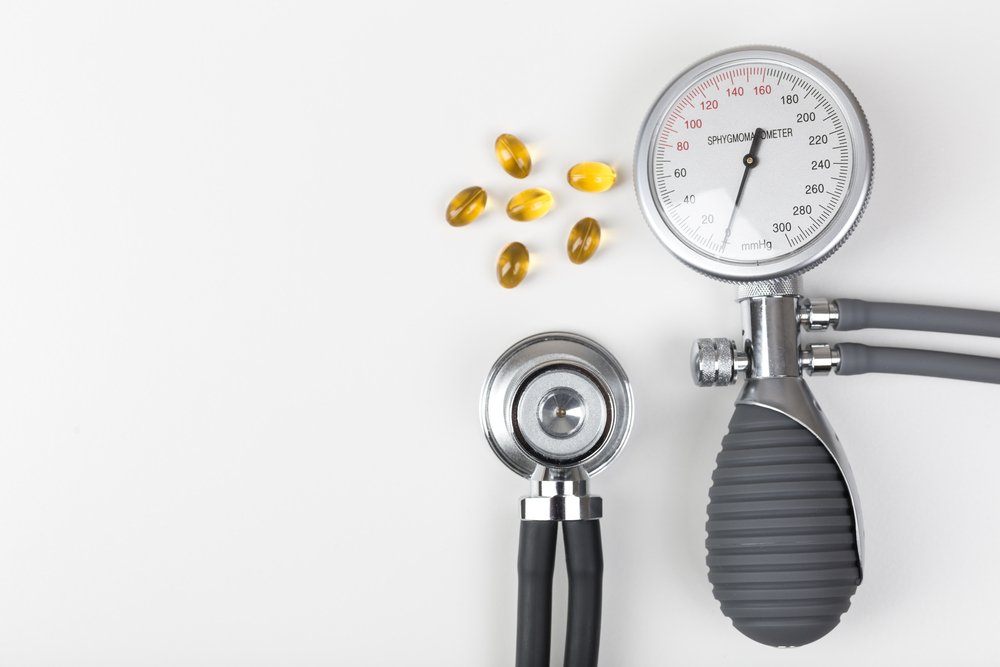 The US Food and Drug Administration (FDA) has made some bold moves in the last month regarding omega-3s by (1) – supporting health claims linking these important nutrients with a reduction in blood pressure, and (2) – updating its advice to women about the benefits of omega-3s during pregnancy and early childhood by encouraging more fish consumption.

This landmark move by FDA shows that the agency recognizes the ability of omega-3s to lower blood pressure.

In June, the agency approved a qualified health claim linking EPA and DHA omega-3s to a reduction in blood pressure. And it has been a long time in the making. The process was originally initiated by the Global Organization for EPA and DHA Omega-3s (GOED), which submitted a health claim petition almost five years ago.

And while this signifies a step in the right direction for omega-3s, the messaging that manufacturers are allowed to use on product packaging and marketing is somewhat bulky when you consider the “qualifying” language that accompanies the actual claim.

The approved claims include the following:

OmegaQuant’s Dr. Bill Harris was interviewed for a story discussing these new claims. Overall, he said he’s optimistic about the FDA’s acknowledgement of the benefits of omega-3s for maintaining healthy blood pressure.

“At least FDA is willing to acknowledge that there is something there. I think the approval of the health claims is a welcome step forward in the recognition of the multiple benefits of omega-3s,” Dr. Harris said. “It’s not just about blood lipids, like triglycerides. They affect other risk factors like blood pressure and endothelial function.”

A study published a year ago in Hypertension also showed a strong connection between the Omega-3 Index and blood pressure. So not only has it been shown numerous times that taking omega-3s can help maintain healthy blood pressure levels – based on the amount of evidence GOED submitted to FDA for he most recent qualified health claim – but now high levels of omega-3s in the blood (i.e. Omega-3 Index) of healthy adults also correlates with lower blood pressure levels.

In this study, researchers evaluated 2036 healthy young adults between the ages of 25 and 41. Anyone with cardiovascular disease, known diabetes or a body mass index (BMI) higher than 35 kg/m was excluded. The average Omega-3 Index was 4.58%. An ideal Omega-3 Index is 8% or higher.

The researchers concluded that a higher Omega-3 Index is associated with statistically significant, clinically relevant lower SBP and DBP levels in healthy young individuals, and that diets rich in omega-3 fatty acids — specifically EPA and DHA — might be a strategy for primary prevention of hypertension. These findings also support a 2014 meta-analysis by Miller et. al., which concluded that omega-3 fatty acids have blood-pressure-lowering effects.

“This is great news, especially since the American Heart Association announced in January 2018 that more than 100 million Americans have high blood pressure, putting them at risk for heart attacks and strokes. That is nearly half of all American adults!” said Dr. Bill Harris, co-inventor of the Omega-3 Index test. “The Omega-3 Index is one of the easiest risk factors to modify. All you have to do is consume more omega-3s from the right sources, such as fatty fish like salmon or omega-3 supplements that contain EPA and DHA.”

Speaking of omega-3 fish, FDA recently put some additional muscle into its recommendations for omega-3s and pregnancy. Getting these important nutrients during pregnancy and throughout early childhood has been shown to have significant benefits on cognitive development, as well as reducing preterm birth and postpartum depression risk in pregnant women.

On July 2nd, FDA, along with the U.S. Environmental Protection Agency (EPA) issued revised “Advice about Eating Fish for Women Who Are or Might Become Pregnant, Breastfeeding Mothers, and Young Children.” This updates previous advice the two agencies issued in January 2017.

The agencies said while it is important to limit mercury in the diets of women who are pregnant or breastfeeding and young children, many types of fish are both nutritious and lower in mercury.

The revised advice highlights the various nutritional components in fish, many of which have important roles in growth and development during pregnancy and early childhood, especially the omega-3s EPA and DHA. It also highlights the potential health benefits of eating fish as part of a healthy eating pattern, particularly for heart health and lowering the risk of obesity.

This advice is intended to help women who are or might become pregnant, breastfeeding mothers, and parents of children over 2 years of age make informed choices about fish that are nutritious and safe to eat.

While the advice categorizing fish based on their mercury levels has not changed, the revised document further promotes the science-based recommendations of the Dietary Guidelines for Americans on the importance of fish in healthy eating patterns. It retains the easy-to-use reference chart that sorts more than 60 types of fish into three categories, based on their levels of mercury:

“The 2015-2020 Dietary Guidelines for Americans provides advice for people in the U.S. 2 years of age and older and recommends that adults eat at least 8 ounces of seafood (less for young children) per week based on a 2,000 calorie diet. Eating fish when pregnant or breastfeeding can also provide health benefits,” the two agencies said. For this reason, the agencies say, the Dietary Guidelines for Americans recommends that women who are pregnant or breastfeeding eat 2 to 3 servings (8 to 12 ounces) of lower-mercury fish per week.

Unfortunately, fish consumption in the U.S., including among women who are pregnant or breastfeeding, is far less than the amounts recommended. In fact, data have shown that more than 20% of women who were pregnant reported eating no fish in the previous month; for those who did report eating fish, half ate less than two ounces per week.”

Other studies have found similar trends regarding underconsumption of fish among pregnant and breastfeeding women. Research shows that getting 2-3 servings of fatty fish per week is the approximate amount that should deliver enough of a protective level of DHA omega-3 for pregnancy. But if fish is not on the menu for whatever reason, taking a DHA supplement is a great alternative.

While it is recommended that women get at least 200 mg DHA omega-3 for pregnancy per day, most women only manage to get about 60 mg and less than 10% take a DHA supplement.

The DHA level a pregnant woman should strive for is at least 5% (i.e., 5% of her red blood cell fatty acids are DHA), which is achievable by following the recommendations of experts, such as eating 2-3 servings of fish per day or taking a supplement that delivers at least 200 mg DHA. If a woman falls below 5%, she can easily increase her DHA level by eating more fatty fish like salmon or taking an omega-3 supplement that contains at least 200 mg of DHA omega-3 for pregnancy.

In a study published in December 2018, it was estimated that more than 70% of women of childbearing age in the US are below the 5% DHA cutoff. DHA levels in pregnant women of 4.3% are described in the research as “very low,” with 3.5% defined as “exceedingly deficient.”

DHA omega-3 in the diets of pregnant and breastfeeding women can easily and safely be tested using either a Prenatal DHA Test or Mother’s Milk DHA Test. These tests can help guide intake of this important nutrient before, during and after pregnancy. Talk to your doctor about how to get more DHA omega-3 for pregnancy and make sure you monitor your level to make sure that your intake is sufficient. Getting enough DHA omega-3 for pregnancy is one of the best things you can do for yourself and your baby.

BLOG: 5 Ways Pregnant Women Can Get More DHA in Their Diets 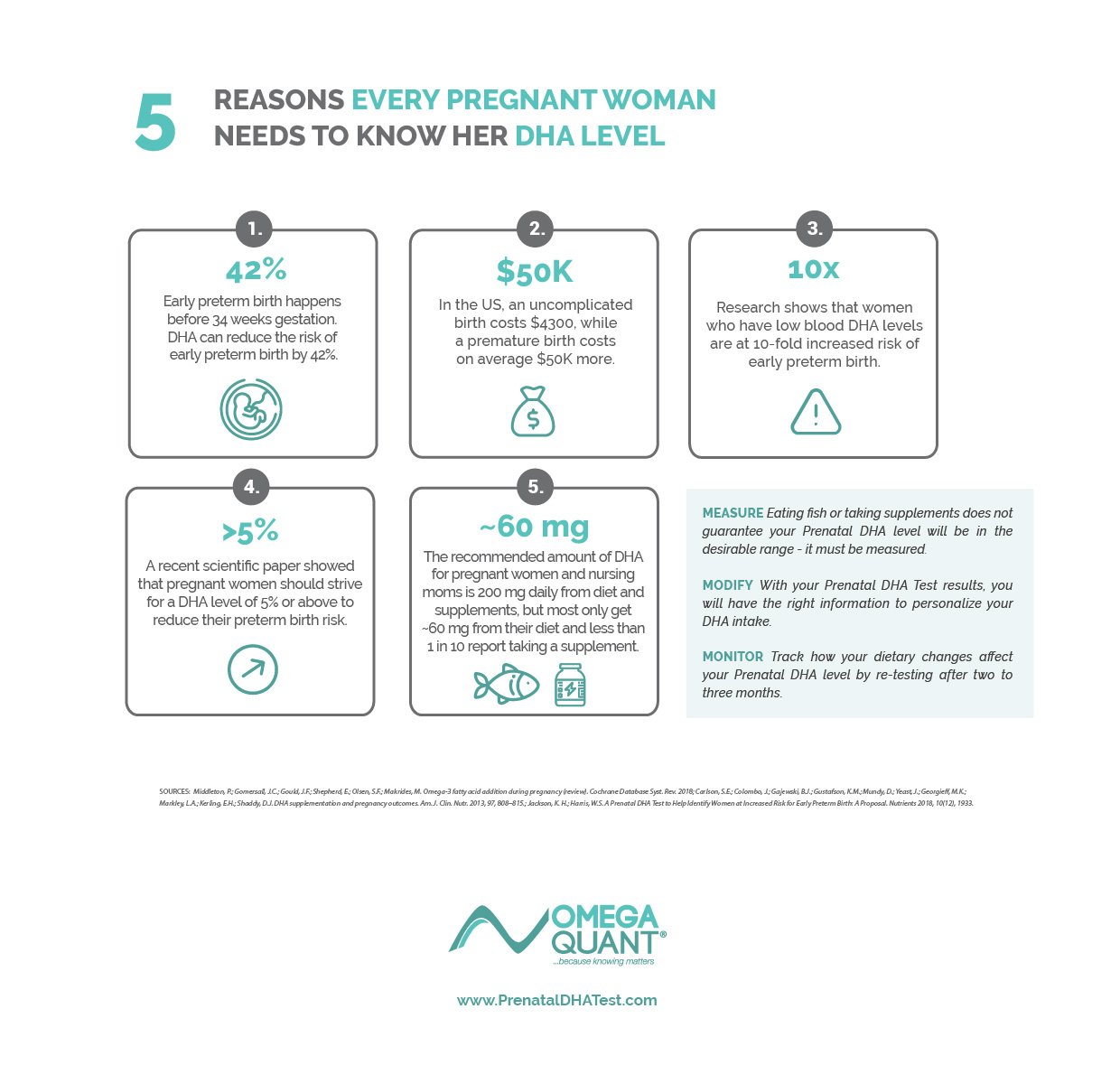