How is the Omega-3 Index Connected to Depression? 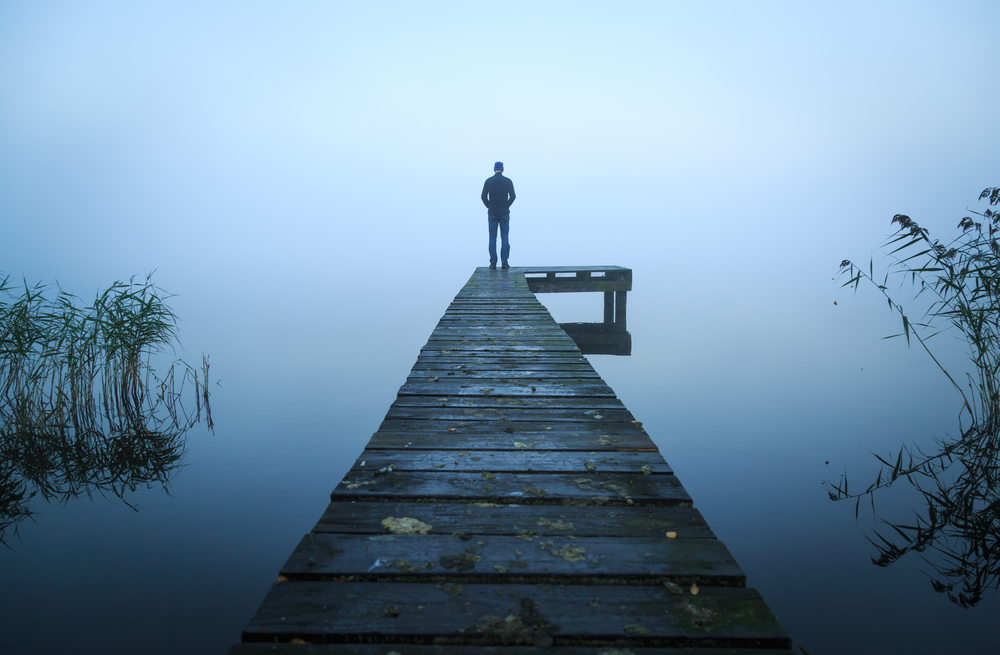 In this week’s blog, we are going to provide one of the most comprehensive roundups of how omega-3 levels (i.e. Omega-3 Index) in the blood (and brain!) relate to the insidious mental health disorder of depression. Small or large, all of the studies we are going to discuss showed a direct correlation between depression and omega-3 status.

As we begin to look at the relationship between the Omega-3 Index (or other omega-3 blood markers) and depression, there are three particular studies — PLEFA, 2018; Ann Nutr Metab, 2012; and Psychosom Med, 2008) — comparing the Omega-3 Index in patients with and without depression where researchers consistently found that the level was always lower in those with the disease.

These studies compared people with and without depression in a given area, or in this case a particular country: Korea, Germany and the United States. Cases are people who are depressed and controls are those who are not. Researchers in each study compared the Omega-3 Indexes of each group. In each country, you can see that the Omega-3 Index is lower in those who have depression compared to the controls, and to a degree that is statistically significant across the board:

You can also see the wide span of “normal” omega-3 levels around the world, from about 3% in cardiac patients in the US, to 5% in Germany, to over 9% in Korea.

In a study published in Psychosomatic Medicine in 2008, researchers looked at depressive symptoms in heart patients. They measured the Omega-3 Index in 759 patients admitted to the hospital with an acute myocardial infarction (MI) or what is also called acute coronary syndrome.

Researchers took Patient Health Questionnaire scores to find potential predictors of depression risk. For example, if you were a smoker, or had diabetes or hypertension, you were more likely to have symptoms of depression. On the other hand, being male and Caucasian was associated with a lower risk of depression. Age was also related to lower risk. For every 10 years of age there was a drop in the chance of having depression, interestingly. BMI and college education were not significantly linked with risk for being depressed.

They also found that a higher Omega-3 Index level was significantly associated with lower depression risk. In fact, there was a 1-point improvement in the Patient Health Questionnaire score for each 4.5% rise in EPA/DHA. So, even taking all these other factors into account, the Omega-3 Index was still a predictor in that study.

BLOG: People with More of These Nutrients in Their Blood Tend to Live Longer, Healthier Lives

Moving on to a study published in the Journal of Clinical Psychiatry in 2013, researchers looked at EPA and DHA levels in depressed patients with or without anxiety compared to healthy controls. There were 18 people who had major depression and anxiety, another group of 41 people who had major depression but no anxiety, and then there were 62 controls.

Researchers estimated the Omega-3 Index from the plasma concentration data. And they found no difference between the first two groups, but those who had depression and anxiety did have a lower Omega-3 Index, so there is a possible connection here between anxiety and omega-3.

A review article by Erik Messamore and Bob McNamara, who is at the University of Cincinnati and very active in this area, published a 2016 study that looked at the Omega-3 Index in 131 psychiatric inpatients compared with the norms in the general U.S. population. They didn’t do any controls in the hospital, they just compared them to norms from OmegaQuant.

They found that 75% of the patients had an Omega-3 Index in the deficient zone, so under 4%, compared with only about 25% of the general population who were in this deficient zone. So, three times as many psych patients were very low in omega-3. 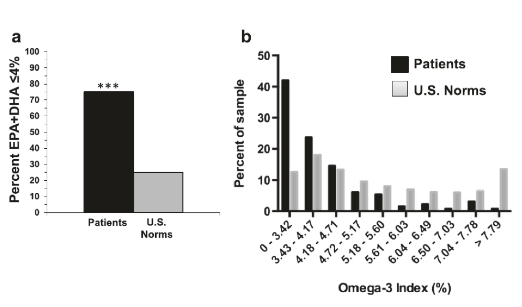 On the right is a more detailed look adding in the Omega-3 Index scale along the bottom, going from a really low to high Omega-3 Index. You can see that the patients, that’s the black bars, tend to concentrate on the lower end, whereas the general American norms are more spread out across the whole range, so there’s clearly a shift toward a lower Omega-3 Index in individuals who were hospitalized for psychiatric issues.

Now let’s look at a meta-analysis about depression in the perinatal period, during pregnancy and immediately after birth. One study, published in Biological Psychiatry in 2017, included 14 different studies comparing circulating omega-3 levels in perinatal women with and without depression.

VIDEO: What is the Relationship Between Mom’s Omega-3 Levels During Pregnancy & Postpartum Depression?

In another study published in 2017, researchers looked at the risk for postpartum depression as a function of the Omega-3 Index measured at about week 28 of pregnancy. Specifically, they charted depression scores three months after birth against the Omega-3 Index at week 28. In other words, they compared omega-3 blood levels during pregnancy to the mom’s predilection for postpartum depression.

Women who had the higher Omega-3 Indexes were at lower risk for having depression at the end of that three-month period and women with the lowest omega-3 levels were at a higher risk for being depressed. Again, a good connection between high omega-3 and low risk for depression.

Depression is certainly related to suicide and risk for suicide. A 2004 study conducted in China compared 100 individuals who were admitted to a hospital for attempted suicide and 100 matched controls who were admitted for accidents. Researchers adjusted for variables such as age, gender, only child, physical disability, family history of attempted suicide, marital status, formal schooling, occupation, monthly per head income in family, residence, and smoking status.

They also measured the omega-3 levels and looked at the odds of being a case, meaning a suicide attempter, or a control, and they found that if you look at the Omega-3 Index quartiles, those individuals who were up in the top quartile were about 80% less likely to be a case than people who were in the first quartile. So that’s a significant trend for the Omega-3 Index as a function of lower risk for attempted suicide, which itself is clearly related to lower depression.

Moving to the US, a 2016 study published in the Journal of Clinical Psychiatry looked at suicide risk among male soldiers in the U.S. military. Researchers accessed a blood bank and measured the plasma omega-3 level for 800 suicide victims. We don’t know the time that the blood was drawn relative to their suicide attempt, but the levels were compared to 800 controls. Researchers estimated that the highest DHA level was related to around a 6% Omega-3 Index and the lowest to around 2.7%, which is really quite low.

What is interesting is there’s a step function here. Only those with the very highest DHA levels were at lower risk for attempting suicide. Anyone with a level below 6% were more likely to be attempting or to have committed suicide. In fact, there was a one-and-a-half to twofold higher risk for anyone with less than the highest omega-3 levels, which translates to a suicide risk being 50-80% greater compared to those at the highest omega-3 levels.

DHA levels are not only lower in the blood, but also in the brains of depressed victims of suicide. A 2013 study by McNamara and colleagues were able to measure the brain levels of DHA in 20 suicide victims who had major depressive disorder. They also measured 20 controls, 8 of which had known cardiovascular disease and 12 who did not.

We will continue to spotlight a variety of connections between the Omega-3 Index brain-related health issues during the coming weeks. This will include a deeper look at anxiety and other mental issues like bipolar disorder, as well as cognitive function and memory.

It is important to remember that the science on omega-3s, the Omega-3 Index, and depression continues to evolve. No one study or a combination is the final word on how these nutrients impact risk. The Omega-3 Index is specifically a tool that can help establish nutritional status of omega-3s EPA and DHA.

*Expires at midnight on December 2nd. Offer applies to online orders only.