How Omega-3s Might Help Break the Vicious Cycle of Anxiety 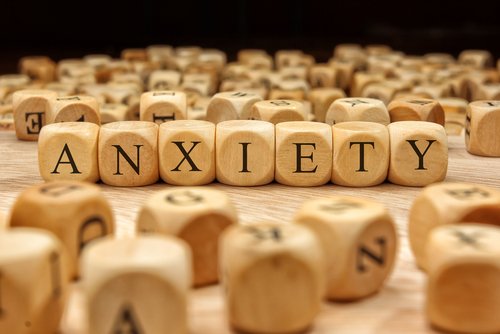 For many people, especially parents and kids, this is a high-anxiety time of year. Between fall sports, starting school, work and social commitments, everyone seems to feel like there just aren’t enough hours in the day. This would probably fall into the category of occasional anxiety, but there are other kinds of anxiety that can be literally and figuratively paralyzing.

HERE’S HOW SOME PEOPLE DESCRIBE THE FEELING OF ANXIETY

According to the National Institute of Mental Health (NIMH), “Occasional anxiety is an expected part of life. You might feel anxious when faced with a problem at work, before taking a test, or before making an important decision. But anxiety disorders involve more than temporary worry or fear. For a person with an anxiety disorder, the anxiety does not go away and can get worse over time. The symptoms can interfere with daily activities such as job performance, school work, and relationships.”

NIMH says researchers are finding that both genetic and environmental factors contribute to the risk of developing an anxiety disorder.

Anxiety disorders are typically categorized as the following:

So what does it feel like to be in a state of anxiety? The short answer is terrible, with a long list of symptoms depending on which type of anxiety disorder you have:

For a Phobia Disorder:

The bad news is anxiety is not a condition that discriminates. It affects the young and old, rich and poor. The good news is there are several helpful treatment options out there, such as psychotherapy, medication, meditation, support groups, and perhaps a combination of these.

More recently, various nutritional ingredients are being studied for their role in ameliorating anxiety. And omega-3s EPA and DHA are an important part of this list. Part of the interest in nutrients like EPA and DHA is their documented safety, which contrasts with a long list of potential side effects associated with anti-anxiety drugs, such as drowsiness, weight gain, insomnia and dizziness.

BLOG: HOW CAN OMEGA-3S HELP DEPRESSION?

In 2011, researchers evaluated anxiety levels in 68 medical students in one of the first studies to show that omega-3s EPA and DHA might help reduce anxiety.

The study participants provided serial blood samples during lower-stress periods as well as on days before an exam. The students also received either 2.5 grams per day of omega-3s (2085 mg EPA and 348 mg DHA) or placebo capsules that mirrored the proportions of fatty acids in the typical American diet.

Compared to controls, those students who received omega-3 supplementation showed a 20% reduction in anxiety symptoms. For these researchers, the data suggest that omega-3s can reduce inflammation and anxiety even among healthy young adults.

The researchers also said this was the first evidence to show that omega-3s could have potential anxiolytic (i.e., anti-anxiety) benefits.

Fast forward to 2018 and a new meta-analysis published in JAMA adds another layer of support to the role of omega-3s in reducing anxiety.

This report tapped data from 19 clinical trials, which included 2240 participants (1203 treated with omega-3 PUFAs and 1037 without) from 11 countries. Participants had a wide range of psychiatric and physical conditions, including borderline personality disorder, depression, obsessive-compulsive disorder, Alzheimer’s disease, test anxiety, acute myocardial infarction, and premenstrual syndrome. Others were from the general population and had no specific clinical conditions.

Researchers also discovered daily dosages higher than 2000 mg were linked with a significantly higher anxiolytic effect, compared with lower dosages. In addition, supplements with less than 60% eicosapentaenoic acid (EPA) were significantly associated with reduced anxiety symptoms, but supplements with 60% or more EPA were not.

“This review indicates that omega-3s might help to reduce the symptoms of clinical anxiety. Further well-designed studies are needed in populations in whom anxiety is the main symptom,” the researchers concluded.

One of the other major limitations in this study was the small sample size, however, researchers are confident they are onto something here. The next round of studies, they said, should focus on finding the most appropriate dose.

INFOGRAPHIC: HOW COMMON IS ANXIETY? 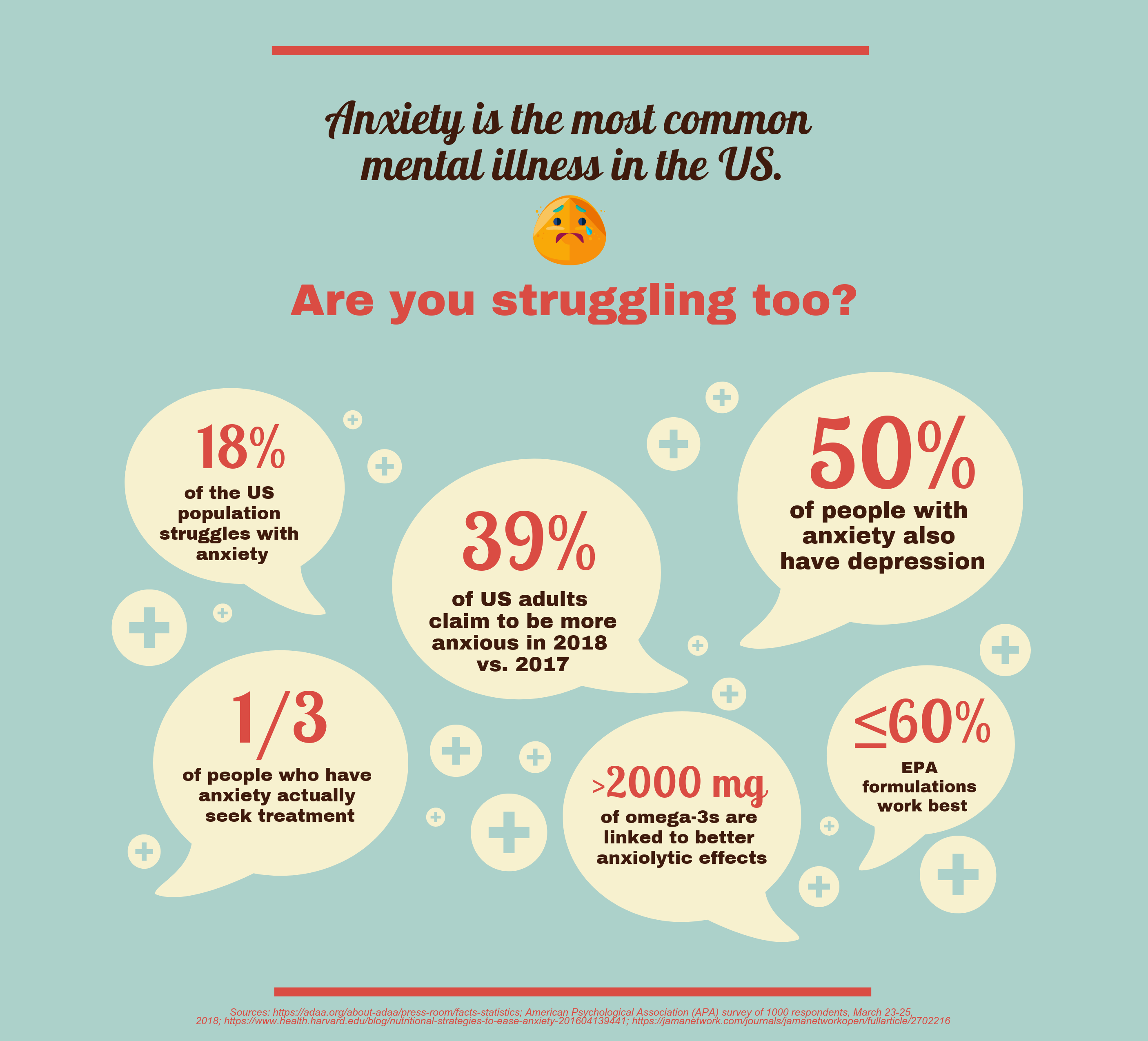 Anxiety is the most common form of mental illness. Nutritional solutions in the form of omega-3s can go a long way toward reducing anxiety.

Nutritional Psychiatry: The Wave of the Future?

Most consumers are both buzzed and exhausted, playing host to a busy brain that has trouble shutting down, and even when it does, it takes a large shot of caffeine to get it going again.

The world of natural products is hoping to offer, at least in part, some relief to those who can’t shake anxiety when backing down from tiresome schedules just isn’t an option.

According to Nutrition Business Journal, these products fall under the realm of nutritional psychiatry, a relatively new and growing field that looks at clean diets and supplements for mental health. In this vein, NBJsays, “Today’s hot supplements include up-and-comers ashwagandha, sceletium, cannabidiol (CBD), prebiotics and probiotics, and good old magnesium and omega-3s.”

The reason why this particular area seems to be flourishing is because most current treatments, as one study points out, “…avert less than half of the disease burden, suggesting that additional strategies are needed to prevent and treat mental disorders.”

Furthermore, according to an article on The Conversation, “A lack of essential nutrients is known to contribute to the onset of poor mental health in people suffering from anxiety and depression, bipolar disorder, schizophrenia and ADHD. The emerging scientific evidence suggests that there should be a bigger role for nutritional psychiatry in mental health within conventional health services. If the burden of mental ill health is to be reduced, GPs and psychiatrists need to be aware of the connection between food, inflammation and mental illness.”