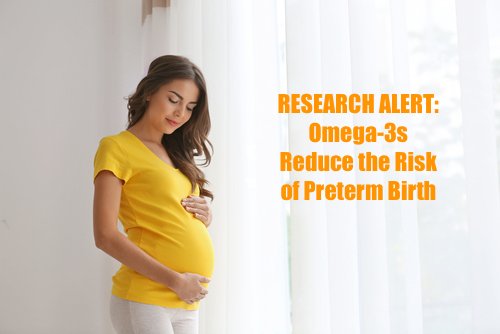 Two months ago we wrote a blog about omega-3s (EPA/DHA) and preterm births. And now, some experts say, a new meta-analysis of 70 clinical trials on omega-3s and pregnancy could be the final word on reducing preterm birth.

The 70 randomized controlled trials (RCTs) analyzed in an updated Cochrane Review involved nearly 20,000 women and asked the same question as the original review, which was published in 2006: Does taking long-chain omega-3s during pregnancy from supplements or food improve pregnancy outcomes and other health outcomes of the babies and their mothers?

But the best part is that omega-3s carry an excellent safety profile. So this is a win-win for pregnant women who previously might have been concerned about trying to get their omega-3s from fish or supplements.

“Supplementation during pregnancy is a simple and effective way to reduce preterm, early preterm birth and low birthweight, with low cost and little indication of harm,” the researchers said, adding that, “More studies comparing omega-3 LCPUFA and placebo are not needed at this stage.”

As Kristina Harris Jackson, PhD, research associate at OmegaQuant, points out, most of the studies (50) analyzed in this review were purely omega-3/DHA supplementation studies, with 7 studies using supplements and dietary advice, 3 just giving dietary advice, and 12 providing omega-3 + other supplements. So when you consider this, she said, “There is an argument for the biological activity of omega-3s/DHA rather than the whole fish.”

WATCH A FACEBOOK LIVE BROADCAST ABOUT THIS STUDY WITH DR. KRISTINA JACKSON

The leading cause of death for children under 5 is premature birth, accounting for nearly one million deaths annually. In addition, premature birth is associated with a higher risk of health and developmental issues, including visual impairment, developmental delay and learning difficulties. The infographic below has even more statistics around preterm births. 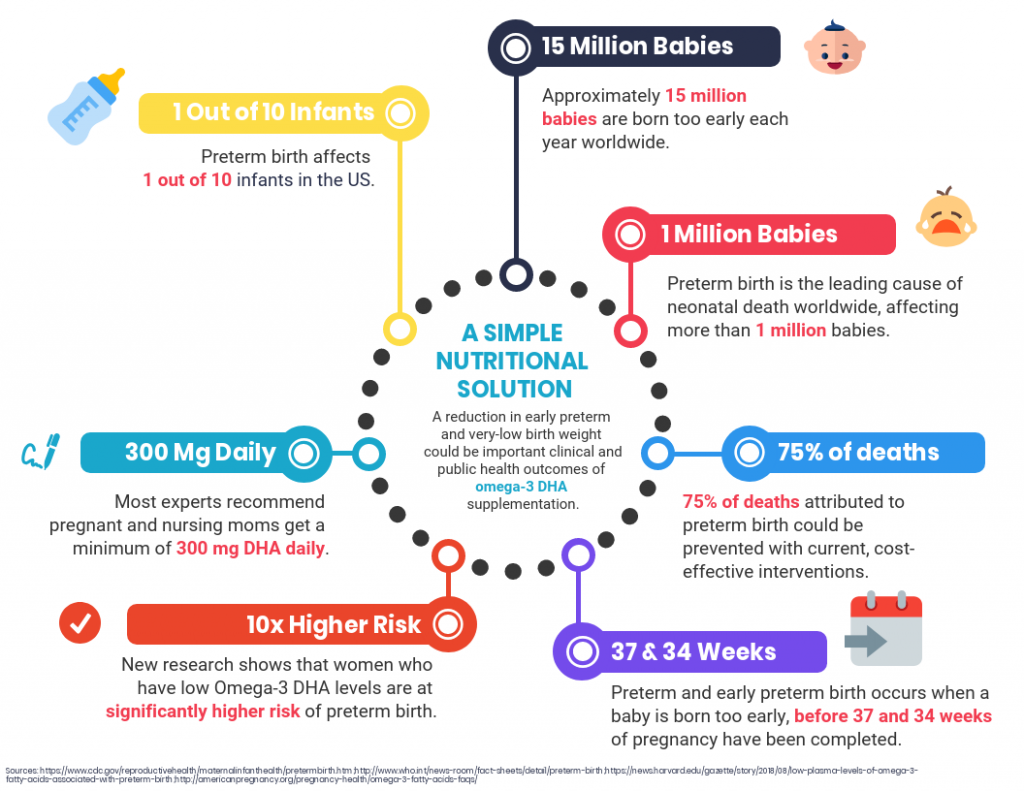 “We know premature birth is a critical global health issue, with an estimated 15 million babies born too early each year,” explained associate professor Philippa Middleton from Cochrane Pregnancy and Childbirth and the South Australian Health and Medical Research Institute (SAHMRI). “While the length of most pregnancies is between 38 and 42 weeks, premature babies are those born before the 37-week mark – and the earlier a baby is born, the greater the risk of death or poor health.”

Associate professor Middleton and a team of Cochrane researchers have been looking closely at long-chain omega-3 fats and their role in reducing the risk of premature births – particularly docosahexaenoic acid (DHA) and eicosapentaenoic acid (EPA) found in fatty fish and fish oil supplements.

In their analysis of 70 RCTs they found that for pregnant women, increasing the daily intake of long-chain omega-3s:

“There are not many options for preventing premature birth, so these new findings are very important for pregnant women, babies and the health professionals who care for them,” associate professor Middleton says. “We don’t yet fully understand the causes of premature labor, so predicting and preventing early birth has always been a challenge. This is one of the reasons omega-3 supplementation in pregnancy is of such great interest to researchers around the world.”

One issue is pregnant women do not eat fish very often. So researchers believe encouraging pregnant women to eat fatty fish (that generally have low toxin levels) or to use omega-3 supplements may improve children’s and women’s health.

“We need to fill the gap,” Dr. Harris Jackson said. “This meta-analysis doesn’t land on a clear recommendation on dosage, but rather maintains that everyone should be taking at least 200 mg per day.”

The Cochrane Review found the optimum dose was a daily supplement containing between 500 and 1000 milligrams (mg) of long-chain omega-3 fats (containing at least 500 mg of DHA) starting at 12 weeks of pregnancy.”

Currently, Dr. Harris Jackson said studies like ORIP and ADORE are testing higher dosages (800-1000 mg DHA per day, respectively) and the recommendations may change after these results are reported.

“A universal strategy of supplementation may be reasonable, although ideally, with more knowledge, this would be targeted to women who would benefit the most,” Dr. Harris Jackson said.

Who are the women who would benefit the most? This isn’t clear yet, according to Dr. Harris Jackson, but likely those with low DHA blood levels.

Benefits that Are Still in Question

The trials included in the meta-analysis were mostly undertaken in upper-middle or high-income countries. And some studies included women at increased risk of preterm birth. Researchers say the quality of the evidence from the included studies ranged from high to very low, which likely affected the certainty of the findings for different outcomes like maternal mental health and child cognitive benefits.

Future studies could consider if and how outcomes may vary in different populations of women, and could test different ways of increasing omega-3 LCPUFA during pregnancy.

“Further follow-up of completed trials is needed to assess longer-term outcomes for mother and child, to improve understanding of metabolic, growth and neurodevelopment pathways in particular, and to establish if, and how, outcomes vary by different types of omega-3 LCPUFA, timing and doses; or by characteristics of women,” the Cochrane researchers said.