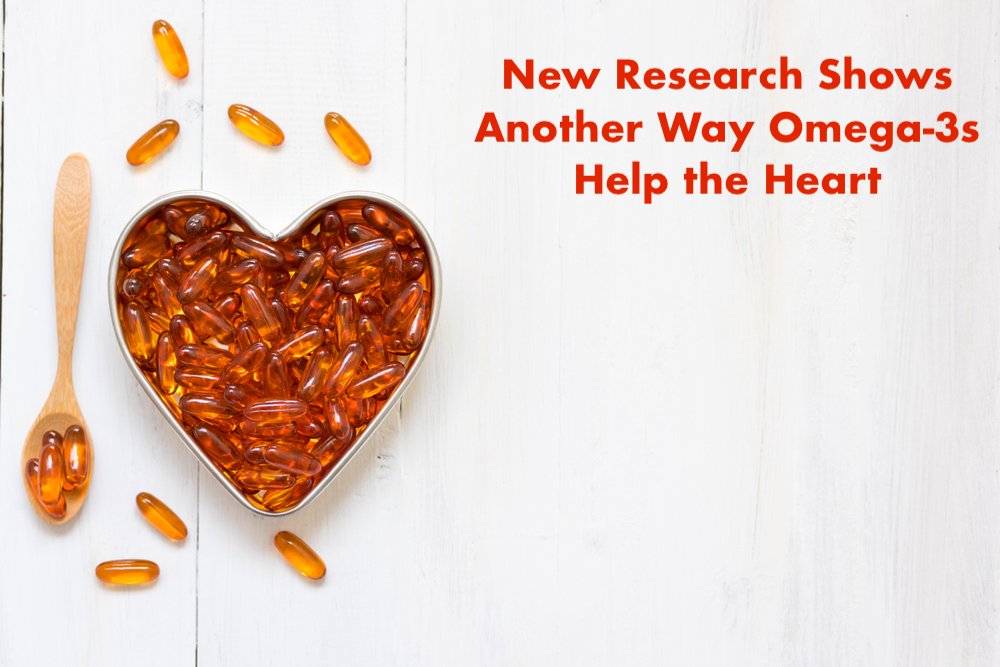 Chances are you know someone who has a heart issue, whether they have high cholesterol, high blood pressure, or have developed more advanced forms of disease like atherosclerosis —also called “hardening of the arteries.”

Many people have also heard about omega-3s and how they are linked to heart health. Well, new research provides more information on how omega-3s help the heart. More specifically, how omega-3s help keep the arteries healthy and flexible.

The arteries are extremely important to the human body. Keeping them clear and healthy is the best way to maintain heart and brain health. When they become diseased and damaged, atherosclerosis can set in and lead to catastrophic events and even death.

According to the National Heart, Lung & Blood Institute (NHLBI), atherosclerosis is a progressive disease of the arteries, which can ultimately lead to heart attack, stroke and death. Atherosclerosis is also the leading cause of heart disease.

As you age, the arteries, which carry oxygen and nutrients throughout the blood, can become stiff or hardened with plaque that has formed on its walls. When this happens, the arteries narrow and restrict blood flow, which can impact the way the blood travels throughout the rest of the body, especially to the heart and brain.

Plaque is made up of fat, cholesterol, calcium, and other substances found in the blood. When plaque ruptures it can cause a life-threatening blood clot that can lead to a heart attack or stroke.

So what’s the connection between omega-3 and heart health? As far as specific benefits, in doses of 3-4 grams per day, EPA and DHA have been shown to lower blood triglyceride levels and blood pressure. They also stabilize the heart’s electrical system and quiet down the body’s inflammatory response, allowing it to come back to normal after an initial inflammatory insult more quickly.

Further, omega-3s reduce the chances of inappropriate blood clots forming and make the blood vessels less stiff and more flexible, which facilitates normal blood flow to the tissues and organs.

How Do I Know if I have It?

Some of the well-known risk factors for atherosclerosis include unhealthy cholesterol levels, high blood pressure, insulin resistance, diabetes, obesity, older age and family history of early heart disease. In terms of the latter, although age and family history certainly play a role in the development of atherosclerosis, it doesn’t automatically mean you’ll wind up getting it too. Controlling other risk factors will help lessen genetic influences on the potential development of the disease.

NHLBI says inflammation is the body’s response to injury or infection and that damage to the arteries’ inner walls seems to trigger inflammation and help plaque grow.

High levels of triglycerides in the blood also may raise the risk for atherosclerosis, especially in women. Triglycerides are a type of fat.

Another risk factor that is relatively new onto the heart disease scene is the Omega-3 Index. In a 2008 paper published in the American Journal of Clinical Nutrition, the inventor of the Omega-3 Index, Dr. Bill Harris wrote: “Because blood concentrations of omega-3 fatty acids, particularly eicosapentaenoic acid (EPA) and docosahexaenoic acid (DHA) are a strong reflection of dietary intake, it is proposed that an omega-3 biomarker (i.e., the omega-3 index – erythrocyte EPA + DHA) be considered as a potential risk factor for coronary heart disease mortality, especially sudden cardiac death.”

He went on to say that the omega-3 index fulfills many of the requirements for a risk factor including consistent epidemiologic evidence, a plausible mechanism of action, a reproducible assay, independence from classic risk factors, modifiability, and, most important, the demonstration that raising levels will reduce risk for cardiac events.

Dr. Harris suggested in this paper that measuring membrane concentrations of omega-3s is a rational approach to biostatus assessment as these fatty acids appear to exert their beneficial metabolic effects because of their actions in membranes.

More specifically, he said, they alter membrane physical characteristics and the activity of membrane-bound proteins, and, once released by intracellular phospholipases from membrane stores, they can interact with ion channels, be converted into a wide variety of bioactive eicosanoids, and serve as ligands for several nuclear transcription factors, thereby altering gene expression.

VIDEO: Omega-3s Benefit the Heart and So Much More

The good news is the Omega-3 Index has been available for almost a decade now. It represents a simple, safe and convenient way for people to assess their omega-3 EPA and DHA status and take action to improve these levels if they are low.

According to Japanese researchers, few studies have examined the association between omega-3s and measures of atherosclerosis in the general population. A new study published in Nutrition, Metabolism & Cardiovascular Diseases, examined the relationship of omega-3s with aortic calcification.

EBCT is a method of measuring calcium deposits in the arteries using a form of CT scanning. The Agatston score is a semi-automated tool used to calculate a score based on the extent of coronary artery calcification detected by an unenhanced low-dose CT scan, which is routinely performed in patients undergoing cardiac CT.

This study showed that there is a significant inverse association of omega-3s EPA and DHA with aortic calcification independent of conventional cardiovascular risk factors among men in the general population, an association that appeared to be driven by DHA but not EPA.