New Study a Bummer for Depression and Omega-3s, and Here’s Why… 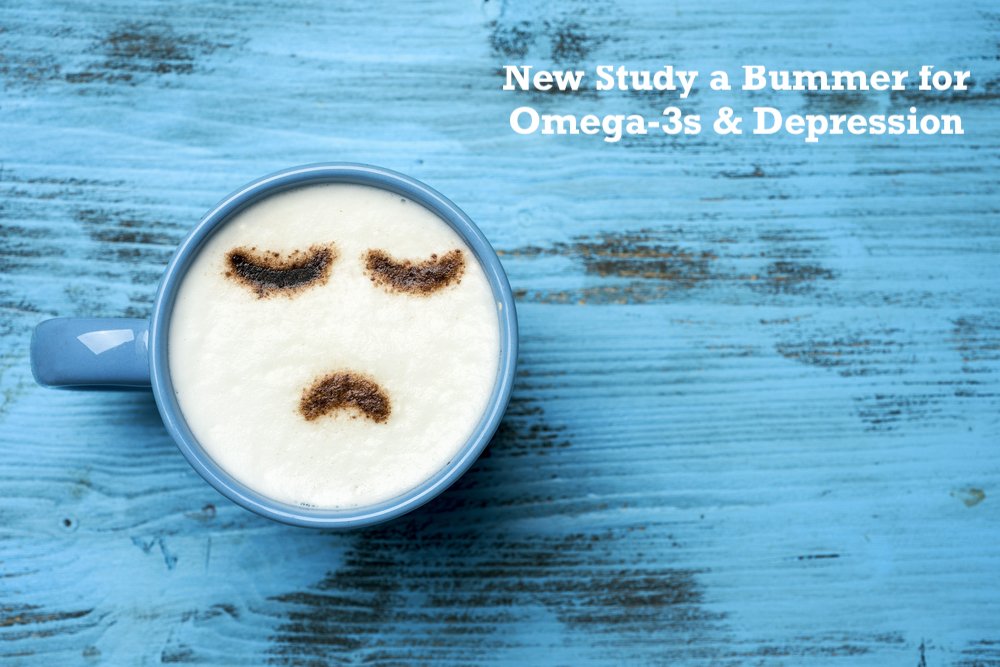 In June, a study published in the Journal of Clinical Psychiatry showed that there was no added benefit when researchers paired omega-3s EPA and DHA with the anti-depressant sertraline (i.e., Zoloft). Experts believe there are many reasons omega-3s didn’t rise to the occasion and this blog will discuss some of them.

Depression: One of the Most Complex Diseases

Depression is one of the most complex illnesses to treat, so there is great interest in trying to figure out what types of solutions will have long-lasting benefits. Omega-3s are of particular interest in this area because they are found in the brain and studies have shown they interact with certain mood-regulating neurotransmitters like serotonin. Their anti-inflammatory benefits are also likely to play a role.

Unfortunately, depression is the leading cause of disability worldwide, and although there are many treatment options, only about one third of patients treated with conventional antidepressants experience a positive response.

Maybe it’s because there are several forms of depression, so finding treatment is basically an exercise in trial and error. The same seems to be true of clinical studies investigating depression.

To clarify the type of depression you have, the Mayo Clinic says your doctor may add one or more “specifiers.” A specifier means that you have depression with specific features, such as:

The Role of Omega-3s in Depression

According to the Harvard Health Blog, there are more than 30 clinical trials that have tested different omega-3 preparations in people with depression. “Most studies have used omega-3s as add-on therapy for people who are taking prescription antidepressants with limited or no benefit,” the author wrote. “Fewer studies have examined omega-3 therapy alone.

The author went on to say that clinical trials typically use EPA alone or a combination of EPA plus DHA, at doses from 0.5 to 1 gram per day to 6 to 10 grams per day. To give some perspective, he said, 1 gram per day would correspond to eating three salmon meals per week.

The pursuit for omega-3s as a depression solution is fueled by the fact that the disease appears less common in nations where people eat large amounts of fish. This suggests that these nutrients could possibly then be deficient in those showing signs of depression.

Research published last August in the Journal of the American College of Cardiology’s Heart Failure found significant correlations between blood levels of EPA plus DHA omega-3s (i.e., Omega-3 Index) in “cognitive” (as opposed to “somatic”) depression among heart failure subjects. (Cognitive depression would include symptoms like sadness and pessimism, whereas somatic would include manifestations such as fatigue and sleep disturbances.)

BLOG: How Can Omega-3s Help Depression?

Offering some context on this study, Dr. Bill Harris, one of the study’s authors and the co-inventor of the Omega-3 Index test, said, “This was a study in already depressed individuals, which meant the researchers are looking to high-dose (although it could have been higher) omega-3 supplements to improve depressive symptoms, like a drug,” he said.

The authors were also exploring a few different supplement options, focusing on recent evidence that EPA might be more effective for treating depression while DHA may be better for general cognition. “From this study, it’s not clear to me that one supplement type was better than the other,” Dr. Harris said, adding, “However, linking higher blood levels of omega-3s to improved depression symptoms in people with both depression and heart failure is encouraging and hopefully leads to better treatment for their conditions.”

In late 2018 meta-analysis published in JAMA adds another layer of support to the role of omega-3s in reducing anxiety, a condition that frequently accompanies depression.

This report tapped data from 19 clinical trials, which included 2240 participants (1203 treated with omega-3 PUFAs and 1037 without) from 11 countries. Participants had a wide range of psychiatric and physical conditions, including borderline personality disorder, depression, obsessive-compulsive disorder, Alzheimer’s disease, test anxiety, acute myocardial infarction, and premenstrual syndrome. Others were from the general population and had no specific clinical conditions.

Researchers also discovered daily dosages higher than 2000 mg were linked with a significantly higher anxiolytic effect, compared with lower dosages. In addition, supplements with less than 60% eicosapentaenoic acid (EPA) were significantly associated with reduced anxiety symptoms, but supplements with 60% or more EPA were not.

“This review indicates that omega-3s might help to reduce the symptoms of clinical anxiety. Further well-designed studies are needed in populations in whom anxiety is the main symptom,” the researchers concluded.

INFOGRAPHIC: How Common is Anxiety?

Studies of depressed psychiatric patients have suggested that antidepressant efficacy can be increased by adding EPA, so researchers were determined to find out if the addition of EPA could improve the response to sertraline in depressed patients with or at high risk for coronary heart disease (CHD).

Between May 2014 and June 2018, 144 patients with DSM-5 major depressive disorder seen at the Washington University School of Medicine with or at high risk for CHD were randomized to receive either 50 mg/d of sertraline and 2 g/d of EPA or 50 mg/d of sertraline and corn oil placebo capsules for 10 weeks. The Beck Depression Inventory II (BDI-II) was the primary outcome measure.

After 10 weeks, there were no differences between the groups, leading researchers to conclude: “Augmentation of sertraline with 2 g/d of EPA for 10 weeks did not result in greater improvement in depressive symptoms compared to sertraline and corn oil placebo in patients with major depressive disorder and CHD or CHD risk factors. Identifying the characteristics of cardiac patients whose depression may benefit from omega-3 and clarifying the pathways linking omega-3 to improvement in depression symptoms are important directions for future research.”

BLOG: What the Headlines DON’T Tell You About the Latest Omega-3 Trial