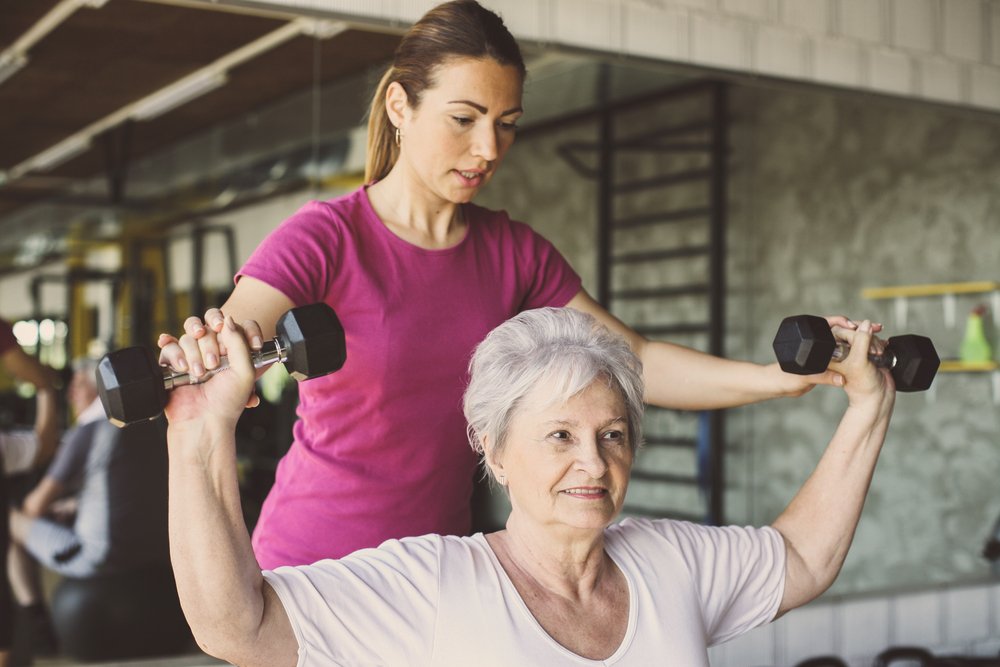 Aging looks different for everyone. As research on aging grows, more and more people are beginning to understand that how gracefully (or ungracefully) we age has a lot to do with our lifestyle choices.

It used to be considered “normal” to experience a significant decline in physical ability as we grow old. In the past, many gave up the idea of going up and down a set of stairs, picking things up off the floor when they fall, or living independently later in life. More recently, though, it’s becoming more widely accepted that aging does not have to look that way for everyone.

If you have read anything about The Blue Zones, you know that there are people in this world who live a high quality of life, both cognitively and functionally, well past the age of 100 years old. While many articles out there discuss preserving cognition as we age, this article will discuss the preservation of physical function. Let’s dig into a common (but not inevitable) feature in the aging process that predisposes elderly individuals to disability, immobility, falls, fractures, and death: the age-related loss of muscle mass and muscle strength known as sarcopenia.

The word sarcopenia is of Greek origin, where sarx means flesh, and penia means loss. While the age-related loss of physical function had been studied since the 1970s, it wasn’t until 1988 that this term was coined and it wasn’t until 2016 that sarcopenia was identified as a true disease. Sarcopenia has been defined by the European Working Group on Sarcopenia in Older People as a progressive and general loss of muscle mass and muscle function with advancing age. Even though some loss of both is a natural part of the aging process, sarcopenia is diagnosed when muscle mass and function fall below defined thresholds.

Sarcopenia has important implications on daily life activities for many and represents a growing public health concern. The prevalence of sarcopenia is high, and study rates vary from 10% to 40%, depending on the definition used. Hospitalized and institutionalized older adults have an even higher prevalence.

BLOG: The ABCs of B Vitamins

Signs of sarcopenia often include generalized weakness and loss of stamina. This can affect a person’s ability to carry out routine physical activities. The kicker is, as you begin to withdraw from normal daily activities due to this weakness and loss of stamina, muscle mass and function begin to reduce further and faster. It can become a vicious cycle.

While sarcopenia is most often seen in inactive individuals, the fact that it can still occur in those who maintain activity suggests that there are other causes of sarcopenia at play. There are five main factors believed to be involved in the development of sarcopenia:

BLOG: What are Omega-7 Fatty Acids?

There are a couple approaches with supporting research to treat and/or prevent sarcopenia.

Nutrition and Exercise: Progressive resistance training and adequate protein intake are generally accepted as the most effective approach to managing sarcopenia at this time. Resistance training and nutritional interventions alone, or combined, have improved muscle mass and function in older populations. Although most of these studies identify nutrition and exercise as a valuable approach to gain and retain muscle mass and function in healthy, older populations, the research is still lacking in frail and severely sarcopenic populations. More research is required to determine efficacy of nutrition and exercise intervention in those who already have progressive sarcopenia.

It’s also important to note that the physiological response to exercise and dietary intake can be blunted in older populations compared to younger persons. This phenomenon, referred to as anabolic resistance, must be considered when building a nutrition and exercise strategy. Working with a health and wellness professional when developing a nutrition and exercise program to prevent or slow the progression of sarcopenia is recommended to ensure safety and efficacy.

Targeting inflammation: Inflammation is a standard defense mechanism protecting our bodies from infection and other insults. When controlled properly, our innate inflammatory response can save our lives. The issue with inflammation is when it becomes chronic and excessive, during which irreparable damage and disease can occur. The blunted anabolic response seen in aging muscle is believed to be, in part, mediated by increased inflammatory activity. Controlling inflammation through diet and lifestyle change may support the prevention and attenuation of sarcopenia over time.

Omega-3s: The primary bioactive Omega-3 polyunsaturated fatty acids are eicosapentaenoic acid (EPA) and docosahexaenoic acid (DHA). Once consumed, EPA and DHA are incorporated into cell membranes throughout the body, including inflammatory immune cells and the plasma membrane of the muscle cells. The incorporation into cell membranes ultimately results in decreased inflammatory cytokines, chemokines, adhesion molecules, proteases, and enzymes related to inflammation. The anti-inflammatory and inflammation resolving effects of DHA and EPA are pertinent to both the prevention and treatment of sarcopenia.

A 2021 systematic review and meta-analysis conducted to quantify the effects of omega-3 fatty acids on muscle mass, muscle volume, and muscle function parameters found a positive effect of omega-3 supplementation on overall body muscle mass and strength. In particular, they found that lean body mass, skeletal muscle mass, and quadriceps maximal voluntary capacity (measures lower limb strength) all increased after omega-3 supplementation. These results indicate that omega-3s could benefit populations at risk for sarcopenia. However, a few important details were teased out in this review that are worth mentioning.

First, the positive effects of omega-3s on muscle were found specifically with EPA and DHA —  trial that used alpha-linolenic acid (ALA) did not see effects on any outcome. This means that finding direct sources of EPA and DHA, whether through seafood, marine algae, or supplementation, is critical in obtaining muscle-supporting benefits. Relying on ALA alone to meet adequate omega-3 intake needs is not recommended.

Second, no evidence was found that suggested: “more is better.” It appears that there is a threshold for the positive effects of omega-3s on muscle and trying to achieve numbers beyond that will not provide any further benefits. The studies reviewed in the meta-analysis used doses all over the board, from 125 mg EPA + 105 mg DHA up to 6.5g of fish oil per day. It appears that the most common amounts used in the studies being analyzed ranged from 2,000 – 3,000 mg of EPA + DHA per day. However, because of the significant difference in study design, there was no conclusion on the ideal amounts of DHA + EPA to optimize skeletal muscle support.

Lastly, this meta-analysis covered a wide range of populations, and there were very few studies conducted on patients who had already been diagnosed with sarcopenia. Therefore, while these conclusions suggest omega-3 supplementation can be beneficial in protecting muscle mass and possibly preventing sarcopenia, it’s hard to determine from these results if supplementation would benefit those already suffering from sarcopenia. Future trials are needed to assess the effect of different doses on the populations of interest.

VIDEO: From Omega-3s to the Omega-3 Index

How Long Does It Take to Experience Benefits of Omega-3s?

With increased intakes of EPA and DHA, you may observe an increase in plasma omega-3 levels relatively quickly over the course of days to weeks. This is true for the incorporation of EPA and DHA into the skeletal muscle as well.

Incorporation into white and red blood cells takes longer, and a new steady state is not reached for many weeks to months. Therefore, if you’re looking to support your muscle cells with EPA and DHA, four to eight weeks of supplementation seems to be adequate time for Omega-3s to begin to work their magic.