The “Omega-3 Status” of Average Americans 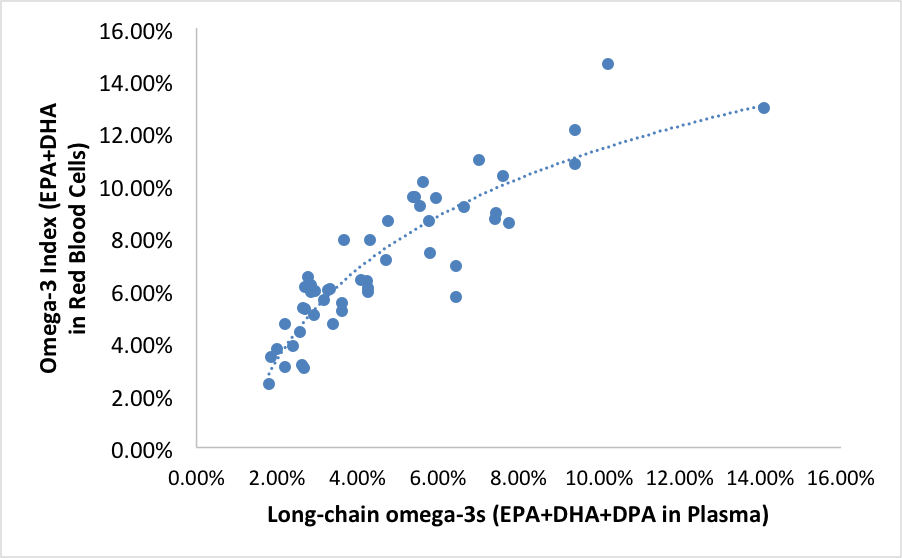 As we previously reported, the Omega-3 Index was measured in a large, representative population of Canadians … and the US has followed suit (sort of)! Dr. Rachel Murphy and colleagues analyzed fasting plasma samples from ~1,400 adults surveyed in the 2003-2004 cohort of National Health and Nutrition Examination Survey (NHANES) for levels of long-chain omega-3 fatty acids, specifically eicosapentaenoic acid (EPA), docosahexaenoic acid (DHA) and docosapentaenoic acid (DPA). In contrast, the Omega-3 Index is measured in red blood cells and includes only EPA+DHA (If you are wondering why DPA is not included see our FAQ for explanation). Thankfully, we have data comparing these two ways of describing “omega-3 status” and can translate some of their findings into the Omega-3 Index using the graph above. Here are some of their findings and the (estimated) Omega-3 Index equivalents:

Based on blood omega-3 levels, 95% of cohort did not reach desired omega-3 levels. In this analysis the authors determined the desired plasma omega-3 levels based on plasma fatty acid levels and cardiovascular outcomes (Virtanen et al. 2012). Based on this study a “cardio-protective” plasma long-chain omega-3 level was 3.86%; this corresponds to an Omega-3 Index of 6.63%. However, this value is the lower end of the “protective” spectrum in the Virtanen paper. Below are some of the other values that could have been chosen to be the “protective” cut-off level which correspond more closely to our recommendation of an Omega-3 Index of 8%.

*Note: Viratinen et al. found that higher omega-3 status was protective in conjunction with a low mercury status in ~1900 Finnish men sampled in the late 1980s. The studies we have used to determine our cut-offs have not been stratified for mercury content and include more representative populations.

Demographic patterns are holding true. Demographic patterns that we have observed in other cohorts (Harris et al. 2013) held true in this group of people. Older individuals had higher omega-3 levels compared to younger individuals, and the Hispanic population had lower omega-3 levels than non-Hispanic blacks and whites. In general, however, everyone had levels lower than the “cardio-protective” cut-off, regardless of how that was defined.

Judging from the averages, the patterns observed by Murphy et al. are similar to what we have seen in previous research studies. While the results are less than ideal, the agreement between datasets gives more credibility to the findings. Low omega-3 levels are pervasive but the solution is simple.