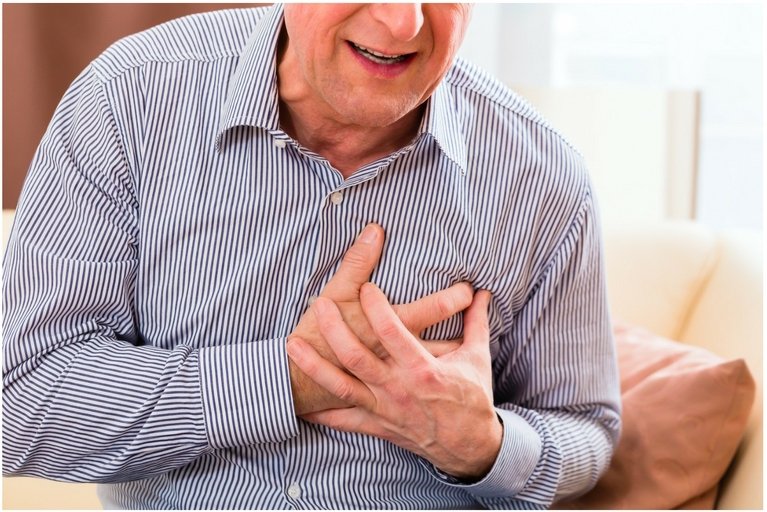 After someone has had a heart attack, some of their heart tissue has been damaged or is dead (“myocardial infarct”). The ability for the heart to “remodel” itself in order to compensate for the dead tissue or even revive said tissue is imperative for the heart to be able to function again; if the heart does not recover well, the individual has a higher risk of dying. Drug and nutrition interventions have been studied to see if they can help the heart recover in a beneficial way. This was the main purpose of the OMEGA-REMODEL study run by Dr. Kwong and his colleagues at three major hospitals in Boston, MA. (Another colleague and co-author of the paper was Dr. William Harris, President of OmegaQuant). In this study, individuals who had survived a heart attack were randomly assigned to be treated with either high doses of omega-3 (3.4 g EPA+DHA per day, Lovasa, GSK) or a placebo (corn oil) for 6 months following a heart attack.

High quality study design: This was a rigorous, large-scale (n=322), randomized, double-blind, placebo-controlled study that used MRIs to measure how the heart functions before and after the supplementation. Patients who survived their heart attacks and agreed to participate began the study 2-4 weeks after they were discharged. This was one weakness of the study, i.e., the failure (inability) to get patients started on omega-3 (or placebo) immediately after their heart attack. Had they done so, it is likely that the observed benefit would have been greater. More than 90% of study subjects were on statins, beta-blockers, and antiplatelet medications, which is standard post-heart attack care. [Note: One reason some think omega-3 supplement studies have not been successful as of late is because the standard of care is now much better than it used to be]. Finally, the Omega-3 Index (% EPA+DHA in red blood cells, measured at OmegaQuant) was determined in all participants to demonstrate compliance to the supplements as well as to use to compare the change in blood levels to the change in cardiac outcomes. This study was well-designed and executed in order to see if omega-3s affected the heart’s recovery.

High-dose omega-3 fatty acids improved LVESVI, and those with the greatest increase in the Omega-3 Index experienced the most improvement: After 6 months of supplementing with 3.4 g of EPA+DHA per day, the omega-3 group had a reduction of LVESVI of 5.4%, whereas the placebo group had an increase in LVESVI of 1.2% (P<0.01). For perspective, an earlier study found that a reduction of 4% LVESVI was associated with a 45% decrease in mortality. Not only did the average LVESVI of the omega-3 group decrease, but a greater increase in the Omega-3 Index was strongly correlated with a greater reduction in LVESVI. For every 1 standard deviation increase in the Omega-3 Index, the LVESVI decreased by an average 4.6% (P<0.001). If you take the top 25% of people with the greatest increase in Omega-3 Index values (which was a change of >5.8%) and compare them to those with the least amount of change (bottom 25%, change of -0.6 to 0.5%), there is a significant linear trend (P<0.0001; see Figure). These stats mean that the extent to which omega-3s were incorporated into tissues (as represented by the red blood cell measurement) was associated with how well the heart remodeled itself, which is then directly related to the risk of heart failure and death. 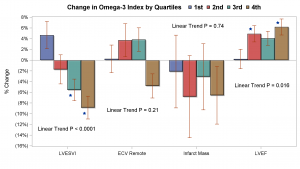 In summary, this was an important study to document the utility of omega-3 fatty acids in heart attack patients in the modern era when patients are prescribed many other drugs as well. Large increases in the Omega-3 Index (about 6%) provided the best cardiac outcomes. Increasing the Omega-3 Index will hopefully become part of the standard of care for heart attack survivors.