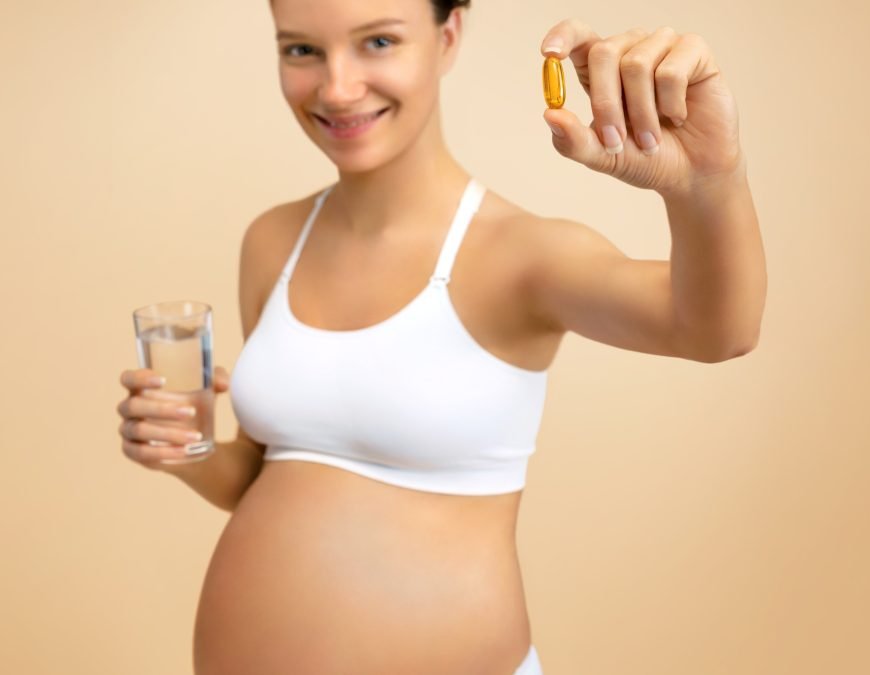 Pregnancy is a time filled with joy and hope, but also a lot of stress. Some of the top worries for expectant moms include: job and money stress, diet, potential birth defects, and preterm birth.

According to the CDC, preterm birth occurs when a baby is born too early, before 37 weeks of pregnancy have been completed. In 2016, preterm birth affected more than 10% of infants born in the US. Preterm birth rates decreased from 2007 to 2014, and CDC research shows that this drop is due, in part, to declines in the number of births to teens and young mothers.

Early preterm birth (<34 weeks) is an even more serious condition than preterm birth because the fetus is even less developed. Every week, every day that gestation can be prolonged in this situation lowers the risks of potential long-term deficits to the infant, not to mention the hospital costs.

What Is the Connection Between Preterm Birth and Omega-3s?

In addition to these strategies, simply increasing your omega-3 EPA and DHA intake could also go a long way toward keeping that bun in the oven a little longer.

According to new research from Harvard School of Public Health in collaboration with Statens Serum Institut in Copenhagen, Denmark, women with low omega-3 levels in their first and second trimesters were at significantly higher risk of early preterm birth (<34 weeks) compared to women with higher levels.

For this study, researchers evaluated plasma EPA and DHA samples from a cohort of Danish moms who gave blood at 9 and 25 weeks (the first and second trimesters). Then they looked 376 early preterm births (<34 weeks) and compared them to 348 normal-term deliveries.

Based on these results, researchers believe that assessing a mother’s omega-3 status could be instrumental in preventing preterm birth. In other words, if a woman knows her omega-3 levels are low, then she can make the necessary dietary modifications to bring those levels into an optimal range.

Researchers, however, hesitated to make broad generalizations about this study since preterm births are low in Denmark and genetics might also play a role. They believe strongly that this research must be replicated in other populations. Still, one thing was clear, that establishing a pregnant woman’s omega-3 status during the different stages of pregnancy could play a crucial role in preventing prematurity.

Using OmegaQuant data, we converted plasma levels of omega-3s (as reported in the Danish study) into red blood cell (RBC) DHA equivalents (which is half of the Omega-3 Index metric). We focused on DHA blood levels rather than the Omega-3 Index (EPA+DHA) because many trials use DHA-only supplements and current pregnancy recommendations focus only on DHA intake.

Our results showed that the odds of preterm delivery were more than 9 times higher in those with an RBC DHA level less than 3.54% compared with those having a DHA level of 4.9% on average. “We believe that having a DHA level higher than 4% early in pregnancy could increase your chances of carrying a baby full term. We would like to see all women tested for DHA levels in early pregnancy, because, if they are low, they can likely reduce their chances of early preterm birth by taking a DHA supplement,” said Kristina Jackson, a research associate with OmegaQuant.

Dr. Harris added, “Until recently, omega-3 intake was confirmed primarily through dietary or supplemental records, but we believe that measuring RBC levels of DHA (i.e. part of the Omega-3 Index) during pregnancy to guide this intake is needed. It’s hard to think of a more important and actionable biomarker in pregnancy with such potentially consequential outcomes.”

LEARN MORE ABOUT THE OMEGA-3 INDEX

This isn’t the first time research has shown that low fish and omega-3 intake, especially DHA, are strongly implicated in preterm births. However, it IS the first time that omega-3 levels have been shown to be a risk factor for early preterm birth when measured during the first and second trimesters.

Several meta-analyses of published clinical trials have concluded that the intake of omega-3 fatty acids EPA and DHA in pregnancy are associated with longer gestation, as well as lower rates of preterm birth. A 2013 supplementation study published in the American Journal of Clinical Nutritionshowed that 600 mg of DHA daily increased maternal and newborn DHA status, gestation duration, birth weight, and length, and lowered the rate of early preterm birth compared to the placebo group.

The study results were from the first five years of a 10-year double-blind, randomized controlled trial that included 350 women who were given either capsules of DHA or placebo starting at 20 weeks of pregnancy and ending at delivery. The average intake for those taking DHA was 469 mg daily compared with placebo.

DHA supplementation resulted in higher maternal and cord RBC-phospholipid-DHA, longer gestation duration, and greater birth weight, and head circumference. In addition, the DHA group had fewer infants born before 34 weeks. And if they were born prematurely, the DHA group experienced shorter hospital stays compared to the placebo group.

The children from this study will be followed until they are six years old and will be evaluated regularly to see if prenatal DHA supplementation was of benefit to their intelligence and school readiness.

In summary, researchers said: “A supplement of 600 mg DHA daily in the last half of pregnancy resulted in overall greater gestation duration and infant size. A reduction in early preterm and very-low birth weight could be important clinical and public health outcomes of DHA supplementation.”

In addition, two large studies, one in the US and one in Australia, are currently testing whether 800-1000 mg of DHA daily taken from early to late pregnancy lowers the risk of early pre-term birth, as the main endpoint. Results from Australia are expected this year while the US study will be complete in 2021. Blood levels of DHA will be measured in both studies as well. “These studies will hopefully provide the evidence needed to call for routine testing of DHA levels during pregnancy,” Jackson said.

PRETERM BIRTHS BY THE NUMBERS 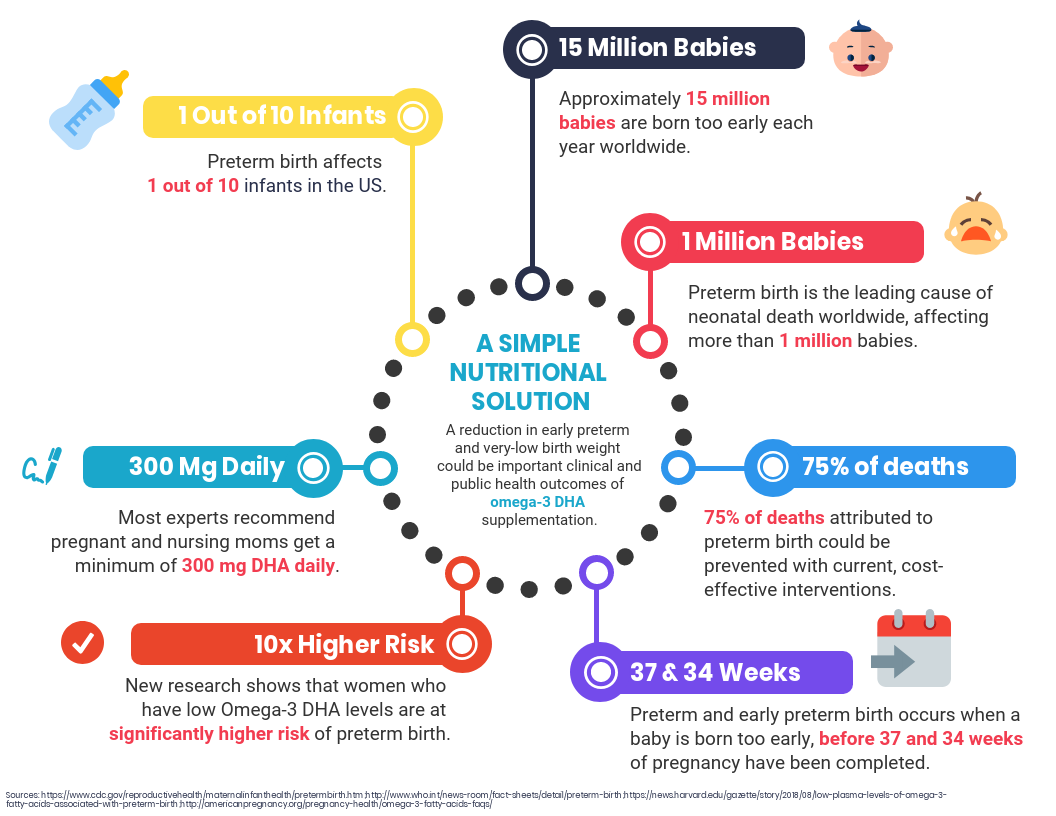 A systematic review published in 2016 also assessed the effects of omega-3 fatty acids on early (<34 weeks) and any (<37 weeks) preterm delivery. For this study, investigators scoured several scientific databases up until 2014.

Given these findings, the researchers said: “Omega-3 fatty acids are effective in preventing early and any preterm delivery. The intervention is simple and easily available and has the potential to influence population-based strategies in the prevention of preterm birth.”

Eat your omega-3-rich fish like salmon and herring. But avoid fish like swordfish and shark, and to some extent white (albacore) tuna since they are high in mercury and carry risks that could outweigh their benefits. And if your appetite for fish just isn’t there, consider taking a supplement containing omega-3s. Just make sure the omega-3s in those supplements are always EPA, and especially DHA.

And if your doctor hasn’t tested your omega-3 level yet, then maybe you should do it yourself. Knowing your Omega-3 Index could help you make sure that you and your baby are getting the optimal amount of omega-3s from your diet and supplementation regimen.

LEARN MORE ABOUT OMEGA-3S AND BREASFEEDING FROM THIS INFOGRAPHIC