The Connection Between the Omega-3 Index & Heart Rate Recovery.

Key takeaways from this Episode:

Since its landmark study in 1989 showing the association between being fit and lower mortality, research from the CCLS continues to evaluate the benefits of regular exercise, healthy lifestyle, and preventive healthcare; effectively proving again and again that exercise truly is medicine.

Those of us that are health conscious are well aware that poor cardiorespiratory fitness (CRF) is a strong predictor of conditions such as cardiovascular disease, type 2 diabetes, and some cancers. The gold standard for measuring CRF is a maximal treadmill exercise test performed in a clinical setting.

Most of us are also aware that omega-3 fatty acids, more commonly known as “fish oils,” are found in fatty fish as well as in supplement form, and have been shown to be beneficial to cardiovascular health. The Cooper Clinic measures omega-3 fatty acid levels in the blood using a method called the Omega-3 Index. The Omega-3 Index is a measure of what percentage of fatty acids in red blood cells are omega-3s.

Comparing each patient’s heart rate recovery with their Omega-3 Index, the researchers found a significant relationship between these two variables such that the higher the Index, the faster the heart rate dropped down. The effect was more marked in women than men, but statistically significant in both.

Researchers also noted that many individuals in this study were involved in healthier habits, which may have also played a role in these results. But lead researcher, Dr. Stephen Farrell, believes these results signal a combination — that both being highly fit and having an optimal Omega-3 Index are keys to maintaining excellent health.

The Fatty Acid Research Institute (FARI) has published a new research paper in conjunction with The Cooper Institute on omega-3s and heart rate recovery.

A recent study from the Cooper Center Longitudinal  Study (CCLS) and FARI sheds new light on this question.

The investigators utilized data from 13,912 healthy men and women who had preventive medical examinations at Cooper Clinic in Dallas over a 10-year period. These examinations routinely included both treadmill exercise testing and measurement of the Omega-3 Index (i.e., red blood cell EPA+DHA levels from OmegaQuant Analytics).

One component of the exercise test is called “heart rate recovery” and it refers to how quickly the heartbeat slows down after maximal exercise. The faster it drops, the healthier the heart.

Comparing each patient’s heart rate recovery with their Omega-3 Index, the researchers found a significant relationship between these two variables such that the higher the Index, the faster the heart rate dropped down. The effect was more marked in women than men, but statistically significant in both. This is summarized in Figure 1 (right) where the Omega-3 Index is plotted on the x-axis, and the drop in heart rate one minute after stopping the treadmill test (measured in beats per minute, bpm) is shown as a positive number on the y-axis. These are the unadjusted values. (For example, 25 bpm on the y-axis means that 1 minute after stopping exercising — i.e., the maximal heart rate — the person’s heart rate dropped by 25 bpm). 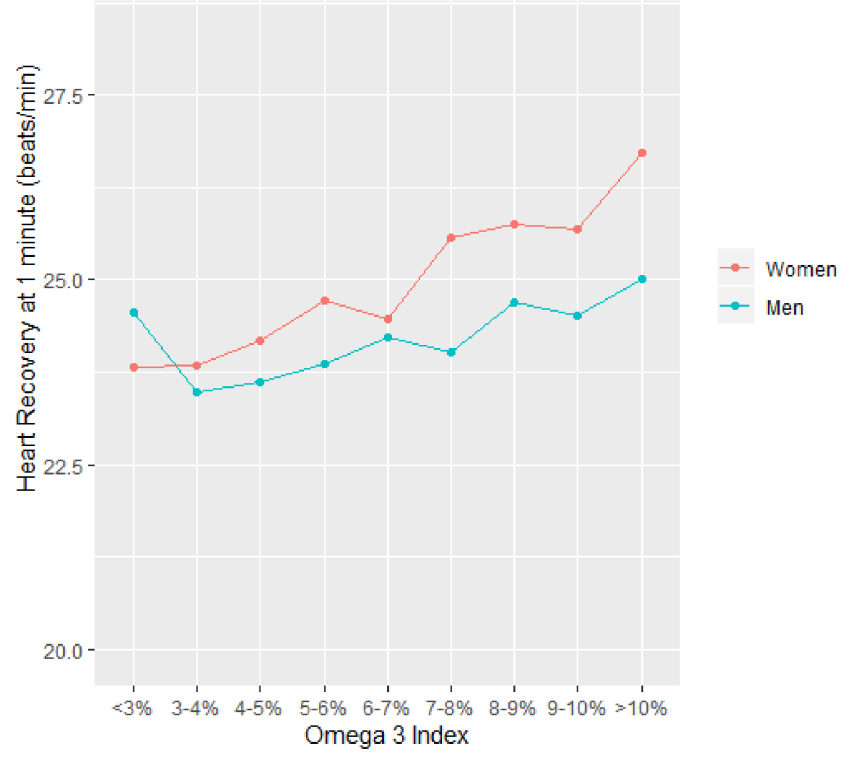 When adjusted for age, maximal METS (a measure of cardiorespiratory fitness), BMI and smoking status, a 2-percentage point higher Omega-3 Index was associated with a 0.35 and 0.69 bpm greater heart rate recovery in men and women, respectively (p<0.001 both).

Dr. William Harris, President of FARI and co-inventor of the Omega-3 Index, who was also an author on the study, commented on the implications of this research. “These new findings from the CCLS harmonize with the known benefits of omega-3 fatty acids on resting heart rate and provide new clues to how these important fatty acids can preserve cardiac health,” he said.

“These benefits on cardiac autonomic tone join other cardioprotective effects of omega-3 fatty acids, including the reduction in blood pressure, chronic inflammation and platelet aggregation, to at least partially explain why omega-3s are good for the heart. Future treatment studies should define the omega-3 intake (and Omega-3 Index) that optimizes this aspect of cardiac function.”

Institute in Kansas City, MO, and a Professor of Medicine at the University of Missouri-Kansas City (who was not involved with the study) remarked that this research provides “strong data supporting the robust cardiovascular benefits of omega-3 fatty acids.”

Dr Farrell received his Ph.D. from Texas Woman’s University in 1996 with a major emphasis in Exercise Physiology and a secondary emphasis in Nutrition. He received his M.S. and B.S. degrees at the University of South Carolina (1983) and Springfield College (1978), respectively. His current position is Senior Investigator for the Division of Research at The Cooper Institute. He conducted hundreds of health/fitness workshops for all branches of the U.S. military, as well as federal, state, and municipal law enforcement agencies. His current research interests include the joint associations among cardiorespiratory fitness, different measures of adiposity, and various morbidity and mortality outcomes. He is a Fellow of the American College of Sports Medicine, and served as a consultant for the cardiovascular fitness component of the National Health and Nutrition Examination Survey (NHANES).

About The Cooper Institute:

The Cooper Institute is dedicated to promoting life-long health and wellness worldwide through research, education and advocacy. Founded in 1970 by Kenneth H. Cooper, MD,

Through these initiatives, The Cooper Institute helps people lead better, longer lives now and “Well. Into the Future.” cooperinstitute.org

The Fatty Acid Research Institute (FARI) is a non-profit research and education foundation. FARI was founded in order to accelerate discovery of the health effects of fatty acids, most notably, the long chain omega-3 fatty acids EPA and DHA. FARI researchers and scientists will focus single-mindedly on publishing high-quality research studies on the multiple relationships between fatty acid levels and human (and animal) health outcomes. These studies will improve the ability to predict risk for disease, and more importantly, suggest ways to reduce risk by changing our diets and/or supplementation regimens. www.fareinst.com

OmegaQuant is an independent, CLIA-certified lab that offers Omega-3 Index testing to researchers, clinicians and the public and sets the standard for fatty acid testing. OmegaQuant performs fatty acid analysis in Sioux Falls, SD, for commercial and academic research collaborators, and for consumers interested in monitoring their nutritional status in both blood and breast milk. Its goal is to offer the highest quality fatty acid analytical services to researchers and to provide simple tests of nutritional status to consumers, with the ultimate purpose of advancing the science and use of Omega-3 fatty acids to improve health. Most recently, OmegaQuant formed a partnership with CSIRO to help process lab samples coming from Australia and the APAC region, with a lab based in Adelaide, Australia. OmegaQuant also has a lab partnership with the University of Stirling, based in the Scotland, to help process blood samples from Europe. www.omegaquant.com