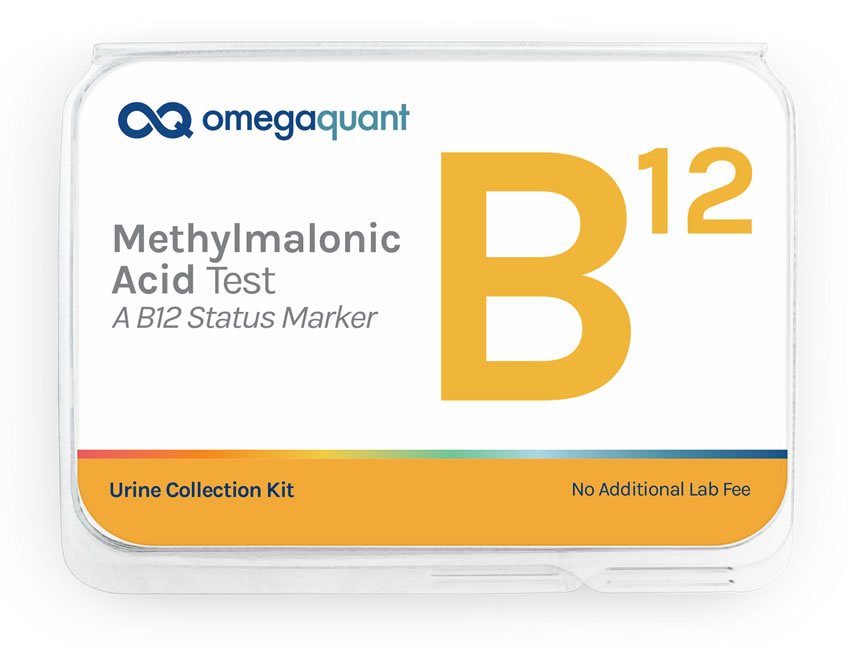 December 8, 2021, Sioux Falls, SD: OmegaQuant, the leader in nutritional status testing, has launched a new Vitamin B12 Test, with a sample collection kit that allows for testing at home. This simple, safe, convenient test measures a substance called methylmalonic acid (uMMA) in the urine, which is a more accurate way of detecting low B12 status. The more MMA you have, the more likely you are to be low in this critical nutrient.

Vitamin B12 is essential for many processes in the cell, and when there is not enough, it causes MMA to accumulate in the cell and spill out into the blood where it eventually gets filtered by the kidney into the urine – where we measure it.

Test results are reported in specific units — mmol MMA/mol creatinine (cr). Optimal vitamin B12 status is indicated when the result is below 2.0 mmol MMA/mol cr. A result above 3.8 mmol/mol cr means B12 status is very low and a true B12 deficiency should be confirmed with further testing and consultation with a healthcare provider.

Vitamin B12 serves several important functions in the body, from supporting red blood cell production and nerve function to brain and heart health. Like most vitamins, B12 must come from the diet but given the limited sources — it is only found in animal-sourced products and some fortified foods — and its absorption challenges, knowing if you are getting enough even if your diet is perfect is more complex than you think.

For example, because B12 comes from animal sources, vegans and vegetarians typically have the lowest B12 intake. Others who are at risk of deficiency are diabetics who take Meformin and those who have undergone bariatric surgery. Last but not least, pregnant women often have higher needs for this nutrient during pregnancy so testing regularly can help ensure they are getting a healthy amount for themselves and their growing baby.

Harvard Health calls vitamin B12 deficiency sneaky and harmful because people are often unaware they are critically low until they develop major health issues like jaundice, joint pain, deep depression, memory loss, incontinence, shortness of breath and more. In one study, 40% of 3000 subjects were found to be Vitamin B12 deficient. If this is true of the rest of America, more that 80 million adults may have a B12 deficiency.

OmegaQuant’s Vitamin B12 test is slightly different from its other tests in that it requires a urine sample instead of blood. Fortunately, the device that comes with the kit allows for safe, easy, seamless sample collection. Once the sample has been collected, you simply mail it back to the lab where it is analyzed. About three to five days after OmegaQuant receives your sample, you will be notified that your results are ready. OmegaQuant provides personalized, actionable health information based on your results.

“Vitamin B12 is an incredibly important nutrient for people of all ages. And knowing your status early on can help you avoid major health issues down the road,” said Kristina Harris Jackson, Director of Research at OmegaQuant. “Our goal at OmegaQuant is to give consumers safe, easy tools that can help them approach their nutrition with a bit more precision. Our new Vitamin B12 test is the latest tool in our toolbox.”

OmegaQuant is an independent, CLIA-certified lab that offers nutritional status testing to researchers, clinicians and the public. OmegaQuant performs analysis in Sioux Falls, SD, for commercial and academic research collaborators, and for consumers interested in monitoring their nutritional status in both blood and breast milk. Its goal is to offer the highest quality fatty acid analytical services to researchers and to provide simple tests of nutritional status to consumers, with the ultimate purpose of advancing the science and use of certain nutrients to improve health. Most recently, OmegaQuant formed a partnership with CSIRO to help process lab samples coming from Australia and the APAC region, with a lab based in Adelaide, Australia. OmegaQuant also has a lab partnership with the University of Stirling, based in the Scotland, to help process blood samples from Europe.