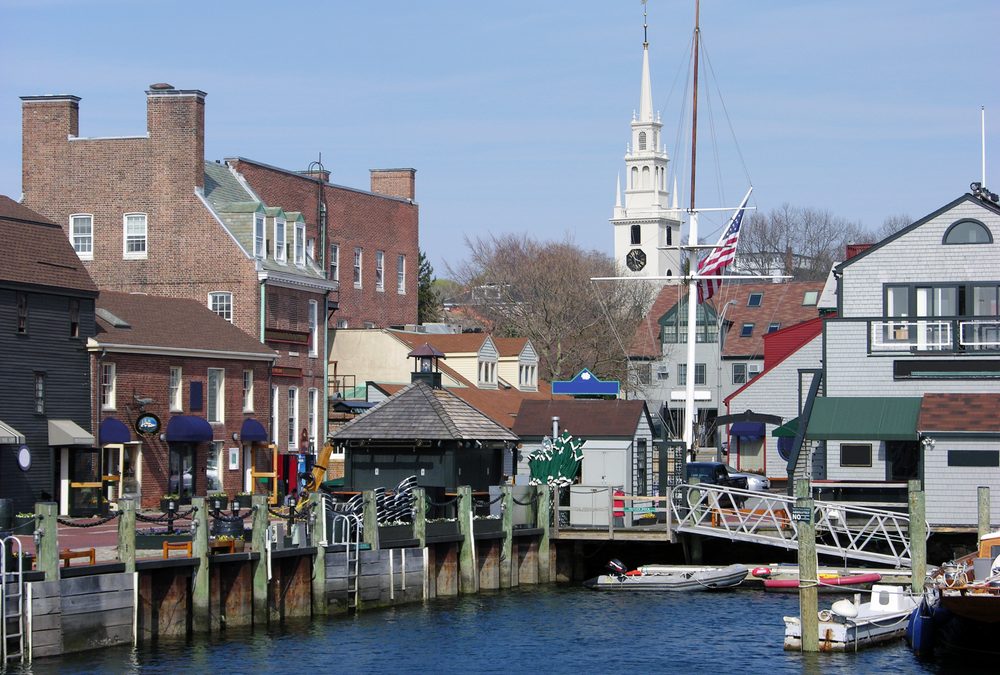 The long chain omega-3 fatty acids EPA and DHA are primarily found in fatty fish like salmon, herring and mackerel, as well as omega-3 supplements. Fish consumption for many is a question of taste, expense, and access. And many experts have suggested that some of these factors, especially access to fish, impacts omega-3s levels. Well, a new study shows that even those who live in coastal communities might not be consuming fish often enough to achieve a healthy blood level, which is described as an Omega-3 Index of 8% or higher.

This new study of 234 individuals in Newport, Rhode Island, revealed an average Omega-3 Index of 5.2%.  Despite close proximity to fresh seafood – a primary source of omega-3s – the coastal town’s lower levels are consistent with research that shows despite eating a balanced diet, 98% of Americans have omega-3 levels below the optimal range.

RB, producers of the omega-3 supplement MegaRed spent this past summer talking with local residents, testing their Omega-3 Index and helping them support their health through free outdoor workouts and nutritional counseling. The goal? To inspire individuals to understand and improve their omega-3 levels.

“The Omega-3 test results in Newport reflect a national trend and should be a wake-up call for many health-conscious Americans,” said Suzanne Steinbaum, DO, Cardiologist, New York, NY. “So many of us who think we are getting all of our nutrients from our diet alone may be wrong. Just like you know your cholesterol or blood pressure, it’s important to know your Omega-3 levels, and make changes if you are low.”

Considered an “essential” nutrient because the body needs them but cannot create them on its own, omega-3s must come from dietary sources, primarily fatty fish such as salmon, mackerel and herring, making it challenging for the average American to meet expert recommendations.

“We know the general public wants to be in control of their own wellness, yet many are unaware of how difficult it is to consume enough omega-3s—no matter where you live and how health-conscious you are,” said Gregory Chabidon, Vice President & General Manager, Global VMS (Vitamins Minerals Supplements) at RB. “At MegaRed, we’re obsessed with the power of omega-3s and want to provide tools for people to take greater control of their health and get more out of each day. That was the inspiration for our new educational campaign called “Omega Town” and the launch of Advanced Total Body Refresh, which provides seven benefits to help support heart, eyes, joint, brain, sleep, stress and skin health.”

“As someone who lives and breathes locally sourced food, I was shocked to learn that I was low in Omega-3s,” said Eddie Montalvo, Chef at Fluke Newport. “By taking part in this program, I learned an important lesson—I didn’t even realize there was a way to test your levels and now I’m going to be more proactive about my health, overall.”

From the Rhode Island Coast to the Stroke Belt

The findings of the Newport, Rhode Island, study mirror what has been playing out all over the country, and even the globe. Just a few months ago, we discussed a study of those living in the “Stroke Belt” in the US, which generally includes states like Charleston, WV; Jacksonville, FL; Indianapolis, IN; Lexington, KY; Memphis, TN; Oklahoma City, OK; and Toledo, OH.

Because little is known about the omega-3 EPA and DHA blood levels (i.e., Omega-3 Index) of people living in the stroke belt, researchers wanted to find out if there is a correlation stroke incidence and omega-3 intake. In other words, could omega-3s play a role in stroke prevention.

The purpose of this study was to gather preliminary information on the Omega-3 Index in people living in the “CVD” belt. Because screenings were generally conducted in lower income parts of town, the SNP cohort is likely to have been of a lower socio-economic status (SES). However, because researchers were unable to collect SES data on this cohort, no conclusions regarding SES and the Omega-3 Index can be drawn from this study.

When comparing the results of this study with general US population as well as other larger studies, like the Framingham Heart Study, Dr. Harris said “Our analysis suggests that the SNP cohort in these cities have depressed Omega-3 Index levels compared to Americans in general and to Framingham in specific. The fraction of individuals in the SNP cohort with an Omega-3 Index in the desirable zone (8%−12%) was 83% lower than that in a very large sample of Americans from a clinical laboratory dataset (i.e., 1.2% vs 7%), and the fraction in the undesirable zone (<4%) was 20% higher (i.e., 42% vs 35%).

“The logical extension of our findings that Omega-3 Index levels are low in this region is that raising the Omega-3 Index by increasing EPA and DHA intake could potentially reduce their elevated risk for CVD. There is accumulating evidence that higher intakes of fish and omega-3 capsules (both of which increase the Omega-3 Index) are good for the heart,” Dr. Harris said in the paper.

The researchers the omega-3/stroke belt paper also pointed out that besides taking fish oil supplements or eating more oily fish (salmon, mackerel, herring, sardines, albacore tuna, etc.), there are now several kinds of EPA/DHA-fortified foods (eggs, fruit juices, milk, bread, spreads, peanut butters) available to consumers. They believe with proper education regarding the selection, preparation and consumption of seafood, the overall health of communities with very low omega-3 levels could be significantly improved. The next step is getting these communities to accept omega-3s as one of the ways they can prevent strokes.

Going back a couple months from the Stroke Belt study, research published in the June issue of Pediatrics showed that American children represent another group that doesn’t eat enough seafood, which could have a negative impact on their health. This is because they are missing out on important fatty acids like omega-3s EPA and DHA, which contribute multiple health benefits for children such as better learning, sleep, attention and cognition.

Many types of fish and seafood offer a variety of important nutrients such as vitamins, minerals, protein, and omega-3s, which have been shown to play crucial roles in child brain, eye and immune system development. However, more than 90% of the animal protein children eat comes from other sources like chicken and beef, which offer little in the way of omega-3s.

This new American Academy of Pediatrics (AAP) report — Fish, Shellfish and Children’s Health: An Assessment of Benefits, Risks and Sustainability, from the AAP Council on Environmental Health and Committee on Nutrition — highlights research on the potential benefits and risks associated with consumption of fish and shellfish, reviewing the evidence for their impact on specific diseases or conditions.

Omega-3s have been studied for numerous benefits, including inflammatory bowel disease, neurologic/cognitive development, behavioral and mental health, sickle cell disease, lipid profiles, blood pressure, depression, attention-deficit/hyperactivity disorder and allergic disorders. Yet most of these studies are geared toward adults or pregnant women, so making definitive conclusions about children is difficult in many cases, according to the study’s authors.

Still, more than a dozen observational studies have shown that a mother’s fish intake likely influences the risk of atopy in offspring. Likewise, research has also shown that eating fish early in life — probably before 9 months of age — may prevent allergic diseases like asthma, eczema and allergic rhinitis.

Studies have also shown that a child’s neurodevelopment may benefit from maternal prenatal fish consumption. In fact, one study noted that seafood intake of less than 340 grams a week (¾ pound) during pregnancy was associated with a higher risk of a child ending up among those with the lowest verbal IQ. Low seafood intake has also been linked to worse outcomes for prosocial behavior, fine motor, communication and social development scores.

The study authors also note that despite concerns about potential contaminants, evidence-based guidance concludes that seafood, especially low mercury choices, should have a larger place in the American diet. However, they believe more research is needed to substantiate seafood’s specific health benefits in children.

It is important for pediatricians to understand that some fish are a rich source of omega-3s EPA and DHA and that these fatty acids are essential nutrients that must be consumed in the diet. If this is challenging for families, then considering taking a supplement is a great alternative to avoid an omega-3 deficiency in children.

BLOG: How Can You Get Your Kids to Consume More Omega-3s? Let Us Count the Ways…

The study authors say that while humans also can elongate and desaturate short-chain “parent” polyunsaturated fatty acids such as alpha linoleic acid (ALA), present in nuts and seeds, into the longer chain omega-3s like EPA and DHA, this process is inefficient and unlikely to result in sufficient levels for optimal health among most individuals.

Fish are the primary natural dietary source to get more omega-3 in children’s diets. These fatty acids can also be concentrated from algal sources and in this form have been added to infant formula and foods such as milk, yogurt, and pasta and increasingly are taken as supplements. Specifically, omega-3s are structural components of neurons in the brain and eye and have anti-inflammatory and immunomodulatory properties, which is why they’ve been studied for their role in neurodevelopment and allergy concerns.

INFOGRAPHIC: Personalize Your Omega-3 Intake with an Omega-3 Index Test 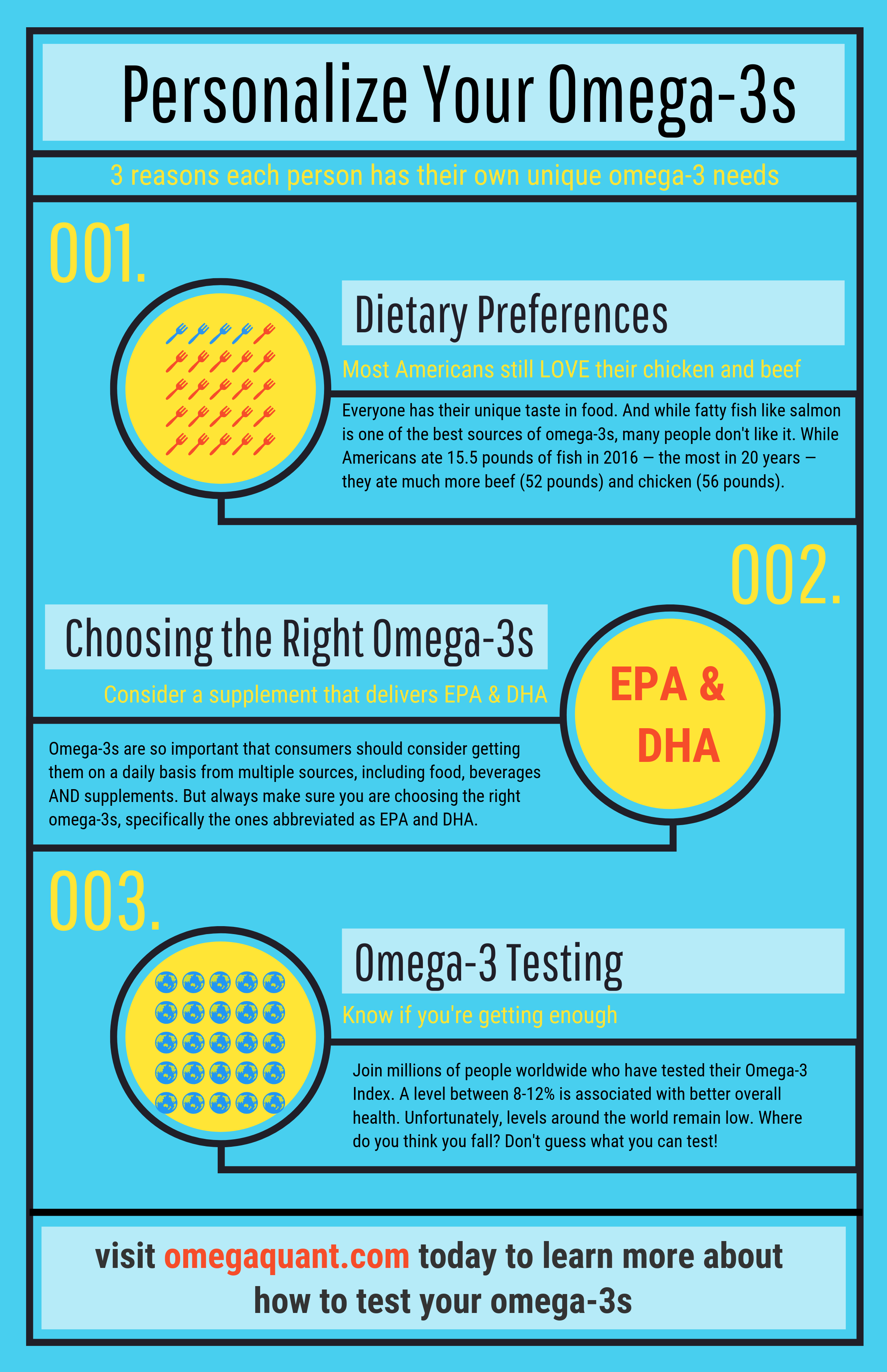