Taking the ‘Prenatal DHA Initiative’ to the Frontlines 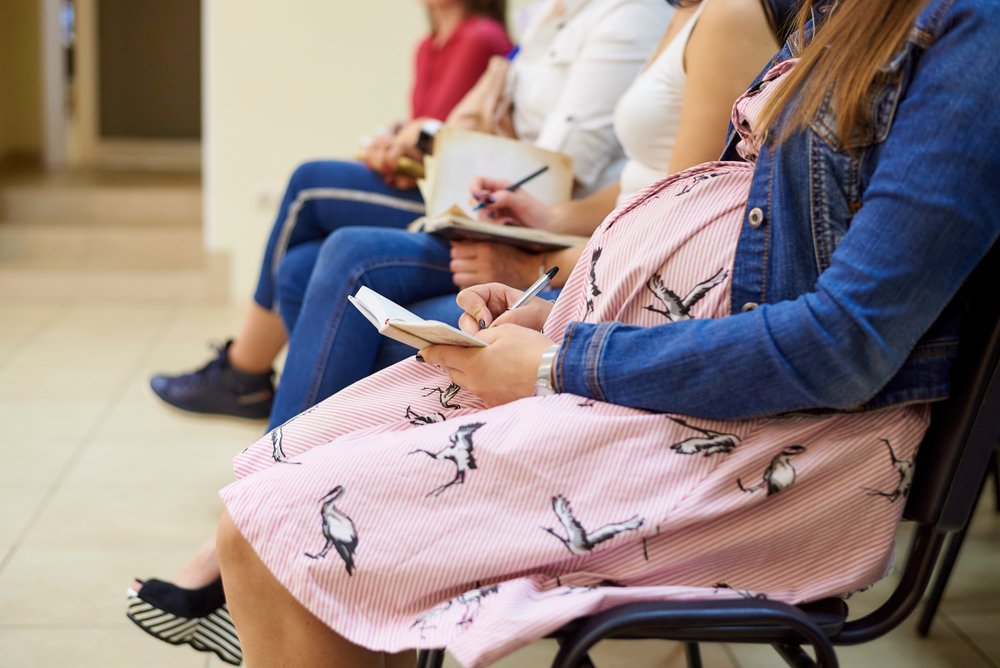 In February, OmegaQuant launched the first-ever Prenatal DHA Test for consumers and health practitioners to help guide the intake of the omega-3 DHA, which is an important nutrient women need before, during and after pregnancy. Alongside this effort, OmegaQuant created an educational initiative to bring more awareness and understanding to the importance of DHA for moms and babies, as well as the need to measure DHA levels to make sure they are getting enough. This educational effort is called the “Prenatal DHA Initiative.”

The #1 reason DHA is important for pregnant women is because it has been identified in the medical literature as a risk factor for preterm birth. Late last year, the Cochrane Review published a meta-analysis of 70 clinical trials involving nearly 20,000 women and found “strong evidence” that when women take omega-3s during their pregnancy, they can reduce the risk of preterm (before 37 weeks) and early preterm (before 34 weeks) birth by 11% and 42%, respectively.

Preterm birth (before 37 weeks) is now the second leading cause of death in children under five worldwide and accounts for half of all newborn deaths, according to a report by the March of Dimes and the World Health Organization (WHO). Early preterm birth (before 34 weeks) puts infants at even higher risk for death and a variety of adverse health problems, which can lead to extended time in the neonatal intensive care unit (NICU) and higher hospital costs.

Preterm births have increased in the last 20 years in almost all countries, and even though treatment for these infants has improved significantly, preventing preterm birth and carrying a fetus to term is still much safer, healthier, and cheaper.

While prematurity can negatively affect the health of both mom and baby, the financial toll is also significant. Figures from the March of Dimes show an uncomplicated birth costs around $4300. Each premature/low birthweight baby costs around $50,000 more. And when maternal costs are figured in, it is almost $60,000 more. 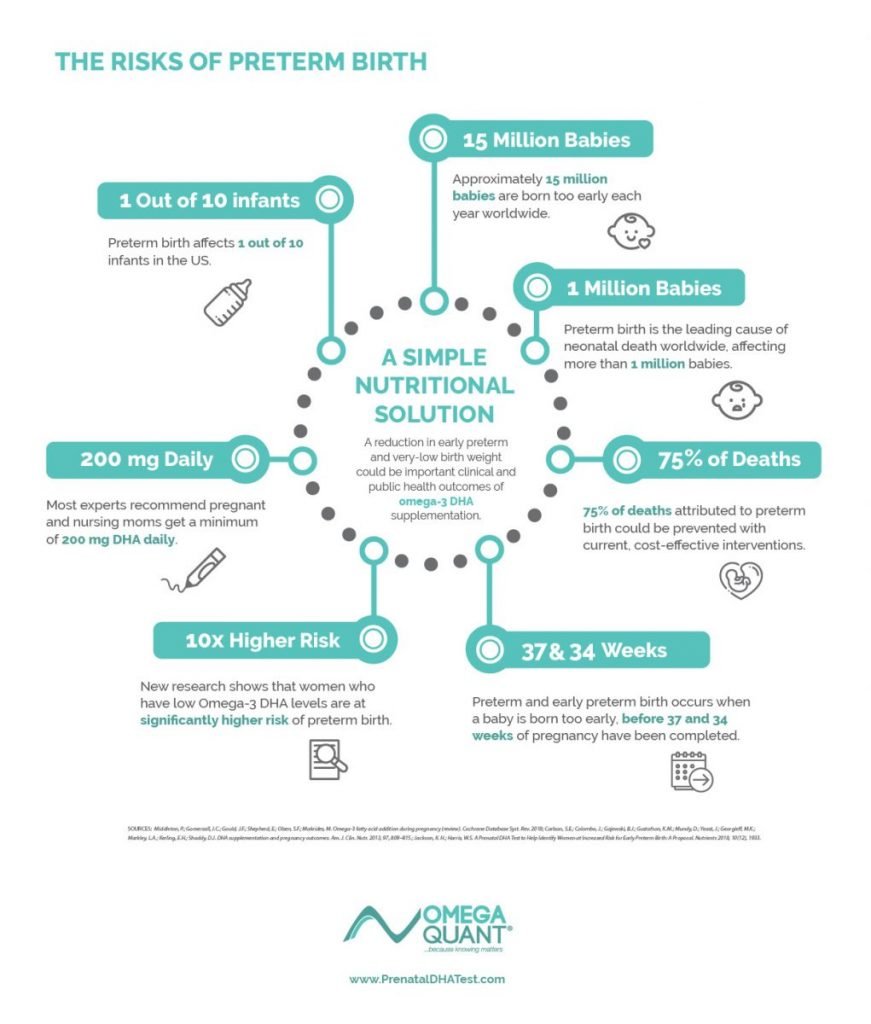 A 2016 study found that using at least 600 mg of the omega-3 DHA daily could save the US healthcare system up to $6 billion by preventing preterm births. The Prenatal DHA Test is a safe, simple and convenient test that will give pregnant women important information regarding their DHA status, so they can modify their intake if they are not getting enough.

Currently, many women, especially those who are pregnant or looking to become pregnant, want to get more omega-3s — DHA in particular — but are unsure which sources to turn to because of all of the conflicting information given to them by their doctors, friends, and others.

Unfortunately, there is a lot of confusion around whether or not to eat fish, and what other sources (i.e., supplements, flax, chia, avocados) will contribute enough DHA to support a healthy pregnancy. As a result, most women don’t get enough DHA. In fact, while the recommended amount of DHA for pregnant women and nursing moms is 200 mg daily from diet and supplements, most only get ~60 mg from their diet and less than 1 in 10 report taking a supplement.

The DHA level a pregnant woman should strive for is at least 5% (i.e., 5% of her red blood cell fatty acids are DHA). If a woman falls below 5%, she can easily increase her DHA level by eating more fatty fish like salmon or taking an omega-3 supplement that contains at least 200 mg of DHA. DHA levels in pregnant women of 4.3% are described in the research as “very low,” with 3.5% defined as “exceedingly deficient.” 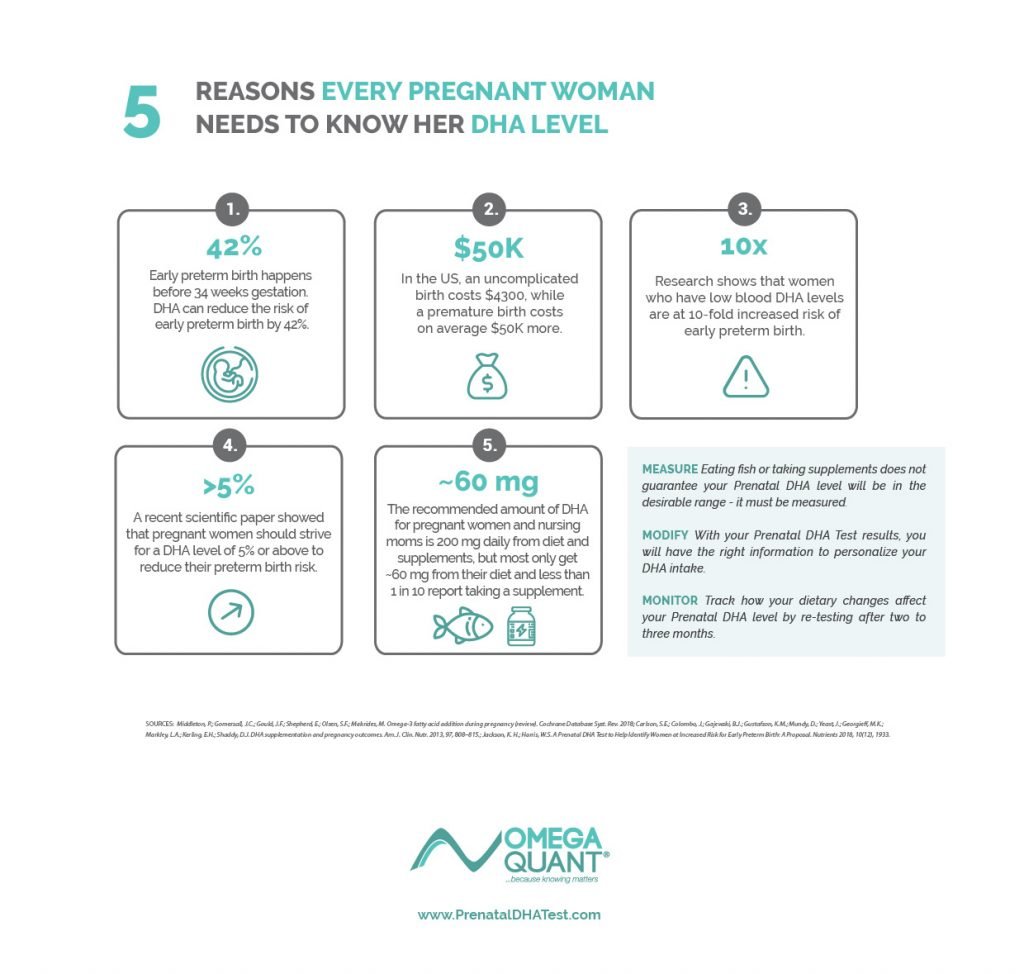 DHA Levels Are Unique to Each Person

DHA levels are unique to each person, so the only way to know if you are getting enough is to test your level. How your Prenatal DHA level will respond to changing your diet or starting supplementation is unique for each woman and hard to predict, which is why your DHA score is so personal.

The Prenatal DHA Test measures the amount of DHA in your blood. It requires a simple finger stick and one drop of blood. In a study published in December 2018, researcher, and Prenatal DHA Test inventor Kristina Harris Jackson, PhD, RD, estimated that 70% of women of childbearing age in the US are below the 5% DHA cutoff.

There are no known risks to having a DHA level that is too high in pregnancy, except for the potential of carrying a baby past 40 weeks. According to  Dr. Jackson, lead author of the December 2018 study, “It’s hard to think of a more important biomarker than prenatal DHA levels that can be safely and easily modified and has such potentially consequential outcomes.”

The Prenatal DHA Test was developed by OmegaQuant, the same company that sells the Omega-3 Index test, which has been commercially available for around a decade. The Omega-3 Index has also been used in more than 200 clinical trials.

OmegaQuant researchers, namely Drs. Kristina Jackson and William S. Harris, PhD, monitored the growing science behind DHA and its impact on preterm birth risk. They realized that having a test specifically measuring DHA, which is well known to help support a healthy pregnancy, would be much more useful to pregnant women and their doctors than the standard Omega-3 Index test.

OmegaQuant has identified several educational opportunities, which fall under the umbrella of the “Prenatal DHA Initiative.” These include: Health Practitioners, who can use the test with their patients further educate them about DHA and monitor intake, especially for pregnant women most at-risk for preterm birth; Prenatal DHA Brands could also use the test to help educate their customers about DHA and support the sales of their prenatal DHA products; The test is also available to Consumers directly who have heard about the importance of DHA during pregnancy and are looking for a simple, safe and convenient way to make sure they are getting enough DHA from their diet; It is also important to partner with Leading Organizations in the field to help spread the word about the importance of DHA and pregnancy and using a Prenatal DHA Test to make sure they are getting enough.

The method for testing DHA levels in pregnant women is very similar to testing both omega-3s EPA and DHA, as carried out with an Omega-3 Index test. The Omega-3 Index has been used in hundreds of clinical trials.

With new research establishing a specific 5% cut point for DHA, using this as a measure in future studies evaluating the impact of DHA on pregnancy and child development will be very important. This test will help evolve research beyond giving pregnant women DHA and observing outcomes during and after pregnancy. Having a firm marker of DHA status (i.e. blood level) will help strengthen this research moving forward.

The simplicity of the test and the advice given to help people raise their DHA level is very straightforward and easy to implement. Having a test that helps guide DHA intake for pregnant women takes the guesswork out of knowing whether or not their diet is delivering enough DHA to reach a protective level of 5%.

The Prenatal DHA Test report results offer advice on how to change your diet to get more DHA. It also comes with a simple fish table so pregnant woman who want to eat fish can educate themselves on which ones deliver the most DHA and have the lowest levels of contaminants. This is key since so many women are confused about eating fish during pregnancy.

This is the first prenatal DHA test ever developed and it is patent-pending. Given the amount of compelling studies connecting DHA with preterm birth risk, especially the most recent Cochrane Review, the launch of the Prenatal DHA Test is very timely. Having a way to make sure women are getting enough of this important nutrient has health, financial and emotional consequences that could significantly change best practices and advice given to pregnant women.

Most recently, OmegaQuant won the Nutraingredients-USA Award for its “Prenatal DHA Initiative,” which was presented June 3rd in conjunction with the IFT Show in New Orleans, LA. OmegaQuant was one of three finalists in the “Personalized Nutrition” category.

According to NutraIngredients-USA, the judges were impressed by the application of omega-3 testing to an especially sensitive population, to not only shine a light on the technology but also on the critical issue of DHA intake during pregnancy and how to increase those levels. 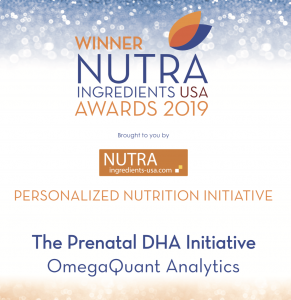 Stephen Daniells, PhD, Editor-in-Chief of NutraIngredients-USA, commented: “Omega-3 status during pregnancy is a hugely important issue that has significant implications for mother and child, and our judges were impressed by the technology and the potential public health benefits of this initiative. This was a very competitive category, with three very strong finalists, so congratulations to the OmegaQuant team on the Prenatal DHA Initiative.”

“Most American women don’t get enough DHA before or during pregnancy, so the Prenatal DHA Test can help personalize the issue and motivate women to get more DHA in their diet,” Dr. Jackson said “Our ultimate goal is to help make pregnancy safer for women and their babies, which is why we want to bring more awareness to the importance of getting more DHA in the diet and using a Prenatal DHA Test to guide appropriate intake.”

VIDEO: Why OmegaQuant Partners With So Many Scientific Organizations