The Healthy Eating Index – How Do Americans Stack Up?

For such a young nation, America has garnered a reputation around the globe. Ask around, and you’ll likely hear of America’s infamy around Hollywood entertainment or sensational sports teams. Yet another aspect of American culture that draws attention, both good and bad, is the food culture.

While food found in the U.S. is as diverse as its people, the quality of the American diet has changed over time, with priority being placed on food that is fast, cheap, and easy. Harvard T.H. Chan School of Public Health reports that in the wake of this fast food culture, unhealthy diets account for almost 20% of U.S. healthcare costs. Possibly even more alarming, nearly half of all American adults have one or more chronic diseases related to poor-quality diets.

What is the Healthy Eating Index?

The Healthy Eating Index (HEI) is a measure of diet quality used to assess how well a set of food aligns with key recommendations of the Dietary Guidelines for Americans. Initially developed in 1995 as a tool to evaluate the extent to which Americans followed the dietary recommendations, the HEI has been revised and updated twice since its inception.

The HEI uses a scoring system from 0 to 100 to evaluate a set of foods’ quality (not quantity). A higher total score reflects that a diet aligns with key dietary recommendations. The HEI can be used by researchers, scientists, and public health organizations to provide a data-driven understanding of diet quality in various ways.

For example, the HEI can be used to (1) assess and monitor the diet quality of the U.S. population over time, (2) study associations between diet quality and health outcomes, (3) evaluate federal nutrition and public health programs, and (4) evaluate food supply to determine if the foods being made available to consumers aligns with dietary recommendations. The most recent HEI-2015 measures how well American’s diets align with the Dietary Guidelines for Americans 2015-2020. A new HEI edition reflecting the 2020-2025 Dietary Guidelines is expected to be released soon.

A Snapshot of the HEI in America

The Center for Nutrition Policy and Promotions (CNPP), a program under the USDA that develops and promotes research-based dietary guidance, used the HEI-2015 and data from the National Health and Nutrition Examination Survey (NHANES) to average HEI-2015 scores for Americans. The average HEI-2015 score for Americans was 58 out of 100 – indicating that the average diets of Americans do not align with the dietary recommendations. Check out the infographic below. 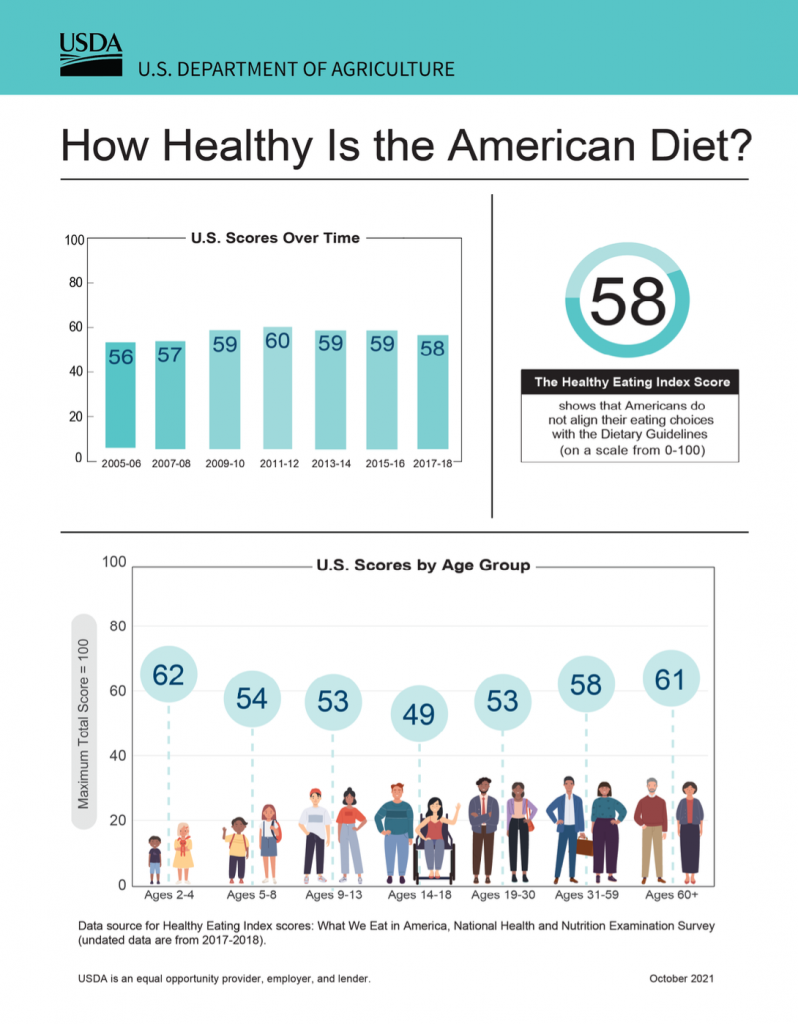 The significance of this score should not go overlooked. Eating patterns over time have interactive and cumulative health effects and, therefore, the potential to prevent or encourage disease. Research has found an inverse association between the HEI-2015 score and all-cause mortality, cardiovascular disease (CVD) mortality, and cancer mortality among men and women.

So, the standard American diet doesn’t quite stack up, but what about the U.S. military members? Nutrition is essential to health and performance, and poor diet quality could affect a service member’s job capabilities.

Rittenhouse et al. published a study in 2021 that simultaneously evaluated diet quality and nutrition-related biochemical markers of U.S. military members. The study found that soldiers (n=492) had a median score of 59.9 out of 100, only slightly higher than the CNPP findings for the general American population (score of 58).

Biochemical testing included lipid profiles, folate, glucose, markers for iron status, vitamin D, omega-3 index (O3i), and high sensitivity C-reactive protein. While median results for several biomarkers fell within normal limits, the study revealed that biomarkers for vitamin D and O3i were strikingly low in the military population — 86.1% of soldiers were below the recommended vitamin D levels of 30ng/mL and 61% had an O3i considered high risk (<4%) and no soldiers had O3i scores regarded as low risk (>8%).

These results indicate that the dietary habits of U.S. service members are not consistent with the Dietary Guidelines for Americans, which may hinder health, job performance, and mission readiness.

How Americans and U.S. Soldiers can Improve Their HEI

According to the Dietary Guidelines for Americans, 2015-2020 (DGAC 2015), most Americans exceed the recommendations for added sugars, saturated fats, sodium, and total calories. Furthermore, there are nutrients and food groups that are essential for health that Americans are not getting enough of, such as vegetables, fruits, whole grains, vitamin D, omega-3 fatty acids, calcium, and potassium.

BLOG: Is Omega-3 Good for Teenagers?

Below are five recommendations for making healthy shifts in eating patterns, which may help improve HEI scores.

2-Emphasize whole grains (instead of refined grains). Evidence indicates that intakes of total grains are close to target amounts recommended by the DGAC 2015. However, where those grains are coming from matters. Most Americans exceed the refined grain limit and don’t consume enough whole grains. Whole grain food items include health promoting nutrients and fiber found in the bran and germ of the grain. Refined grains remove the bran and the germ, along with the important nutrients found in them. Shifting from commonly used refined grains such as white rice, white bread, and white pasta to whole grain options may help Americans increase their HEI scores and health outcomes.

5-Know your nutrient status. Under-consumed nutrients are an additional public health concern. Some nutrients often consumed below the recommended intake in the American diet include calcium, potassium, fiber, vitamin D, and omega-3 fatty acids DHA and EPA. While following the first four recommendations will likely improve the intake of many of these nutrients, some, such as vitamin D, DHA, and EPA, are found in very few food sources. Therefore, individual levels are likely to vary wildly. Testing nutrient status regularly can help guide personal decisions regarding nutrient interventions as required.

VIDEO: When should you take a Vitamin D test?

According to the DGAC 2015, shifts are needed in standard American dietary patterns to improve HEI scores, meet nutrient needs, lessen the risk of chronic disease, and optimize human performance. While individuals need to make mindful food choices and be informed about their health status, other social-ecological aspects of dietary intakes, such as food accessibility and systemic food regulations, should also be considered when shaping American food culture. Concerted efforts among governments, organizations, community leaders, and individuals will be required to create positive change in the American food system and American health outcomes.