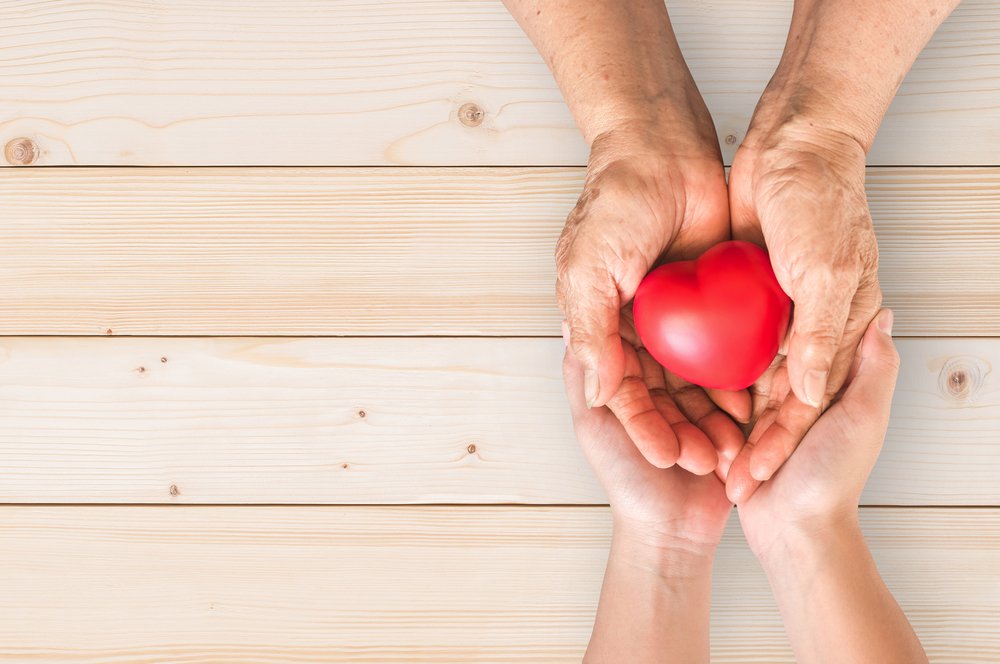 There’s little debate that discounts the positive role nutrients like omega-3 fatty acids EPA and DHA play when it comes to heart health. But what impact does a diet deprived of these same nutrients have in societal health cost savings?

One that’s substantial, and packed with diet-related policy implications, according to the authors of a study published in late December in the Journal PLOS Medicine.

Study co-authors Thiago Veiga Jardim, M.D., Ph.D., at the Harvard T.H. Chan School of Public Health and Dariush Mozaffarian, M.D., D.Ph., M.P.H., with the Friedman School of Nutrition Science and Policy at Tufts University, concluded that “suboptimal diet of 10 dietary factors accounts for 18.2% of all ischemic heart disease, stroke and type 2 diabetes costs in the U.S., highlighting that timely implementation of diet policies could address these health and economic burdens.”

The authors noted that dietary intake data assessments relied on 24-hour dietary recall, a study limitation due to potential measurement errors and the possibility of not fully reflecting a diet over a person’s life span.

Importantly, the study points out that of the annual $50 billion U.S. societal diet-related cardiometabolic disease (CMD) costs ($301 per person), low seafood omega-3 fats intake contributed $12.7 billion ($76 per person) to this total, coming in second only to the low consumption of nuts/seeds ($81 per person).

Other Studies Also Suggest the Need to Raise Omega-3 Levels

Those in the “stroke belt” states—generally considered to include Alabama, Arkansas, Florida, Georgia, Indiana, Kentucky, Louisiana, Mississippi, North Carolina, Ohio, Oklahoma, South Carolina and Tennessee—are almost twice as likely to experience a stroke in their lifetime, according to data compiled since the 1960s by the Centers for Disease Control and Prevention.

The results of the study showed the mean Omega-3 Index (O3I) levels were 4.4%, a lower level than that of 2 comparator cohorts, and much lower than the cardioprotective target for an Omega-3 Index of between 8% and 12%.

This led the study’s lead author, OmegaQuant’s William S. Harris, Ph.D., to suggest that “…raising the Omega-3 Index by increasing EPA and DHA intake could potentially reduce their elevated risk for CVD. “There is accumulating evidence,” he stated in the paper, “that higher intakes of fish and omega-3 capsules (both of which increase the Omega-3 Index) are good for the heart.”

Getting Your Omega-3s Your Way

Fortunately, there are plenty of options for getting the right amount of omega-3 fatty acids into your diet. Overall, seafood is considered the best way to get those recommended doses of EPA and DHA simply because of all the other nutrients that are part of the fish.

Some of the best options when deciding which omega-3 fish to eat include cold-water fatty fish like mackerel, salmon, cod liver, herring, sardines and anchovies.

INFOGRAPHIC: Which Fish Is the Richest in Omega-3s? 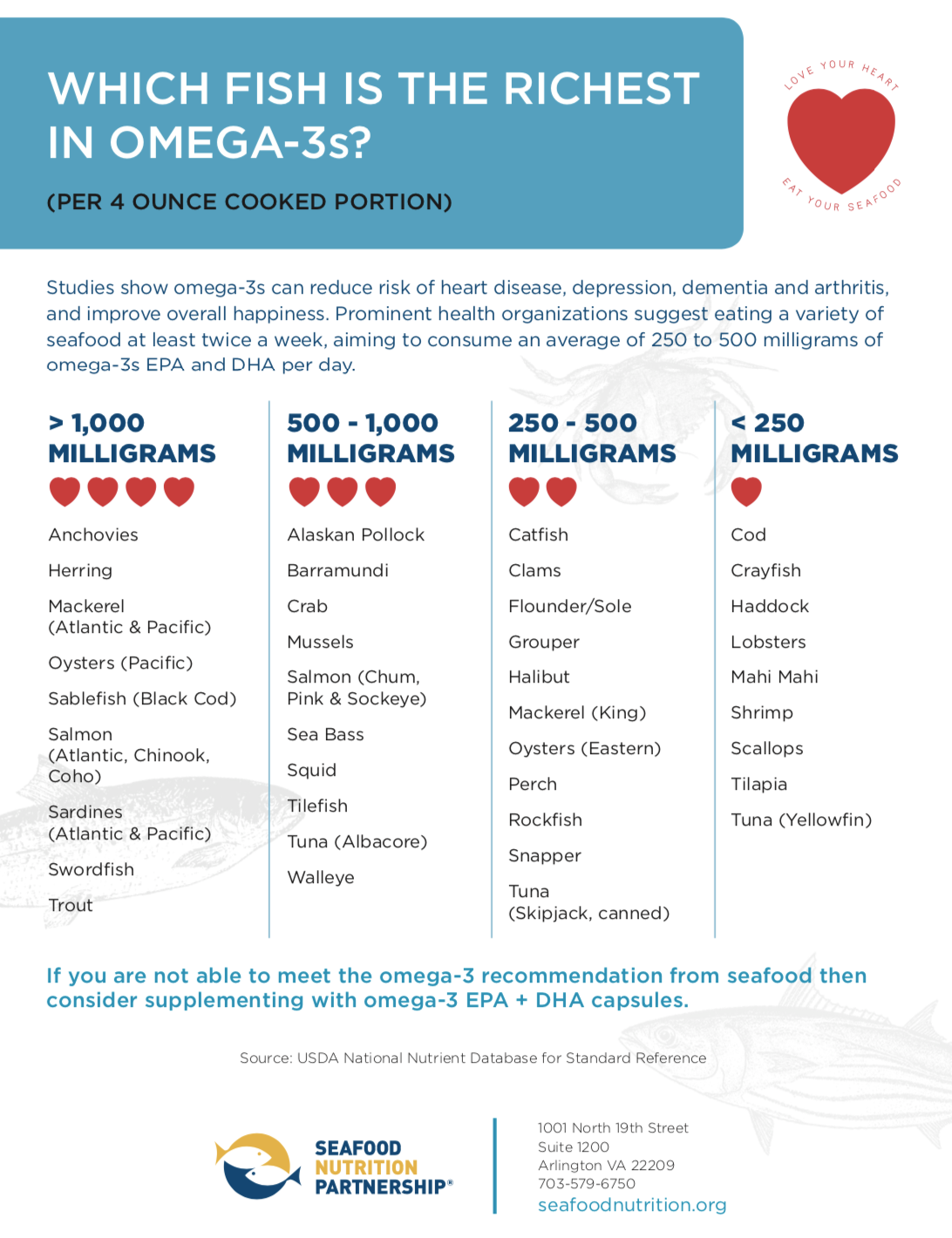 Most government recommendations suggest consuming 2-3 servings of fatty fish per week to achieve 250 mg of EPA and DHA per day. A serving is 3.5 ounces cooked, or about ¾ cup of flaked fish.

If you don’t care for the taste of fish, a fish oil supplement is an excellent alternative. Produced from the tissue of oily fish, these supplements are typically made up of roughly 30% omega-3s and contain high levels of vitamins A and D.  When compared to plant sources of omega-3s, fish oil is known to deliver greater overall health benefits.

Another option is krill oil supplements, made from small shrimp-like crustaceans and packed full of long-chain omega-3 fatty acids.

Vegetarians and vegans can consider algal oil, a type of oil derived from algae, as a powerful source of long chain omega-3 without fish. Available in soft gel form in most pharmacies, algal oil supplements typically provide 400-500 mg of combined DHA and EPA.

How Do You Know if Your Omega-3 Intake is Low?

While it’s not always clear, particularly for consumers, how to judge what an optimal diet means, in the case of omega-3 fatty acids there is a simple and affordable test known as the Omega 3 Index (O3I) that measures an individual’s blood levels of omega-3s EPA and DHA.

Because it has been used in so many studies with so many different research institutions (OmegaQuant has worked with more than 100 to date), the Omega-3 Index has become the standard marker for omega-3 status. An Omega-3 Index score of between 8% and 12% has been identified as the targeted range needed to reap a cardioprotective benefit.

If consumers aren’t aware they’re not getting enough omega-3s in their diet, they’re in good company.  Doctors are often faced with a nutrition education deficiency, in part because medical schools have not placed enough importance on the increasingly viable role of diet as a prevention factor in chronic disease and as a proactive measure for achieving good health.

DSM, a supplier of omega-3s, was intrigued to learn more about physicians’ knowledge of their own dietary habits and specifically omega-3 intake. In 2018, the company invited a small group of U.S. family physicians attending an annual medical conference to voluntarily participate in a research study on this topic.

The fish oil supplier discovered that 57% percent of these physicians reported not consuming the recommended two or more servings of fatty fish per week and 78% reported using an omega-3 supplement less than once a week. In other words, these docs weren’t getting enough omega-3s in their diet to garner the nutrient’s protective benefits.

Interestingly, the physicians in the study group surprised even themselves by demonstrating a significant discrepancy between perceived and actual omega-3 status.  Of those volunteering to test their Omega-3 Index, more than half believed they would score within the desirable range of 8% or higher. The reality was not as rosy. The average Omega-3 Index level among these physicians was only 5.2%, lower than expected and certainly lower than desirable.

Only 5% of those who were tested had the recommended Omega-3 Index of 8% or higher, which suggested that many family physicians may be unaware of their own personal omega-3 status and how it relates to daily dietary habits.

Beyond the Current Recommendations, Implications for the Future

Even with consistent recommendations from leading researchers, health organizations and the government, there’s still more to be done.

The World Health Organization (WHO) recommends that regular fish consumption (1-2 servings per week) provides protection against coronary heart disease and ischemic stroke. The organization urges people to get an equivalent of 200-500 mg of EPA and DHA from each serving.

And the current Dietary Guidelines for Americans, the nation’s cornerstone for nutrition policy, recommends the general population should eat at least 8 ounces of seafood per week with the aim to take in at least 250 mg per day of omega-3 fatty acids EPA and DHA.

OmegaQuant’s Dr. Harris, who is also an internationally recognized expert on omega-3 fatty acids, says he’s encouraged by the progress that’s been made since he founded this company in 2009. But he sees even more opportunities to continue to advance the science surrounding the use of omega-3 fatty acids and omega-3 blood testing to improve health.

“More scientific research, more outreach to healthcare practitioners, more public/private partnerships, third party reimbursement testing, and more education,” says Dr. Harris. “These are the core strategies that will allow us as individuals and as a society to take full advantage of the health and economic benefits of omega-3 EPA and DHA.”

The Omega-3 Index is a self-ordered and self-administered test you can do at-home – it does not require an office visit or a doctor’s order. Because it is not ordered by a doctor, the cost of the test cannot be reimbursed by third party payers (insurance or Medicare).

When the test IS ordered by a doctor, then it can be at least partially reimbursed, with either the physician’s office or the patient him/herself submitting for reimbursement. The good news is that the Omega-3 Index test can, in most settings, be covered by HSA/FSA plans.

First proposed for use in medical care about 15 years ago, the Omega-3 Index is still a relatively new test from a medical standpoint. A new blood test usually takes about 30 years to be standardized and finally adopted by the medical community.

With the awareness of omega-3s being nearly universal these days, the increase in research funding and positive results from recent studies will only continue to fuel the uptake of this very important nutritional biomarker.

VIDEO: Why OmegaQuant Partners With So Many Scientific Institutions