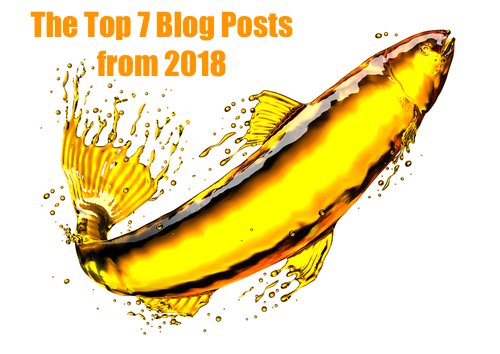 2018 was a great year for omega-3s EPA and DHA with more positive news than bad for change. And it seems you liked our research highlights the most. Below are the most-read blog posts of 2018. Enjoy the recap!

In this early October blog, we discussed the early release of results from the REDUCE-IT study, which was initially publicized in Forbes ahead of the actual full publication in the New England Journal of Medicine. The topline results were indeed impressive, showing a 25% reduction in heart attack risk for those taking the prescription omega-3 EPA concentrate called Vascepa.

Delivered in a 4-gram dose, Vascepa was developed by the biopharmaceutical company, Amarin. Based on the dramatic preliminary results, the company said it was expanding its sales team to more than 400 people. Meanwhile, Amarin stock quickly shot from $2-3 per share to more than $17 the day after the results of the study were made public. Since September, however, the stock has been fluctuating between a low of around $13 and a high of $23.

In December, we published a blog about a new study that investigated omega-3s and bleeding risk. While mostly sensationalized, the risk of omega-3s and bleeding has always been an issue for people who want to take omega-3s but have been told by their doctor that there is an increased risk of bleeding, similar to Aspirin, especially if they take blood thinners or are headed for surgery. Hopefully this new systematic review will put this issue to bed — once and for all.

CHECK OUT THIS VIDEO OF DR. BILL HARRIS DISCUSSING OMEGA-3S AND BLEEDING STUDY

The study, published in late November in Circulation, showed that high-dose fish oil did not increase peri-operative bleeding in surgery patients. In fact, higher blood omega-3 levels were associated with a lower risk of bleeding.

These findings come from a secondary analysis of the Omega-3 fatty acids for the PrEvention of post-opeRative Atrial fibrillation (OPERA) study. More than 1500 patients scheduled for cardiac surgery were randomized to omega-3s or placebo. The dose was 6.5-8 grams of EPA+DHA over 2 to 5 days pre-surgery, and then 1.7 grams per day beginning on the morning of surgery and continuing until discharge.

The researchers said the results of this study support the need to revisit the current recommendations to stop fish oil or delay procedures for people on fish oil before cardiac surgery.

In the July, a study published in the journal Hypertension found a correlation between the Omega-3 Index and blood pressure in healthy young adults. The study evaluated 2036 people between the ages of 25 and 41. Anyone with cardiovascular disease, known diabetes or a body mass index (BMI) higher than 35 kg/m was excluded. The average Omega-3 Index was 4.58%. An ideal Omega-3 Index is 8% or higher.

The researchers concluded that a higher Omega-3 Index is associated with statistically significant, clinically relevant lower SBP and DBP levels in normotensive young and healthy individuals, and that diets rich in omega-3 fatty acids — specifically containing EPA and DHA — might be a strategy for primary prevention of hypertension. These findings support a 2014 meta-analysis by Miller et. al., which concluded that omega-3 fatty acids have blood-pressure-lowering effects.

And this couldn’t have been better timing — especially since the American Heart Association just announced a year ago that more than 100 million Americans have high blood pressure, putting them at risk for heart attacks and strokes. That is nearly half of all American adults!

The best way to modify your Omega-3 Index is to get more EPA and DHA from fatty fish such as salmon or omega-3 supplements.

#4 – People with More of these Nutrients in their Blood Tend to Live Longer, Healthier Lives

An October study published in the British Medical Journal showed an association between higher blood levels of omega-3s EPA and DHA and healthy aging.

Blood levels of the long chain omega-3s EPA, DPA and DHA, as well as the short-chain omega-3 ALA, were measured three times over the ensuing years and averaged to give a long-term estimate of omega-3 status.

The research team reported that higher overall levels of the long-chain omega-3 fatty acids EPA, DHA and DPA, but not of the short-chain ALA, were found in those individuals who exhibited the healthy aging pattern, and specifically an 18% lower chance of unhealthy aging.

Two highly anticipated studies on omega-3s — REDUCE-IT and VITAL — were presented at the American Heart Association meeting in early November.

In a Washington Post article, the lead investigator of the REDUCE-IT study — Dr. Deepak L. Bhatt, Executive Director of Interventional Cardiovascular Programs at Brigham and Women’s Hospital in Boston — said, “Honestly, I’ve been doing clinical trials for a long time. And I’ve not been involved in a trial that has this much potential to improve the lives of perhaps tens of millions of people.”

In the same article, leader researcher VITAL, JoAnne Manson, Chief of the Division of Preventive Medicine at Brigham and Women’s Hospital, said the study “further supports . . . the benefits of omega-3 in heart health.” She added that the study uncovered positive signals about fish oil consumption.

The Washington Post article was one of the most balanced, while some of the others lead with negative headlines, even though many of the outcomes and conclusions were more positive than originally expected, especially for the VITAL study.

WATCH DR. HARRIS BREAK DOWN THE REDUCE-IT AND VITAL STUDIES

A March study published in the Journal of Clinical Lipidology looked at the value of measuring blood levels of EPA and DHA omega-3 fatty acids to assess an individual’s risk for developing certain diseases. In this new report from Harris and colleagues, the “Omega-3 Index” (the EPA+DHA content of red blood cell membranes) was measured in 2500 participants in the Offspring cohort of the Framingham Heart Study. (This group is largely made up of the children of the original Framingham study which began in 1948.) The results showed that the risk for death from any cause was reduced by about 33% when comparing the lowest Omega-3 Index participants to the highest.

All of the individuals in the study were free of known cardiovascular disease (CVD) at baseline. The researchers primarily focused on total mortality (death from any cause) as an endpoint, but also tracked death from CVD, cancer and other causes. In addition, they reported the associations between Omega-3 Index levels and a risk for any CVD event – fatal or not, heart attack or stroke.

The population was 66 years of age at baseline and there were a few more females than males. The study followed these individuals for disease outcomes until about age 73. The results were statistically adjusted for a wide variety of factors that could influence the outcomes.

According to the study, which was funded by the National Institutes of Health (NIH), a higher Omega-3 Index was associated with a lower risk for total CVD events, total coronary heart disease events, and total strokes. The category most strongly associated with the Omega-3 Index was non-CV, non-cancer deaths – deaths from all other causes, all of which suggests a wide spectrum of beneficial actions of EPA and DHA in the body that are not just linked with one pathological process (like plaque build-up in arteries).

At #1 – perhaps not surprisingly – is our blog explaining what the Omega-3 Index is. The Omega-3 Index has been around for more than a decade, but recently published research is really putting some extra support behind this important risk factor for heart disease.

The Omega-3 Index is actually two things. Most important, it is a risk factor for heart disease, just like cholesterol. But it is also an actual test you can take to assess your omega-3 status. Unlike a cholesterol test, you don’t need a doctor obtain an Omega-3 Index test. In fact, most doctors won’t automatically test your omega-3 level during annual well visits, even though most people don’t get sufficient amounts of these nutrients from their diets.

Most consumers are not familiar with the Omega-3 Index test. In fact, many don’t even know about the health risks associated with low omega-3 levels. And for those who actually do understand what all of this means, there is still a lot of confusion.

Low omega-3 levels are associated with a multitude of health issues such as heart disease, Alzheimer’s, eye disease, and much more.

No matter how healthy you think you are, you should always know your number. Don’t guess what you can test!

LISTEN TO DR. BILL HARRIS EXPLAIN WHY YOU NEED TO TEST YOUR OMEGA-3 LEVEL