This Is Your Brain On Omega-3s 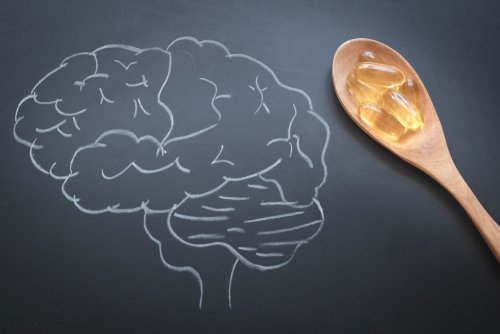 The human brain weighs about 1.5 kg or 3.3 lbs, and 60% of it is fat. In fact, it’s one of the fattiest organs in the human body. It’s also one of the most important organs, as it plays a role in just about every major body system.

But while most of us are busy focusing on reducing our fat intake [1], there’s one type of fat you don’t want to cut back on, and that’s omega-3 fatty acids — specifically EPA and DHA. They mostly come from marine sources like fish, as well as omega-3 supplements that contain fish oil, krill oil or algal oil. And they are among few nutrients actually found in the brain.

Omega-3 fatty acids are essential nutrients that regulate your brain’s structure and ability to perform. And EPA and DHA in particular are known to play a specific role in the structure and function of the brain, especially during the aging process. The pathways underlying their presence and uptake are crucial in understanding how they impact brain development.

DHA is already present within the brain and, compared with other tissues such as liver or plasma, in a very high concentration [2]. In fact, roughly 30% of the “gray matter” that contains most of the neuronal cell bodies in the mammalian brain is comprised of DHA [3]. It has been suggested that the brain maintains these high DHA levels primarily via the uptake of DHA from lipids in circulating blood. These lipids are said to cross through the blood-brain barrier, rather than possessing any active endogenous biosynthesis abilities, which is reportedly lower in the brain compared to other tissues [4].

Compared to DHA, brain EPA levels are considerably lower, with one study reporting EPA deficiencies 250–300 lower than DHA [5]. This study, which looked at the cause of such differences in brain fatty acid levels, suggested that the low levels of EPA may be the result of its rapid β-oxidation upon its entry into the brain. Coupled with the fact that EPA and DHA have been found to enter the brain at similar rates [6], it is also likely that differential efficiencies in the metabolism and incorporation of these fatty acids into the blood and other tissues inadvertently impacts the uptake of EPA via these sources [7].

It is well known that cognitive function reaches its peak during middle adulthood and declines as the body and brain begin to age. It is during the later aging process that the brain becomes more susceptible to cognitive impairment and dementia, both of which are commonly linked with the chronic neurodegenerative disease known as Alzheimer’s.

BLOG: 3 Ways Older Adults Can Train Their Brain as They Age

According to Dementia Australia, three in 10 people over the age of 85 are affected by dementia, and 70% of those affected have Alzheimer’s disease. These statistics are somewhat mirrored in America, where roughly 5.5 million Americans are living with Alzheimer’s disease, as reported by the Alzheimer’s Association, with almost two-thirds of these being women.

While the rate of progression varies from person to person, the biggest risk factor is increasing age, where the brain undergoes several widespread changes such as a reduction in volume and weight [8], an increase in oxidative stress [9], and changes in membrane lipid composition [10].

There is an abundance of studies reporting that omega-3s deliver big health benefits, with a large portion of these focusing on the impact of DHA and EPA on cognitive function and the onset of neurodegenerative diseases as the brain begins to age [11].

BLOG: People with More of These Nutrients in Their Blood Tend to Live Longer, Healthier Lives

In a study by the Framingham cohort, participants in the top quartile of plasma DHA levels reduced the risk of Alzheimer’s disease and all-cause dementia by 37% and 47%, respectively [12]. Several studies reporting a link between omega-3 intake and a decrease in the neurodegenerative pathogenesis of Alzheimer’s disease, found that an increase in fatty acid presence in the brain reduced neuroinflammation and oxidative damage, and increased levels of brain derived neurotrophic factor, also known as (BDNF) [13], which led to a reduction of amyloid-β production and increased synaptic protection.

Yet another study evaluating 55 men and women with a mean age of 45 years, reported that higher rates of EPA and DHA dietary intake were associated with larger hippocampal volume; results were minimally adjusted for age and sex [14].

The Omega-3 Index is a Risk Predictor for Dementia

There is a growing body of evidence showing that measuring the red blood cell (RBC) fatty acid composition is a reliable biological indicator of dietary intake of EPA and DHA [15, 16]. Relative to total fatty acid concentration, the percentage of EPA + DHA in RBC is known as the Omega-3 Index [17].

Researchers have investigated the dose-response of the Omega-3 Index through supplementation with increasing doses of omega-3s, reporting a higher Omega-3 Index as the dose of omega-3 increased [18]. Another dose-response study found that supplementation of 0.93 and 1.86 g/d of EPA + DHA over 12 months increased the presence of these fatty acids in RBC by 3.6% and 4.5%, respectively [19].

These results suggest that changes to the Omega-3 Index to the extent that they reflect normal, age-related brain atrophy of 1 to 2 years, can be achieved through diet modification and/or supplementation.

The Omega-3 Index is also considered to be a significant predictor of risk for developing dementia, as presented by William Harris, PhD, and his team [20]. The association between baseline RBC EPA + DHA composition and the risk of dementia was investigated annually in the Women’s Health Initiative Memory Study (WHIMS) of 6706 women aged ≥65 years.

Results showed that women with high DHA and EPA exposure had a significantly lower risk of dementia and a slower rate of cognitive decline over a median follow-up period of 10 years, compared to those with low exposure; the adjusted 15-year absolute risk diﬀerence for dementia was 2.1% [20]. It has also been suggested that these fatty acids might improve or delay a decline in memory and the ability to carry out everyday tasks in people with dementia.

These findings are supported by another study that reported a direct relationship between an increase in brain volume and cognitive function, and the Omega-3 Index [22]. Furthermore, the consumption of omega-3-rich fish like salmon at least 3 times a week has been shown to reduce the risk of subclinical vascular brain abnormalities [23].

VIDEO: There are Two Ways to Raise Your Omega-3 Index