Two New Studies Show Why You Need to Take Omega-3s 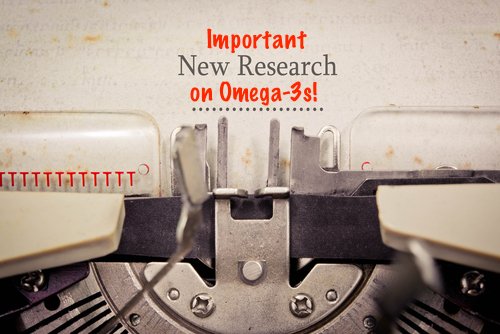 This past Saturday, November 10th, two pivotal studies on omega-3s — REDUCE-IT and VITAL — were presented at the American Heart Association meeting. The results of these studies demonstrated unequivocally why you need to take omega-3s.

In a Washington Post article, the lead investigator of the REDUCE-IT study — Dr. Deepak L. Bhatt, Executive Director of Interventional Cardiovascular Programs at Brigham and Women’s Hospital in Boston — said, “Honestly, I’ve been doing clinical trials for a long time. And I’ve not been involved in a trial that has this much potential to improve the lives of perhaps tens of millions of people.”

In the same article, leader researcher of VITAL, JoAnne Manson, Chief of the Division of Preventive Medicine at Brigham and Women’s Hospital, said the study “further supports . . . the benefits of omega-3 in heart health.” She added that the study uncovered positive signals about fish oil consumption.

The Washington Post article was one of the most balanced, while some of the others lead with negative headlines, even though many of the outcomes and conclusions were more positive than originally expected, especially for the VITAL study. So let’s dive into the details a bit more.

REDUCE-IT, which stands for Reduction of Cardiovascular Events with Icosapent Ethyl–Intervention Trial, was conducted on a fish oil-based drug called Vascepa, from a company called Amarin.

Fatty fish like salmon also contain the omega-3s EPA and DHA, but they are delivered in both triglyceride and phospholipid form. Think of the triglycerides and phospholipids as carriers of omega-3s to the places your body needs them most, like the heart, brain and eyes.

People in the study took either 2 grams of Vascepa twice daily or a placebo. They continued this for a period of five years. Researchers wanted to find out if Vascepa combined with statin therapy is superior to statin therapy alone, when used to prevent long-term cardiovascular events in high-risk patients with mixed dyslipidemia.

Vascepa was shown to reduce cardiovascular events by 25%. Some of the other important findings, according to the Global Organization of EPA and DHA Omega-3s (GOED):

WATCH THIS VIDEO OF DR. BILL HARRIS DISCUSSING THE MEDIA CONFUSION AROUND THESE LATEST STUDIES

The VITAL study, which stands for VITamin D and OmegA-3 TriaL (VITAL), followed more than 25,000 people for five years to see if 1 gram of fish oil (providing 840 mg EPA+DHA; Lovaza, GSK) or 2000 IU of vitamin D3 (generic cholecalciferol) could reduce the risk of developing cancer, heart disease, and stroke in people who do not have a prior history of these illnesses. VITAL is the largest and most ethnically diverse omega-3 prevention trial ever conducted.

Lovaza differs from Amarin’s Vascepa because it contains both EPA and DHA. The EPA+DHA dose in VITAL (840 mg/day) was also a lot lower than the EPA dose in REDUCE-IT (4000 mg/day). Finally, VITAL differed from REDUCE-IT because the subjects were otherwise healthy and not being treated with statins.

Lovaza was the first FDA-approved omega-3 “drug” and Vascepa was the second. They have both been available by prescription for several years, but only for the treatment of “very high triglycerides.”

For VITAL, omega-3s EPA and DHA demonstrated no benefit for cancer outcomes compared to placebo. Further, it did not achieve the trial’s primary outcome of significantly reducing major cardiovascular events. However, GOED asserts the following results were statistically significant, providing long-awaited evidence that omega-3s do provide benefits for primary prevention of cardiovascular disease:

The results from these studies are positive for omega-3s and the reduction of cardiovascular-related issues, but one of the most important takeaways is that dose matters. As noted above, people in the VITAL study were taking <1 gram of EPA and DHA, and the REDUCE-IT participants were taking 4 grams of EPA only. The modest results of VITAL were still impressive considering the relatively low dose used. So one has to wonder if the results might have been more dramatic had the dose been higher, just like REDUCE-IT.

Dr. Bill Harris, a prominent omega-3 researcher, believes the most likely reason for the beneficial outcomes in REDUCE-IT was that the dose given probably increased the Omega-3 Index up to near or above the 8% target value, something that other trials using lower doses have not done. The exception to that rule is JELIS where the average Omega-3 Index was above 8% to begin with, and only went higher with 1.8 g of EPA.

The most recent Cochrane meta-analysis and many studies prior have also highlighted the issue of dose when it comes to omega-3s. The doses of EPA and DHA typically used in these studies are unlikely to produce a cardio-protective omega-3 blood level, which would be 8% based on the Omega-3 Index. Most likely, the people in these studies reached an Omega-3 Index of about 6%, which is still 2 percentage points away from significantly reducing your cardiovascular disease risk.

READ THE BLOG ABOUT THE COCHRANE META-ANALYSIS

The key takeaway message from these studies is that you should do whatever it takes to get your Omega-3 Index to at least 8% in order to reduce your risk for cardiovascular disease. If you don’t have access to drugs like Lovaza or Vascepa, then dietary supplements or fatty fish with a healthy amount of EPA and DHA are certainly good places to start. But before you do that, find out your own personal Omega-3 Index at baseline. Once you know that, then you can make an informed decision about how much EPA and DHA you need to get into that 8% range, the cardio-protective zone.

WATCH THIS VIDEO ABOUT THE OMEGA-3 INDEX