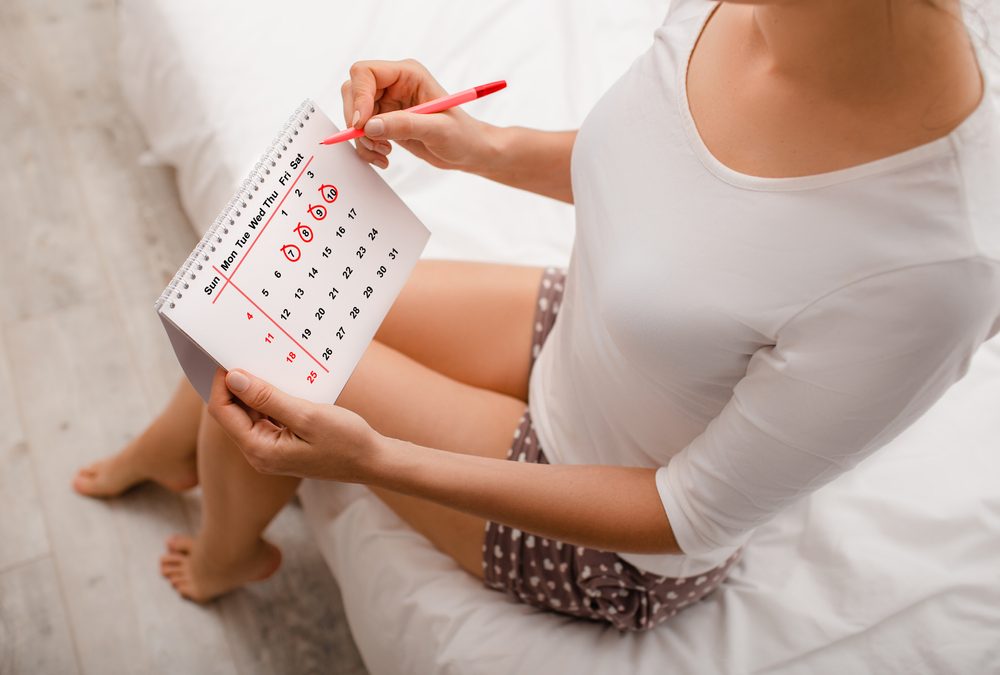 The menstrual cycle is a term used to describe the sequence of events a woman’s body goes through to prepare for a possible pregnancy each month. Changes in hormones trigger the phases of the menstrual cycle, which include: (1) the menses phase, (2) the follicular phase, (3) ovulation, and (4) the luteal phase.

Also commonly referred to as a period or menses, menstrual cycle regularity is considered an indicator of a woman’s metabolic, hormonal, and reproductive health. The same hormones that regulate menstruation also play a role in reproduction and the development of chronic disease. Menstrual cycle irregularities are a common problem in our society and occur in roughly 14% to 25% of women of reproductive age.

What is an Irregular Menstrual Cycle?

An irregular menstrual cycle is a broad term encompassing menstruation frequency, regularity, duration, and bleeding volume. Some examples of menstrual irregularities include:

The reproductive system is very complex, and a wide range of factors could influence period regularity, from daily stress to severe medical conditions. According to the Cleveland Clinic, some modifiable lifestyle factors that could impact menstruation include: gaining or losing a significant amount of weight, changing exercise routines, travel, illness, high amounts of stress, and extreme dieting or nutrient deficiencies.

While several nutrients are known to affect a woman’s health and fertility, vitamin D seems to play a unique role in menstruation. Multiple studies have emerged over the last decade demonstrating a relationship between vitamin D status and menstrual disorders, particularly menstrual cycle frequency and pain.

VIDEO: Why do you need Vitamin D?

Menstrual cycle pain, or dysmenorrhea, usually occurs just before or at the beginning of menstruation, lasts between 8-72 hours, and occurs in up to 91% of women of reproductive age. Common symptoms may include headache, fatigue, nausea/vomiting, diarrhea, and pelvic cramping. Dysmenorrhea can lead to absenteeism from important daily activities, such as work or school, and diminish overall quality of life. The role of vitamin deficiencies in dysmenorrhea has been highlighted, and evidence has been found that vitamin D plays a role.

A 2021 study published in the Journal of Obstetrics & Gynecology investigated the effect of vitamin D supplementation on pain and systemic symptoms in patients with primary dysmenorrhea, defined as menstrual pain in the absence of pelvic pathology. This was a double-blind, randomized, placebo-controlled trial conducted on over 100 females with primary dysmenorrhea and vitamin D deficiency (<30 ng/mL).

They found that participants who were vitamin D deficient and received vitamin D supplementation experienced significant reductions in pain intensity, number of days with pain, number of consumed pain-relief medications, and systemic symptom severity compared to baseline and the placebo group. This study used a weekly vitamin D dose of 50,000 IU for 8 weeks, according to the Endocrine Society clinical practice guideline.

Lasco et al. and Zangene et al. found similar reductions in dysmenorrhea symptoms with a single 300,000 IU dose five days before menstruation. According to the evidence available, vitamin D supplementation in those who are deficient, both in single and multiple doses, can reduce the severity of primary dysmenorrhea symptoms.

In humans, vitamin D3 can act on vitamin D receptors (VDRs) to modulate the expression of over 300 genes in various tissues, including those of the reproductive system. While still requiring validation, some studies suggest that menstrual disorders in women with or without Poly Cystic Ovarian Syndrome (PCOS) may be due to vitamin D’s effect on the genes that control anti-Mullerian hormone (AMH). Vitamin D receptors have been found on the promoter region for the gene encoding AMH, suggesting vitamin D can regulate AMH expression.

AMH is produced and released from the granulosa cells in the ovary and is proportional to the number of developing follicles in the ovaries. Therefore, AMH has emerged as an indirect marker of ovarian reserve. Vitamin D is likely to influence ovulatory and menstrual dysfunction by acting on genes that control AMH.

BLOG: Vitamin B12 and PCOS

Vitamin D has also been found to play a significant role in PCOS, which is often characterized by irregular periods and infertility. Correcting low vitamin D levels in those with PCOS can improve metabolic and menstrual cycle changes and follicle maturation. Vitamin D is thought to act on PCOS pathology through several mechanisms, including (1) increasing parathyroid hormone, (2) regulating the aromatase gene which controls the biosynthesis of estrogen, (3) affecting the action of insulin through vitamin D receptors on pancreatic Beta-cells, and (4) regulating calcium metabolism, which can support ovarian follicular maturation.

Furthermore, it’s theorized that vitamin D’s role in calcium homeostasis plays a role in menstrual cycle pain. Some researchers have suspected that low serum calcium levels (which can occur with vitamin D deficiency) can cause uterine smooth muscle contraction and spasms, leading to some of the pain associated with primary dysmenorrhea. Additionally, vitamin D receptors, and the enzyme responsible for metabolizing vitamin D, can be found in myometrial cells, the smooth muscle cells involved in stretching and contracting the uterus. This suggests that vitamin D may play a direct role in the pathogenesis of dysmenorrhea and the severity of symptoms.

Lastly, menstrual pain is believed to be related to the excessive production of uterine prostaglandins, which can also influence vasoconstriction and myometrial contraction. It’s suggested that vitamin D decreases prostaglandin synthesis and increases prostaglandin inactivation, thereby reducing pain and uterine cramping associated with menstrual cycles. Vitamin D also has different anti-inflammatory effects, such as its role in reducing inflammatory cytokines associated with contractile factors in the endometrium, decreasing period pain.

Low vitamin D levels are not uncommon, and in some of the studies cited up to 78% of the women included were vitamin D deficient. Low dietary vitamin D intake, shifts in lifestyle from working primarily outdoors to abundant desk jobs, increased use of sunscreen from rising skin cancer concerns, and increased environmental pollution are all contributors to the high numbers of vitamin D deficiency in society today. The Endocrine Society of North America recommends maintaining serum 25(OH)D levels above 30 ng/ml (sufficient). If your vitamin D levels are below 30 ng/ml, increasing vitamin D intake through food or supplementation is recommended.

Similarly, if you are a woman of reproductive age, knowing your menstrual cycle data trends is crucial. Health care providers suggest keeping a record of period start and stop dates, and other symptoms such as blood loss trends, headaches, or mood changes. Multiple apps available today can help you track your cycle and symptoms, or you can follow with paper and pen in your daily calendar. If you suspect your menstrual cycle has changed, or you find you are vitamin D deficient, be sure to speak with your doctor or other health care provider to determine the best way forward.