Vitamin D: Are You Getting Enough? 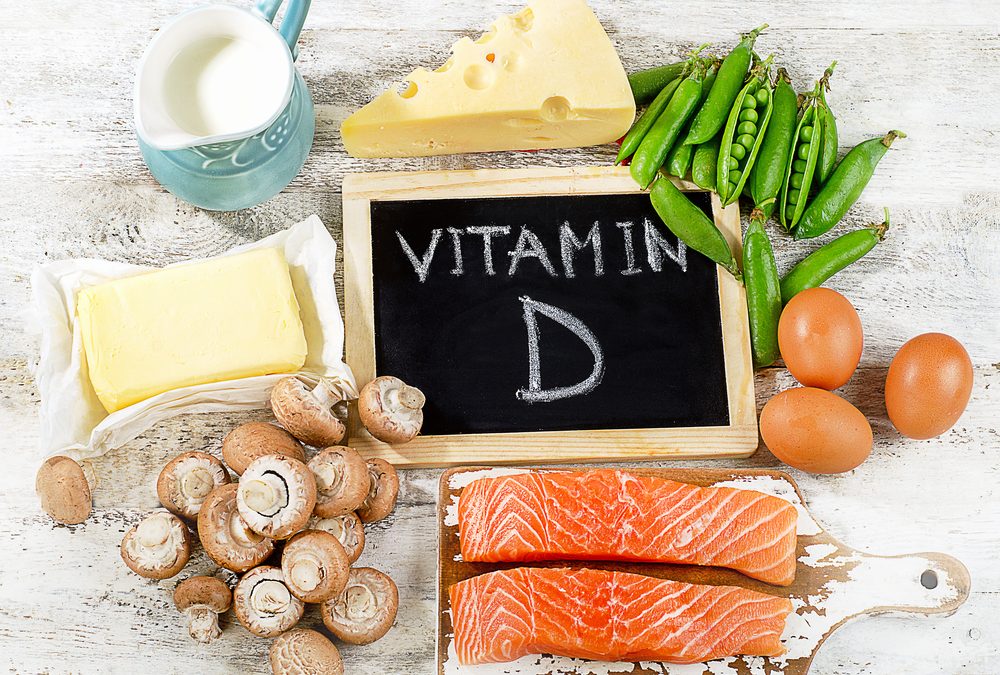 Vitamin D holds a special place among most nutrients because it is both a vitamin found in many foods and supplements, as well as a hormone that your body makes in response to the sun. Its story has also evolved considerably over the years from being a supporting actor in helping build strong bones, to playing a starring role in the prevention of several chronic health conditions associated with associated metabolic, heart, mental, immune and prenatal health. The prevailing issue among most people is that the don’t know if they are getting a protective among of vitamin D in their diet.

The good news is our bodies are very efficient when it comes to producing Vitamin D3. For example, it can produce ~200 international units (IU) of Vitamin D3 after brief UVB sunlight exposure of the arms and face (~5 minutes, without sunscreen).

But the precise amount of Vitamin D3 produced will vary depending on factors such as skin pigmentation, geographical location, season, and the time of day. For example, an individual will produce 400 IU of vitamin D3 in Boston, MA, within eight minutes of sunshine whereas the same individual may only need six minutes if they are in Miami, FL.

Vitamin D can also come from the diet, but there are very few foods in nature that contain Vitamin D. The best sources include fatty fish such as tuna, salmon and mackerel, with smaller amounts found in cheese, egg yolks, mushrooms, and fortified foods like milk and cereal.

Supplemental vitamin D comes in two forms: D2 (vegan) or D3 (animal-based). And they both come in doses up to 5,000 IU per capsule. Pharmaceutical vitamin D is in the D2 form and comes in a 50,000 IU dose to be taken once per week under doctor supervision. At OmegaQuant, we recommend 1,000-2,000 IU/day of supplemental D3 to get to a blood level of 30 ng/mL.

As far as health benefits, Vitamin D is probably best known for being important for bone health, but there are other aspects of health where it plays a role. In fact, it has also been associated with improved metabolic, heart, mental, immune and prenatal health. But what level should you shoot for and why?

According to the US National Institutes of Health (NIH), vitamin D’s main function is to help the body absorb calcium (one of bone’s main building blocks) from food and supplements. People who get too little vitamin D may develop soft, thin, and brittle bones, which can lead to a condition known as rickets in children and osteomalacia in adults, although these have nearly been eradicated in North America due to food fortification and vitamin D supplementation.

NIH points out that vitamin D is also important to the body in many other ways as well. Muscles need it to move, for example, and nerves need it to carry messages between the brain and every body part. Meanwhile, the immune system needs vitamin D to fight off invading bacteria and viruses.

Are You Getting Enough Vitamin D?

Here are what some of the leading health authorities say about how to categorize vitamin D levels:

At OmegaQuant, we have set the optimal serum level of total vitamin D at 30 ng/mL and the upper level at 100 ng/mL.

The evidence for the 30 ng/mL cut off is demonstrated by Garland et al. 2014 where the hazard rate for mortality plateaus around 30 ng/mL, by Michaelsson et al. 2010 where the lowest risk for death from all-causes, cancer and cardiovascular disease is at 30 ng/mL, by Ginde et al. 2009 where those with levels >30 ng/mL have the lowest risk of upper respiratory tract infections, and by Miliku et al. 2016 where pregnant women with levels >30 ng/mL were at the lowest risk of preterm birth, as well as babies born with low birth weight and small for gestational age.

From OmegaQuant’s perspective, Vitamin D levels should be considered more from a “whole health” perspective than specific to bone health, thus the higher target of 30 ng/mL.

There are virtually no side effects with vitamin D when taken in appropriate doses. In fact, the National Academy of Medicine recommends an upper limit of 4,000 IU of vitamin D per day. Vitamin D toxicity can occur and results in calcium levels becoming too high, but this is extremely rare.

Typical vitamin D testing requires a blood draw, which is sent to a lab for analysis. However, new advances in technology have paved the way for a simpler approach. Now, doctors and patients can access an easy-to-use dried blood spot test that requires a quick finger stick and a few drops of blood. From those blood spots, accurate analysis of one’s blood level can be easily and safely analyzed.

Correction of vitamin D deficiency is quite simple with the use of over-the-counter vitamin D supplementation. The American Geriatrics Society recommends vitamin D dose of 800 to 1000 IU by oral supplementation daily to reduce the risk of falls and fractures.

Most pharmacies carry vitamin D in doses of 400 IU to 2000 IU per tablet. Other formulations such as a liquid formulation is available for children and an injection for people with gastrointestinal absorption issues.

There are virtually no side effects with vitamin D because it is a natural hormone. The Institute of Medicine recommends an upper limit of 4000 IU of vitamin D per day.  In cases where there is vitamin D toxicity, calcium levels may be too high but this is extremely rare.

It is also important to consider the individual response to supplementation. For example, obesity decreases responsiveness to supplementation, and so can the effect of season and sunlight exposure. Skin exposed to UVB light, in particular, is very efficient at making vitamin D in the absence of sunscreen. However, due to the increase of sunscreen use as well as increased indoor time, dietary and supplementary vitamin D appears to be an appropriate response to these societal changes.

Vitamin D Is Popular, BUT Most People Don’t Get Enough

In a 2019 survey by the Council for Responsible Nutrition (CRN), vitamin D was listed as the most popular vitamin just behind multivitamins among US adults. Other popular vitamins and minerals cited were B vitamins, vitamin C and calcium. Nearly half of those 55 and older take vitamin D. 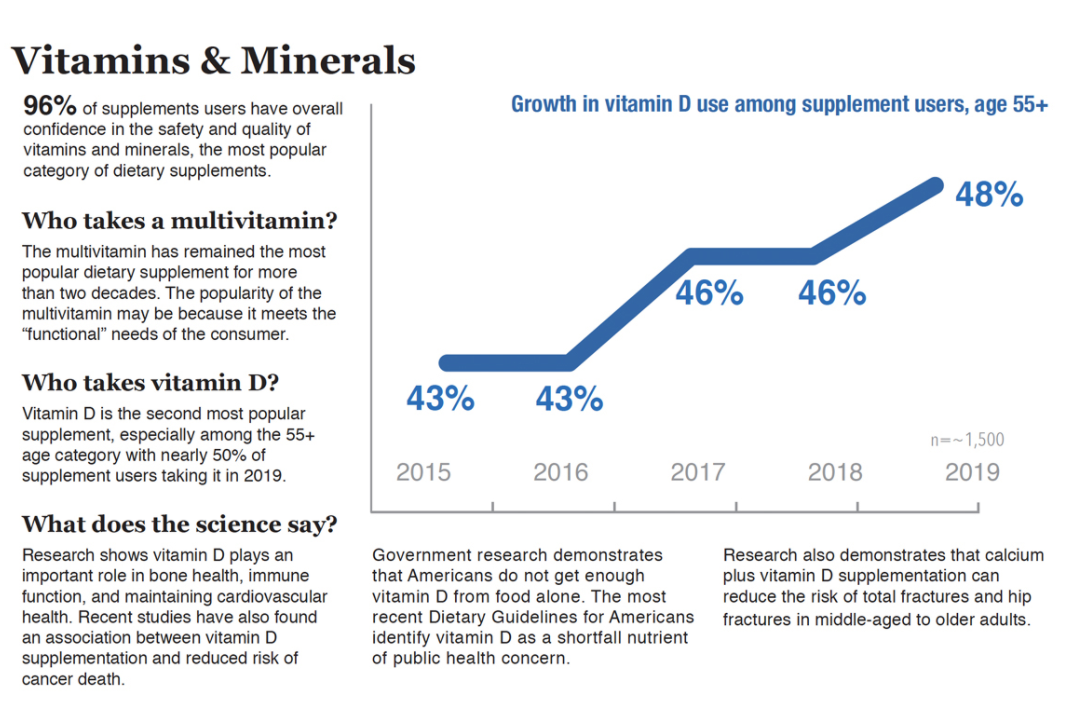 CRN issued a statement in April 2018 to remind people that no one is exempt from the need to obtain adequate amounts of vitamin D and calcium. “Both nutrients are critical to overall health, especially bone health, and most people do not get enough of either, which is why the government has identified both vitamin D and calcium as nutrients of public health concern in the 2015 Dietary Guidelines,” the organization said.

“We also remind consumers to talk with their doctors or other healthcare practitioners about developing their own individualized plan that evaluates their vitamin D and calcium status for possible deficiency and considers the potential benefits of supplementation, especially those people at risk of osteoporosis or vitamin D deficiency.”

According to the Harvard School of Public Health, there’s a lot scientific debate about how much vitamin D people need each day. The Institute of Medicine, in a long-awaited report released on November 30, 2010, recommended tripling the daily vitamin D intake for children and adults in the U.S. and Canada, to 600 IU per day.

The report also recognized the safety of vitamin D by increasing the upper limit from 2,000 to 4,000 IU per day, and acknowledged that even at 4,000 IU per day, there was no good evidence of harm. “The new guidelines, however, are overly conservative about the recommended intake, and they do not give enough weight to some of the latest science on vitamin D and health,” Harvard School of Public Health noted. “For bone health and chronic disease prevention, many people are likely to need more vitamin D than even these new government guidelines recommend.”

It has been discussed in previous BLOGs how important nutritional status testing is and how it can help people make real, substantive changes in their lives. The Omega-3 Index test measures the amount of the most important omega-3s in your diet, EPA and DHA. It is these omega-3s that have been the subject of more than 40,000 studies, according to the Global Organization for EPA and DHA Omega-3s (GOED).

Testing your vitamin D level is easy and getting a test is even easier – no doctor or prescription necessary. We at OmegaQuant realize the value of vitamin D to health and want to make this test available to consumers so they can test, track and continue to improve their vitamin D status, just as they’ve done with omega-3s.

Now that you know how important vitamin D is, put it to the test. Only then will you know whether your diet is providing enough. Our new vitamin D test works the same way our Omega-3 test does – with a simple finger poke. No blood draw needed. No doctor necessary. No hidden lab fees. And you can collect your sample safely, in the privacy of your own home.