What Are B12 Injections? And Are They Safe? 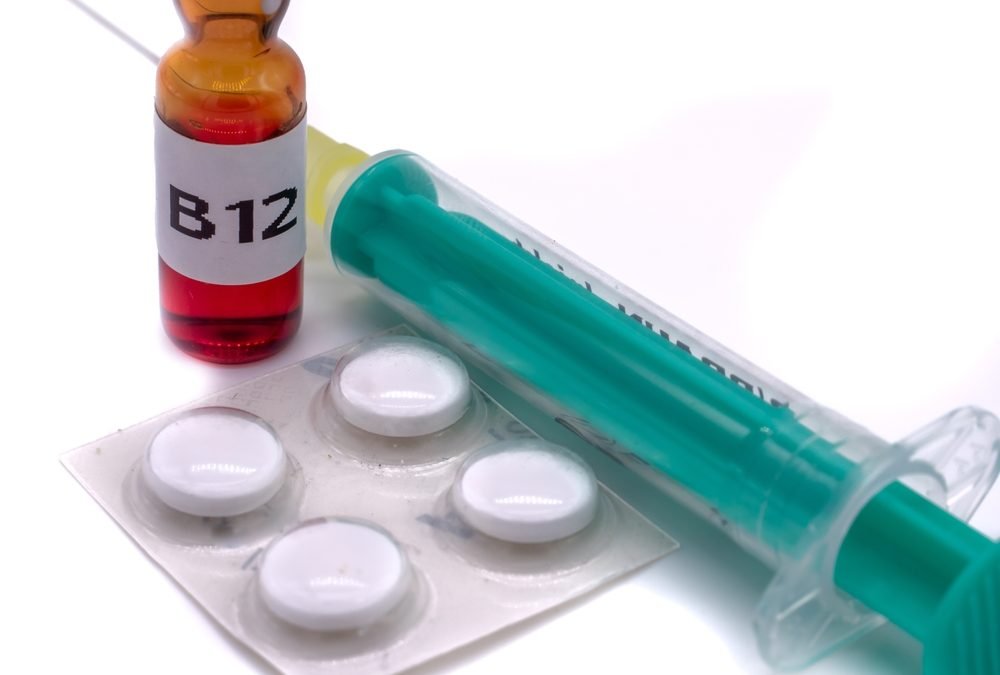 Back in the day, President Kennedy and Jackie were rumored to get regular “vitamin cocktail injections” that included B12 along with amphetamines. Fast forward to the present and Madonna, Rhianna and Gwyneth are rumored to be among the single-named glitterati who partake in B vitamin shots or IV drips. And it’s not just the women. Justin Timberlake and Simon Cowell are two additional celebrities thought to partake in this practice.

BLOG: Are You Getting Enough Vitamin B12?

But really, who needs B12 injections? And are they safe?

Before we go there, let’s first get a quick refresher on some vitamin B12 basics.

B12—also known as cobalamin—is one of the eight B vitamins, all of which are termed essential. Your body doesn’t produce B12 on its own, but most people are able to get adequate B12 from food (and, as needed, nutritional supplements).

Vitamin B12 is naturally found in fish, meat (especially beef and beef liver), chicken, eggs and some dairy products such as milk. Some foods, including certain cereals, are fortified with B12.

Vitamin B12 serves a foundational function in your body, producing red blood cells to deliver oxygen throughout. In addition, B12 helps your nerve cells work properly and manufactures the genetic material—DNA—that makes up the 30 trillion or so of your body’s cells.

Some research has shown that B12 may play a helpful role in mood disorders and cognition, from depression to memory loss, maybe even dementia. But the science is ongoing and far from conclusive—although you do absolutely need adequate B12 to help your brain work properly.

BLOG: Are B Vitamins Good for the Brain?

B12 is perhaps best known for its role in energy and helping prevent anemia, a dysfunctional red blood cell condition that makes you weak and tired.

So, with all of these benefits and with three mainstream options for obtaining B12 vitamins—conventional food, functional food and nutritional supplements (plus a few not as well-known routes, such as prescription pills, nose spray, nasal gel or under-the-tongue medication)—does anyone really need vitamin B12 injections?

The answer: some people do. You may not be one of them—despite the fact that your favorite celebrity may be pumping up the volume on B12 injections.

What are B12 injections?

If you google hard enough, you’ll discover that an internist in the 1960s at The Johns Hopkins Hospital in Baltimore, Maryland, is credited as being the one to introduce vitamin cocktails in injectable or intravenous forms. The doctor, John Myers, was concerned that only a small fraction of the vitamins taken through diet or supplementation was actually being absorbed into the bloodstream. Thus, an alternative method was born.

Vitamin B12 shots require a prescription from a doctor. Although, some say as interest in these shots is growing, so is a trend for health and wellness clinics, and even naturopaths, to provide them to clients and walk-ins, without a prior prescription.

BLOG: How to Choose a B12 Supplement

When you get a vitamin B12 shot, the injection is most likely cyanocobalamin or hydroxocobalamin or the natural form methyl-cobalamin. The shot is injected into the muscle or under the skin. It may also be injected into a vein, but a portion would likely be secreted through your urine. While through the vein may be the quicker way to get results, into the muscle may allow the vitamin B12 to last longer in your system.

You can inject the shots yourself, but it doesn’t mean you should, at least not without the approval or guidance of a doctor or other healthcare practitioner.

While the celebrity buzz surrounding these needle-based options may be trendy, and certainly are necessary for some people, should they really be the first option for everyone? In other words, just because you can find doctors (or places) that will inject or insert to your heart’s content, does that necessarily mean it’s a good idea? You may ask, are B12 injections better than tablets? For some the answer is yes; however, for most, the answer is probably no.

Let’s take a look at why. B12 injections are touted for all sorts of reasons, including weight loss, mental health, cognitive function, energy or fatigue, vitamin B12 deficiency, and anemia. This article notes that fans of vitamin B12 injections believe the shots can also speed up metabolism, help improve sleep patterns, improve food and increase concentration, boost the immune system and may even help with hair growth or stop hair loss.

Think about it. If most people can get what they need from the food they’re already eating and the supplements they’re choosing, why go to the added expense and time of vitamin B12 injections?

Here’s the answer. Certain populations are not getting enough B12 from food: vegetarians and vegans who are not animal-eaters may find it difficult to hunt up the B12 because they’re not getting it from meat or poultry or dairy. Plant sources, unless they are fortified, do not provide vitamin B12.

Even if you’re the best meat eater ever, there is still the possibility that you belong to the group of consumers who may need a boost of B12: those with digestive issues resulting in trouble absorbing the nutrient.

As this piece explains it, proper vitamin B12 absorption is reliant on a protein produced by cells in your stomach lining—intrinsic factor—that help your intestines absorb vitamin B12. Intrinsic factor binds to vitamin B12, and without enough of that protein, you can become deficient.

If you’ve had weight loss surgery or other intestinal surgery or have diseases such as Crohn’s or celiac, you may also be at risk for B12 deficiency. Same for those taking certain medications. For example, metformin and some heartburn, anti-seizure and antibiotic medications may also decrease your absorption of B12.

And if you’re “old,” this may be a case of 50 not being the new 40. In addition to sleep becoming more difficult and skin showing more lines than an Aaron Sorkin script, the fact is that B12 absorption can decrease with age. (By the way, you’re not so “old” if you know who Aaron Sorkin is, if that makes you feel better.)

BLOG: The ABC’s of B Vitamins

If you’re going to be deficient (or insufficient) in one of the B vitamins, it’s most likely that B will be B12. According to statistics, B12 deficiency is probably the most common of the B vitamin deficiencies in the U.S., affecting between 3% and 43% of older adults.

Which brings us to the top three reasons why you might benefit from—and why your doctor might recommend—B12 injections:

But what about if you’re looking for energy? Well, consider this a chicken and an egg situation. As this article reminds us, B12 can up your energy but only if you’re deficient in the vitamin. If you are deficient, a B12 injection will likely help increase your energy levels.

Are B12 injections safe?

To start, vitamin B12, even at high doses, has not been shown to cause any harm. However, that doesn’t mean there aren’t potential side effects from B12 injections.

For example, this article lists several potential side effects from the injection itself—such as pain, redness or itching at the site of the injection, temporary itching of the skin, and mild diarrhea—with the advice that if those issues persist or get worse, you should seek medical advice.

More serious reactions to the injection could include difficulty breathing, hives, or swelling, which could be a sign of anaphylaxis. In those cases, emergency medical help could be required.

The same article mentioned above provides advice on drug interactions with vitamin B12, listing three in particular to be aware of: metformin, proton pump inhibitors, and H2 receptor antagonists.

And this doctor says that large amounts of B12 injections aren’t likely to harm your health; however, he advises that B12 can interfere with some medications, so check with your doctor about whether or not vitamin B12 injections are right for you.

In fact, you should let your doctor (or the doctor giving you the B12 shot, if it’s someone else) know about not only your prescriptions, but also your over-the-counter medications and other dietary supplements you’re taking before getting a vitamin B12 injection. Also be sure to communicate about any allergies or other medical issues.

In particular those with a history of certain disease may not be candidates for B12 injections, including (but not all-inclusive) those with sensitivity to vitamin B12, kidney problems or deficiencies in folic acid or iron. Here’s another helpful article specifically on side effects and those who may want to stay away from B12 shots.

How do You Know if You’re Vitamin B12 Deficient?

You can learn more about signs and symptoms of B12 deficiency through this blog on our site. Or this post gives you five simple questions to answer, which may be a hint that you’re vitamin B12 deficient.

However, the only way to really know if you’re deficient in B12 is to get tested. Talk to your doctor about getting a simple blood test or consider taking an at-home urine-test, which can be ordered online from OmegaQuant.

TOOL: Learn About a New B12 Test from OmegaQuant