What Do Your Omega-3 Index Results Mean? 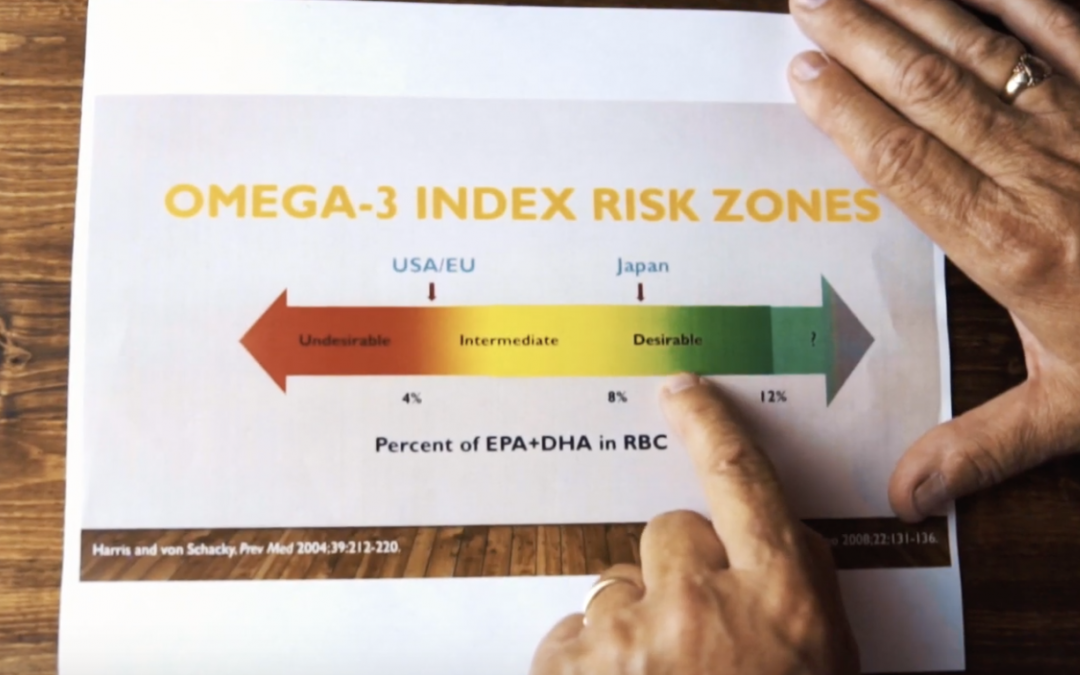 So you’ve ordered an Omega-3 Index test, collected your blood sample, and submitted it to the OmegaQuant lab. Now you’ve received your results and you’re wondering what they mean and how you can take action if you need to raise your score.

In this blog, we will address several of the most common questions posed by people who received their results and want a better understanding of what they mean.

First, let’s review what the Omega-3 Index actually is. The Omega-3 Index is a measure of the fatty acids called EPA (eicosapentaenoic acid) and DHA (docosahexaenoic acid) in your red blood cell membranes. What we do is measure all of your fatty acids in a red blood cell membrane and then take the amount of EPA and DHA over all of the fatty acids and get a percentage. So your result could be 4% or 6% or 8% and so on. For example, if your result is 6%, then that means 6% of your fatty acids are represented by EPA and DHA.

Research has consistently shown that an Omega-3 Index level of 8-12% is linked to better health outcomes for general wellness, as well as for your heart, brain, eyes, and joints. However, most people globally have an Omega-3 Index below 8%. Let’s understand why.

For this study, Dr. Jackson and her team evaluated blood levels of omega-3s EPA and DHA from almost 3500 people, alongside questions about their fish and supplement intake.

If you want to rely on fish to improve or maintain your Omega-3 Index level, make sure you are using the fish table provided in your omega-3 results report to choose fish with higher levels of EPA and DHA.

It’s possible to eat fish frequently but not choose fish with lots of EPA and DHA and have a lower Omega-3 Index. Even fish that are supposed to be high in omega-3s, like Atlantic farmed salmon, can have varying levels based on their own diet. While eating fish is more of a guessing game than taking supplements, it is also more delicious. However, the only way to truly know if the fish you are choosing are impacting your blood level is to take an Omega-3 Index test.

TOOL: Follow this helpful guide from the Seafood Nutrition Partnership on choosing fish rich in omega-3s EPA and DHA.

The biggest determinant of the Omega-3 Index is the dose of EPA+DHA, so make sure you know what you are getting in your supplement. To determine this, look at the back of your bottle at the Supplement Facts Panel and find the Serving Size, and then locate the specific amounts of EPA and DHA. It’s a good idea to only buy supplements that clearly list the amount of EPA and DHA separately. Often there are a lot of other fats in these pills so it’s important to make sure you choose those delivering sufficient amounts of EPA and DHA.

Typically for most average people having a 5-6% Omega-3 Index you likely need around 1000 mg of EPA and DHA a day. And you don’t necessarily have to take that every day, you could spread that out over the course of a week, just as you would if you ate fish 2-3 times per week. It helps to think about fish and supplement intake in the same vein in that if you take a higher dose one day and forget the next it’s going to be ok.

In general, phospholipids and triglycerides are absorbed better than ethyl esters. Liposomal or emulsified omega-3s also make the fat more available for absorption. However, all of these aspects are secondary to the dose of EPA+DHA and how much you want to spend.

Recommendations for the general public are often lower than what it will likely take for you to get your Omega-3 Index in the desirable zone of 8% or above. Also keep in mind that these are generalizations for populations that are not based on YOUR body.

To give a more personalized, research-based dosing suggestion, we made an omega-3 calculator on our website that allows you to put in your Omega-3 Index now and what your target goal is. After following these steps, the calculator will give an estimate of how much EPA+DHA you’ll need in addition to your current intake to meet your Omega-3 Index goal.

Can Your Omega-3 Index Be Too High?

As with any nutrient, it is possible to get too much omega-3. However, we don’t know what level that is and we don’t have any evidence that higher Omega-3 Index levels we have seen (>20%) have negative outcomes.

A good example is the Japanese, who have Omega-3 Index levels in the 9% range on average due to their high fish diet. They live longer and have less heart disease despite having higher blood pressure and smoking more.

At OmegaQuant we recommend 8-12% Omega-3 Index range because we don’t see a lot of people above 12% to be able to make a determination about benefit or harm above 12%.

What About Plant-based Omega-3s in Walnuts, Almonds, and Chia Seeds?

The type of omega-3 in these types of foods is called alpha-linolenic acid (ALA) and it can be converted to some extent to EPA and an even lesser extent to DHA in the body. However, it takes A LOT of ALA to make a dent in EPA levels and DHA levels typically aren’t affected.

If you want to take a plant-based omega-3 supplement to raise your Omega-3 Index, try algal DHA supplements. They are made from the microalgae that the fish eat. They are totally vegan and effective.

If you ordered your Omega-3 Index test online, it’s a good idea to talk to your healthcare provider before changing your diet or adding supplements to your routine. In general, fish and fish oil supplements are a very low risk intervention.

VIDEO: Talk About Your Omega-3 Index Results with Your Healthcare Provider

Also, if you are changing your diet, we would recommend re-testing every 3-4 months until your Omega-3 Index levels are stable and so is your diet. Then you can test every 6 months to a year to make sure you are staying on track. It’s also good to take note of any improvements in your health, like dry eye or aching joints, as your Omega-3 Index increases.

OmegaQuant continues to collaborate with premier research teams all over the world to learn more about what the optimal Omega-3 Index is for different conditions and to confirm our 8% target. So far the Omega-3 Index has been used in more than 200 studies worldwide, including thousands of subjects. And to date, we have worked with more than 100 research institutions. We are proud of the progress we’ve made with the Omega-3 Index test as the premier tool for establishing omega-3 status.

For more information on omega-3s and our omega-3s tests, visit our FAQ section to learn more.

INFOGRAPHIC: Why Choose the Omega-3 Index Test from OmegaQuant