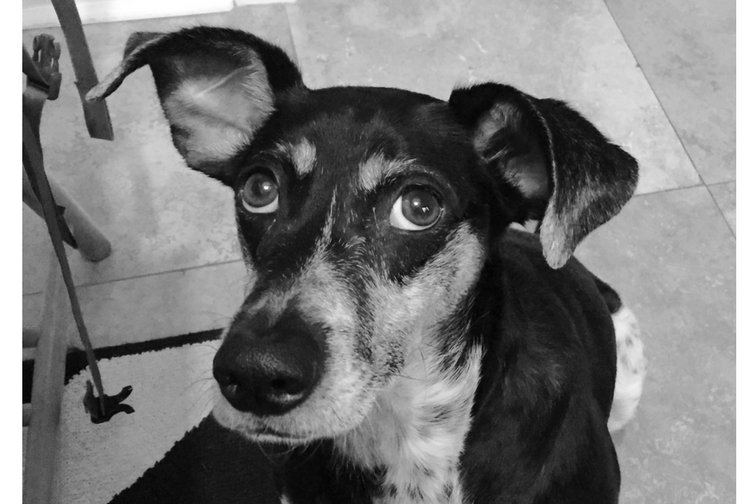 We love our dogs. Seeing them in pain with arthritis at 7 or 8 years of age is as painful to us as it is to them. With years of life ahead of them, we want to help them continue to run, hike, walk, chase and jump up on the bed. Many people turn to anti-inflammatories, like NSAIDS, to help lower the inflammation that goes along with arthritis, but those can have harmful side effects especially if used every day. There must be a better way! Here we describe a study conducted by veterinarians led by Dr. Stephen Mehler in collaboration with Bill Harris, the President of OmegaQuant, that tested the hypothesis that increasing omega-3 EPA + DHA blood levels (which simultaneously lowers omega-6 arachidonic acid [AA] blood levels) would help to relieve arthritis symptoms in older dogs.

Randomized, placebo-controlled, blinded study: Seventy-eight dogs of all breeds were assigned to either placebo (n=33) or a body weight-adjusted dose of EPA+DHA in triglyceride form (~69 mg EPA+DHA/kg/day, n=41). Dogs were examined at baseline, after 42 and 84 days of supplementation by a blinded veterinarian (meaning they didn’t know which dogs had the omega-3 supplements and which had the mineral-oil placebo). The veterinarian used multiple, research-based scales to assess and quantify the extent of the arthritis (focused mainly at the hips [coxofemoral] and “knees” [stifle] joints). These measures were the Lameness Severity Score, Lameness/Discomfort Score, and the Total Joint Score. Lastly, the background diet of the dogs was taken into consideration but was not controlled, meaning the dogs remained on their normal dog food regimen but food samples were assessed for fatty acid content and included in statistical analyses.

The iFATS score (also called the Omega Ratio), a new blood fatty acid metric associated with arthritis severity in dogs: The iFATS score, which is the ratio of AA (omega-6):EPA+DHA (omega-3s) in whole blood, was strongly associated with 2 of the 3 arthritis measures, the Lameness Severity Score and the Lameness/Discomfort Score, at both baseline and day 84. This means that a high iFATS score correlated with greater arthritis discomfort and a lower iFATS score correlated to lower levels of discomfort. To measure the iFATS score, a drop of whole blood was placed on a piece of treated-filter paper and sent to the OmegaQuant laboratory. Likewise, the omega-3 treatment group showed improvements in all arthritis measures compared to the placebo group after 84 days of supplementation. EPA and DHA levels increased and AA levels decreased significantly in the treatment group and were unchanged in the placebo group.

A quick note on omega-6:omega-3 fatty acid ratios: The theory behind the omega-6:omega-3 ratio is that the higher the ratio, i.e. more omega-6 and less omega-3, the greater the inflammation in the body. While there are many caveats to this idea, the specific omega-6 and omega-3s in the iFATS score (AA and EPA+DHA, respectively) are much more closely related to pro- and anti-inflammatory metabolites than shorter chain omegas, such as linoleic acid (LA) and alpha-linolenic acid (ALA). A total omega-6:omega-3 ratio may have less of a connection to inflammation levels because there is much more LA and ALA in blood than AA and EPA+DHA. The bottom line is it’s important to know which fatty acids are included in a ratio score.

This study shows how blood fatty acid levels, particularly the iFATS score, relates to one of the most debilitating aspects of aging in dogs – arthritis. Lowering the iFATS score (through EPA+DHA supplementation) is simple, effective, relatively inexpensive and safe; however, testing for the iFATS score is a necessary step to ensure that your dog reaches levels that are associated with improved mobility and less pain.