4 Things Vitamin D and Omega-3s Have in Common 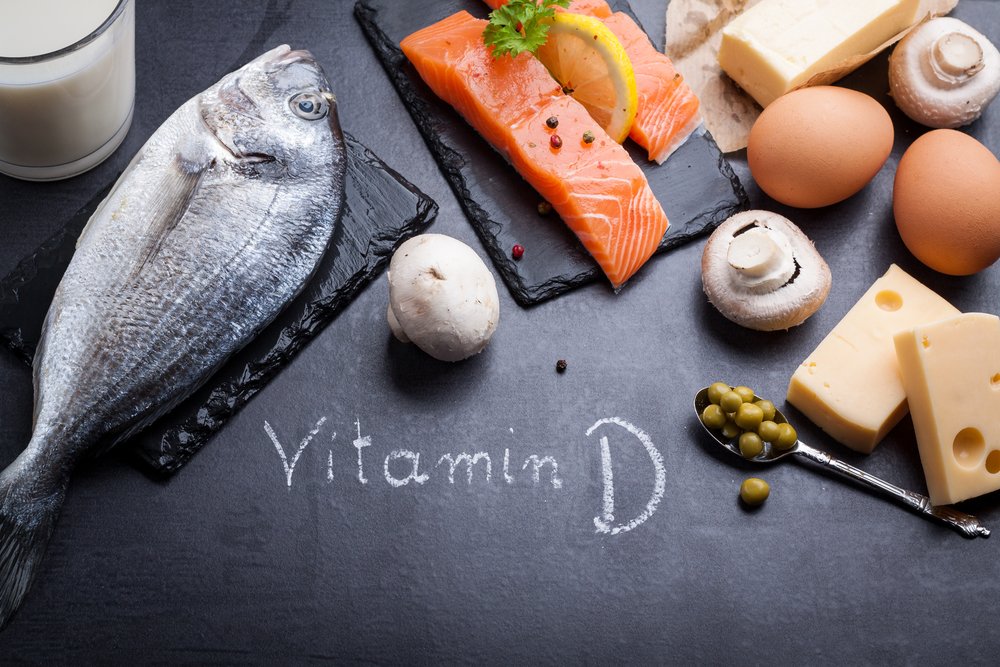 #1 – Both vitamin D and omega-3s play important roles in health as evidenced by the thousands of studies attesting to their benefits for a wide range of health issues, many of which overlap.

Vitamin D has played a major role in bone health for decades. During the last several years, however, new research has brought to light the crucial role it likely plays in a wide range of other health issues, from cardiovascular disease to immune function to obesity.

According to the medical definition of vitamin D, it is described as a steroid vitamin that acts more like a hormone than a vitamin, and it promotes the intestinal absorption and metabolism of calcium and phosphorus.

The definition goes on to say that under normal conditions of sunlight exposure, no dietary supplementation is necessary because sunlight promotes adequate vitamin D synthesis in the skin. However, skin production of the active form of vitamin D depends on exposure to sunlight, which can be limited for many people throughout a given year, and even depending on where they live.

Vitamin D can also be found in eggs, fish, beef and dairy products. But again, for people who have dietary preferences that don’t include many of these food groups, they can fall short.

And then there’s vitamin D supplements, which is where many people turn when the above options don’t work for them. But sometimes compliance can be an issue.

As for omega-3s, these important nutritional fats that go by the abbreviations EPA and DHA, are found in marine sources like fish, shrimp and krill in varying amounts. EPA and DHA are found in every cell membrane in the body and their purpose is to help the cells maintain proper function and flexibility, which contribute to the healthy function of the blood vessels, heart, immune system, eyes and brain.

Like vitamin D, omega-3s have been the subject of thousands of clinical trials. In fact, they’ve been studied more times than Lipitor, acetaminophen and vitamin C.

#2 – Both vitamin D and omega-3s are popular among consumers, but still, most don’t get enough.

A recent article on omega-3 trends says nearly one-third of consumers claim they feel deficient in omega-3s, which has increased 34% since 2010. While probiotics and protein show stronger growth over the same time period, omega-3s have consistently been on top as a nutrient consumers feel they need.

Further research from the Natural Marketing Institute (NMI) showed two in five consumers would like to add more omega-3s to their diets. “Despite consumers feeling deficient and wanting to add more into their diets, however, two-fifths of the population do not know any health benefits of omega-3s. In fact, less than one-third of the population are aware of omega-3’s effect on heart health—the benefit most traditionally associated with the nutrient,” the market research firm said.

According to a 2017 consumer survey conducted by the Council for Responsible Nutrition (CRN), omega-3s represent the most popular “specialty supplement” among US adults, in front of probiotics, fiber, melatonin and glucosamine/chondroitin. 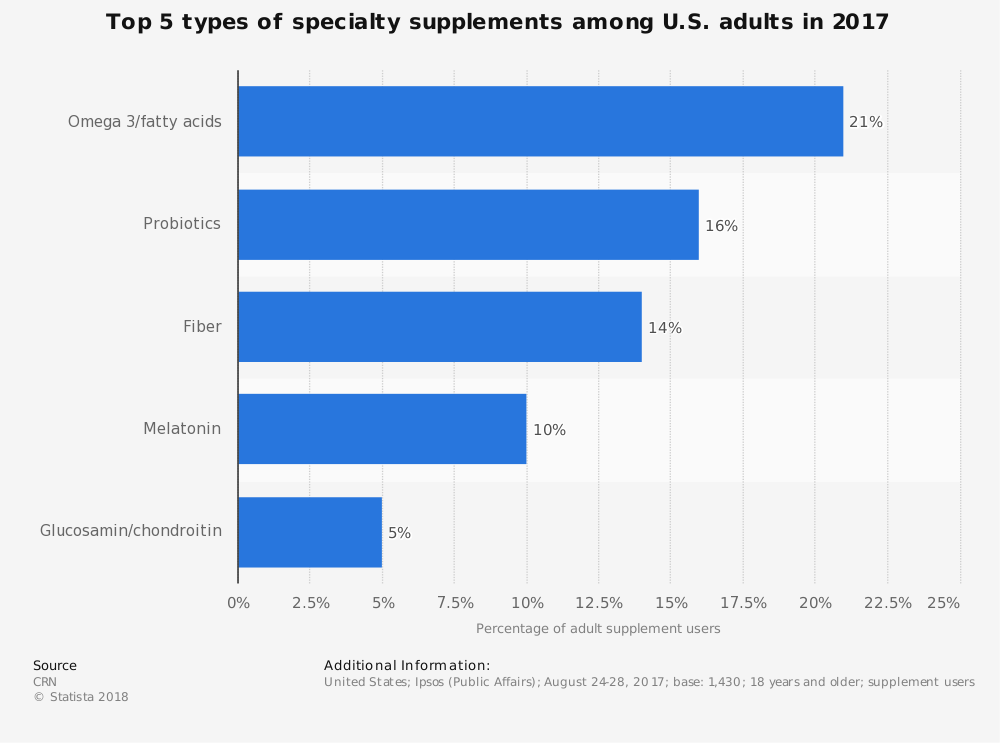 In the same CRN survey, vitamin D was listed as the most popular vitamin just behind multivitamins among US adults. Other popular vitamins and minerals cited were B vitamins, vitamin C and calcium. 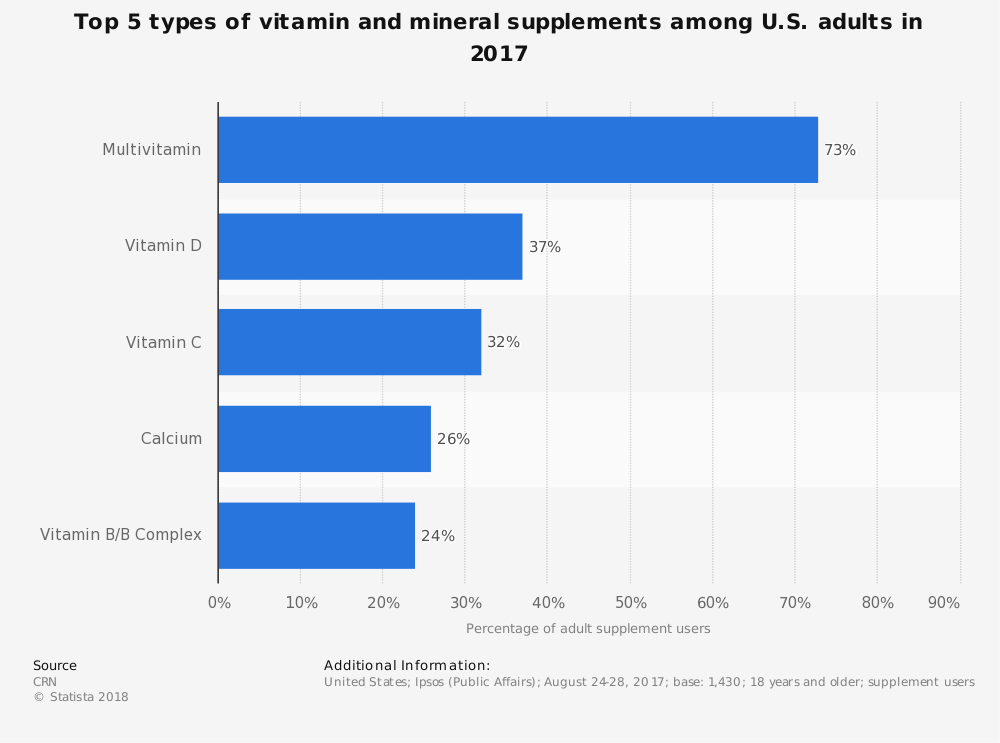 CRN issued a statement in April 2018 to remind people that no one is exempt from the need to obtain adequate amounts of vitamin D and calcium. “Both nutrients are critical to overall health, especially bone health, and most people do not get enough of either, which is why the government has identified both vitamin D and calcium as nutrients of public health concern in the 2015 Dietary Guidelines,” the organization said.

“We also remind consumers to talk with their doctors or other healthcare practitioners about developing their own individualized plan that evaluates their vitamin D and calcium status for possible deficiency and considers the potential benefits of supplementation, especially those people at risk of osteoporosis or vitamin D deficiency.”

According to the Harvard School of Public Health, there’s a lot scientific debate about how much vitamin D people need each day. The Institute of Medicine, in a long-awaited report released on November 30, 2010, recommended tripling the daily vitamin D intake for children and adults in the U.S. and Canada, to 600 IU per day.

The report also recognized the safety of vitamin D by increasing the upper limit from 2,000 to 4,000 IU per day, and acknowledged that even at 4,000 IU per day, there was no good evidence of harm. “The new guidelines, however, are overly conservative about the recommended intake, and they do not give enough weight to some of the latest science on vitamin D and health,” Harvard School of Public Health noted. “For bone health and chronic disease prevention, many people are likely to need more vitamin D than even these new government guidelines recommend.”

A 2010 editorial suggested that vitamin D deficiency is an ignored epidemic of global proportions.

A more recent articlein Pediatrics says there has been a marked increase in diagnosis of vitamin D deficiency in children over the past decade.

The issue of omega-3 deficiency is similarly widespread. A May 2016 study that assessed the omega-3 status of people around the globe came to the stunning realization that most people are dangerously low, putting them at 60-90% higher risk of sudden cardiac death. The areas with the lowest Omega-3 Index values were North and South America, parts of the Middle East and India. Considering the traditional diets of these countries, the Omega-3 Index values match what researchers would expect to see.

While vitamin D and omega-3s have been studied thousands of times on their own, some believe their impact could be even more significant when put together. At least that is the mindset of the researchers behind the VITAL study, who are looking into whether 2000 IU of vitamin D3 and 1 gram of omega-3s (EPA and DHA) alone and in combination vs. placebo have any impact on developing cancer, heart disease, and stroke, and even late-life depression.

This study includes more than 25,000 subjects, who started in 2010 and concluded the pill-taking phase in December last year. Once researchers compile the data over the next couple of years, there will be a steady stream of findings that will help shed light on whether or not these nutrients are truly a dynamic duo when it comes to preventing any of these serious health issues.

#4 – Both vitamin D and omega-3 status can be assessed using simple nutritional tests.

It has been discussed in previous BLOGs how important nutritional testing is and how it can help you make real, substantive changes in your life. The Omega-3 Index test measures the amount of the most important omega-3s in your diet, EPA and DHA. It is these omega-3s that have been the subject of more than 30,000 studies.

Want to test your Omega-3 Level? See how it works HERE.

Testing your vitamin D level is easy and getting a test is even easier – no doctor necessary. We at OmegaQuant realize the important value of vitamin D to health and want to make this test available to consumers so they can test, track and continue to improve their vitamin D status, just as they’ve done with omega-3s.

Now that you know how important vitamin D is, put it to the test. Only then will you know whether your diet is providing enough. Our new vitamin D test works the same way our Omega-3 test does – with a simple finger poke. No blood draw needed. No doctor necessary. No hidden lab fees. And you can collect your sample safely, in the privacy of your own home.

Get your Vitamin D Test HERE.

Last but not least, correcting a relative omega-3 or vitamin D deficiency is easy! All you have to do is consume more of these nutrients through your diet or take a nutritional supplement.